This is an image of GFL99-411 ‘Abagail’ a quite remarkable breeding hen for Ganus Family Loft.

She was bred in 2009 from ‘Rocket’ the legendary Dutch National Ace winning cock of Rinus Van Gastel of Roosendal and owned by Ganus Family Loft where he became a truly World Class breeder. ‘Rocket’ could have been a double National Ace Winner for two years on the trot however Mr Van Gastel did not enter his results in time for the first year. He did however make sure he was in time for the second year when ‘Rocket’ once again raced fantastically well.  ‘Rocket”s origin is the old Jacques Tournier, Lommel bloodline that has stood the test of time at the very highest level.

Dam of ‘Abagail’ is the sensational breeding hen ‘Mona Lisa’ that Mike considers his best ever! and he has had many. The winnings of her offspring into the fourth generation runs into the Millions of Dollars and Ace Awards in the biggest One Loft and Futurity races in the World.

The first good racer that ‘Abagail’ started when she was a yearling with ‘Laughing Jewel’ winner of 1st,4th,4th,4th in the 2011 SAMDPR training races.

‘Mike Has A Very Good One’ was clocked on the edge of darkness after over 13 hours on the wing to win 53rd place overall. She also scooped the pools to take her total winnings over the series to over $100,000!

Ado Family Loft a friend of Mikes has ‘Winston’ bred from ‘Mike Has A Very Good One’ therefore a grandson of ‘Abagail’ that bred him ‘Hoosier Treasure’ winner of equal first with only two on the drop ,ten minutes ahead winning $30,000 in 2016.

Ado also has ‘Triple 8’ a direct son of ‘Abagail’ that bred his equal first in the final and 1st Ace Pigeon in the Pacific North West Challenge One Loft Race 2015.

Ganus Family Lofts wins 1st Prize and $200,000 in the 2018 Victoria Falls One Loft Race with ‘Red Monkey’ bred from a daughter of ‘Abagail’.

This is only a partial breeding record for ‘Abagail’ a truly amazing breeding hen. Total winnings of her offspring is approaching $600,000 in just five breeding seasons!

The result was selecting a son and daughter.

The son is GFL17-87 ‘Witpen Mike’ and he was chosen not only because of his mother but also the strength of his father ‘Strain Maker’ .  The origin of this top breeding cock is mainly Vandenabeele blood with a little of the old Hofkens lines that has been tested in the toughest competition. His own half brother won 2nd in the Final of the prestigious Carnival City One Loft Race in South Africa. ‘Strain Maker; himself bred ‘Said in Spun Silver’ winner of 2nd Place in the 2013 SAMDPR arriving with ‘Untamed Desert’ the winner that Mike also bought. ‘Said in Spun Silver’ also won the 1st Knock Out Competition and was 4th Overall Ace Pigeon against 2,793 birds in the final from 553 km in a 95 degree heat and headwind. His total winning was $145,000. When paired to ‘Untamed Desert’ he bred ‘Margo’s Treasure’ that in turn bred ‘Laura is a Big Winner Today’ that won the 2015 SAMDPR with a fifteen minute lead also winning 1st Country Challenge and was 7th Overall Grand Average winner and $150,000. 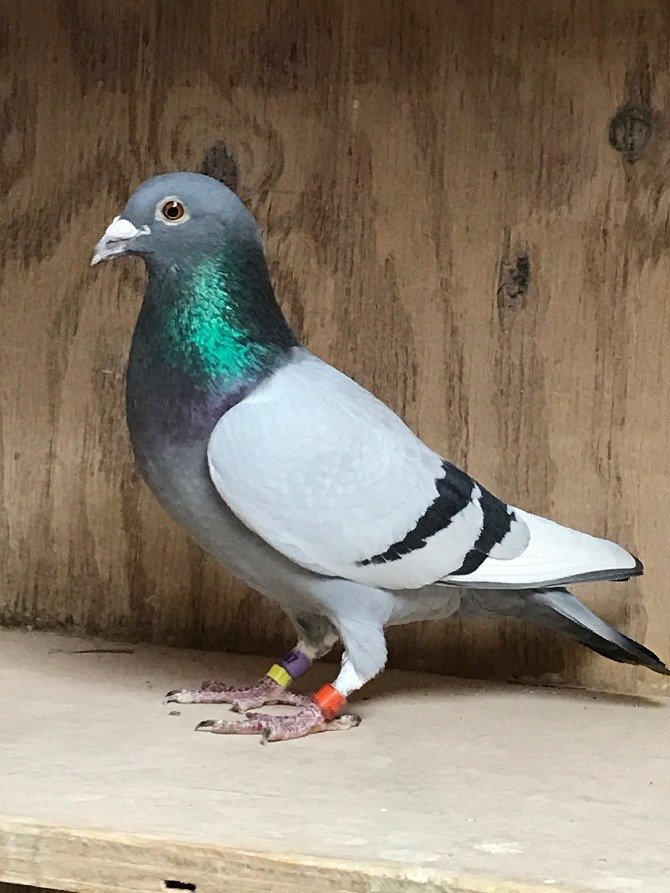 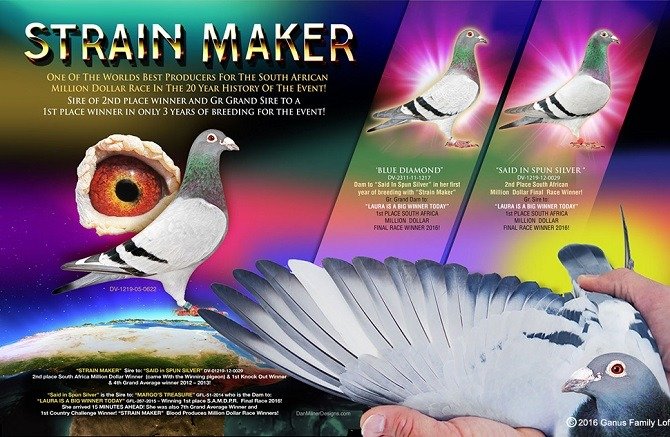 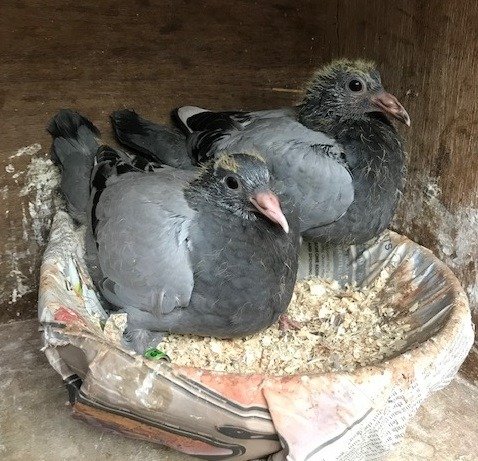 We received ‘Witpen Mike’ from Quarantine in August 2018. He was in great condition so we coupled him directly with ‘Foxy Lady’ to settle him to his box and start his moult. The result is two nice Blue White Flight youngsters hatched in September and making great progress. If they rear and mature well we are considering entering one in our Blackpool Auction in January. We will decide in December when we can evaluate the quality a little better.

The daughter of ‘Abagail’ that we have introduced is GFL2015-22 ‘Blue Azure’ a hen that Mike had originally retained for his own breeding loft. Once again she is really top quality being a nice small to medium sized hen with perfect balance , muscles and feather quality.

She was also selected because of the origin of the father. He is ‘Ornat’ winner of 1st Place Car Average Winner in the SAMDPR in 2012. His offspring has been quite fantastic for Mike and many other fanciers in his short breeding career. In fact he is a full brother to Donnelly and Kirkwood’s  GFL15-15 mentioned above.

Sire of ‘Blue Azure’ is ‘Ornat’ bred by the Champion German fanciers Frank and Horst Sander. His is a direct son of their top breeder ‘Wonder 757’ the best breeding son of their famous base cock ‘Wonder van Haacht’ the son of ‘Kleine Dirk’ that has kept them at the very top of the German Sport for over 15 years. So this bloodline is the same origin as our own great ‘Drum’ and ‘Dutch Master’ and will fit in very well with their offspring in our current breeding loft. 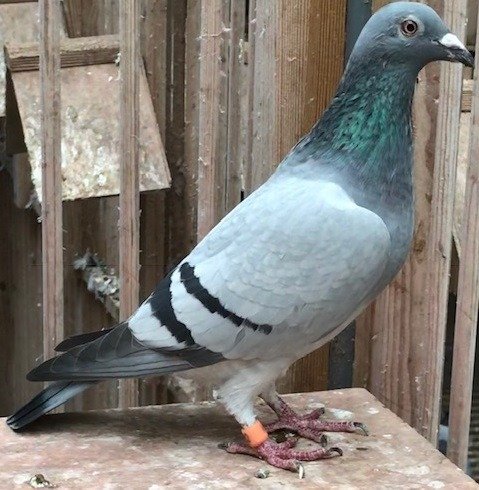 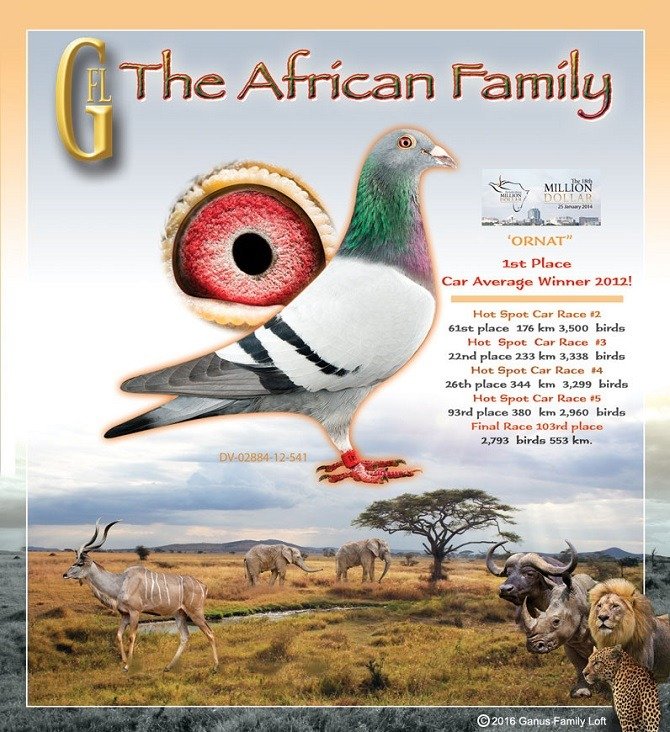 To conclude, this is the way we do it. Fashions in pigeons come and go but we avoid all of that. It is only the most ‘Fickle’ in the sport that needs to change everything to the latest must haves. Surely we can only learn from the greats in our Sport like Tournier, Bostyn, Van Hee, Vandenbeele and the old Masters that patience is required together with stockmanship and a breeding strategy for the ‘Long Game’.

Only good birds from winning origins to enhance our existing winning genes. Or in other words..’The very Best to the Very Best’ and select by performance is the only way to breed even better!

Its the only way.