This pair featured is The Pharaoh and Femke known as an easier to pronounce name of The Portugal Pair.

This pair have been together just four years and their descendants have scored at a quite remarkable volume at the highest level straight away. Children and grandchildren have won well and in this years Algarve Golden Race a great grandchild (Third Generation Winner in Four Years!) scored 63rd in the very tough Algarve Golden Race final against  4565 birds for Bastone and Watts.

The origin of the Portugal Pair has helped their success without any doubt … Pharaoh is a son of Johannesburg probably the best breeding son of our famous Drum and Femke is a daughter of Princess Propere, Rik Hermans current number one breeding hen.

ITS ALL IN THE GENES!

This week saw the two finals in the Algarve take place.

The Algarve Golden Race from Miranda do Douro a distance of 498 km took place on Saturday 2nd October when 4565 birds from an original entry of 6977 birds and the head wind and temperature of around 30 degrees made it a real test.

Our first bird was GB21V38414 Sweet William won 3rd place UK and 50th Final overall. He is bred from a new young pair of Willem de Bruijn breeders and their first raced youngster has given us optimism for the future. 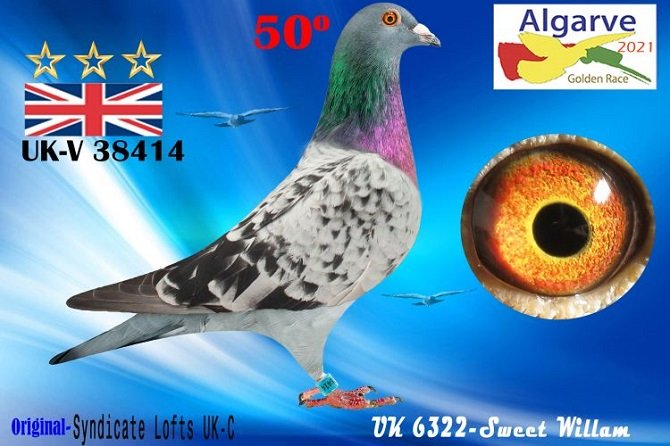 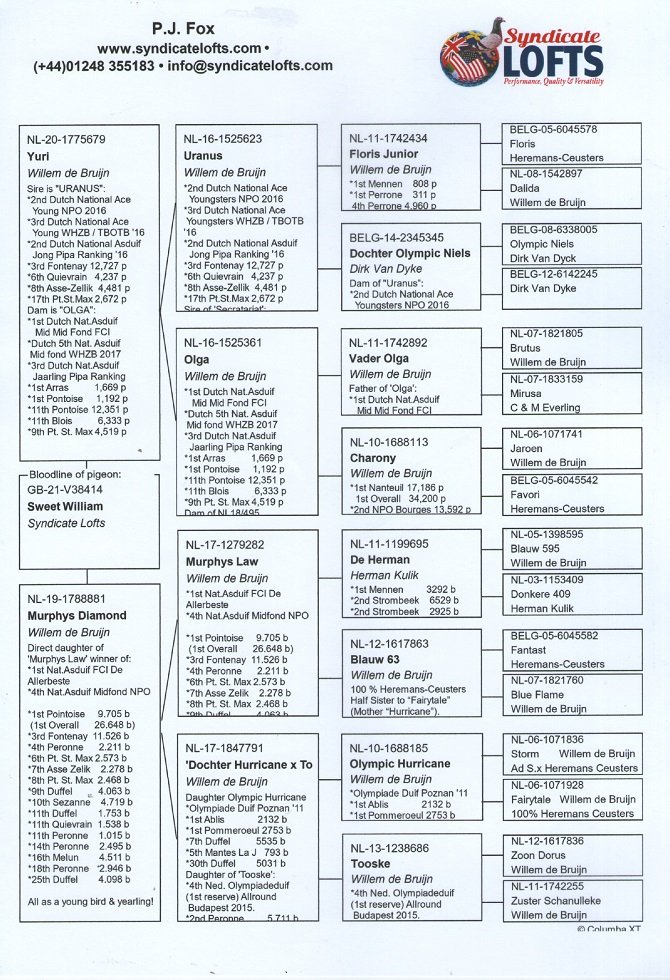 Our second bird was GB21V38410 American Pie winning 6th UK, 97 Prize against 4565 entries and is bred from Blue Star a super breeding son of the incredible Mona Lisa of Ganus Family Lofts. Mother is Noor a yearling daughter of Pharoah x Femke …The Portugal Pair. 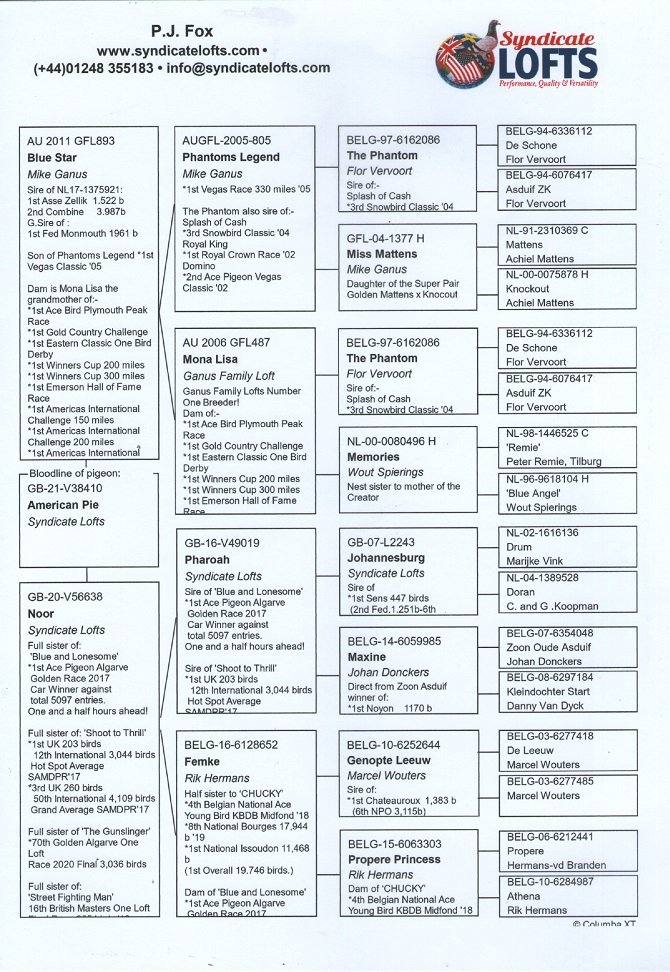 Our third bird just a few seconds behind was GB21V38402 Soul Man winning 8th UK, 104 Prize in the Algarve Golden Race against 4565 birds. This is a son of Blue Cloud a very talented son of the Portugal Pair coupled with  Persia a daughter of Bandit x Rathens Bobbi Mac , Garry Inkley’s NFC Young Bird Winner.

Blue Cloud also bred the winner of 34th Prize Final Race Algarve Golden Race 2019 against 3522 birds and also 18th in the difficult Semi Final of the Algarve Great Derby in 2020 against 2054 birds. 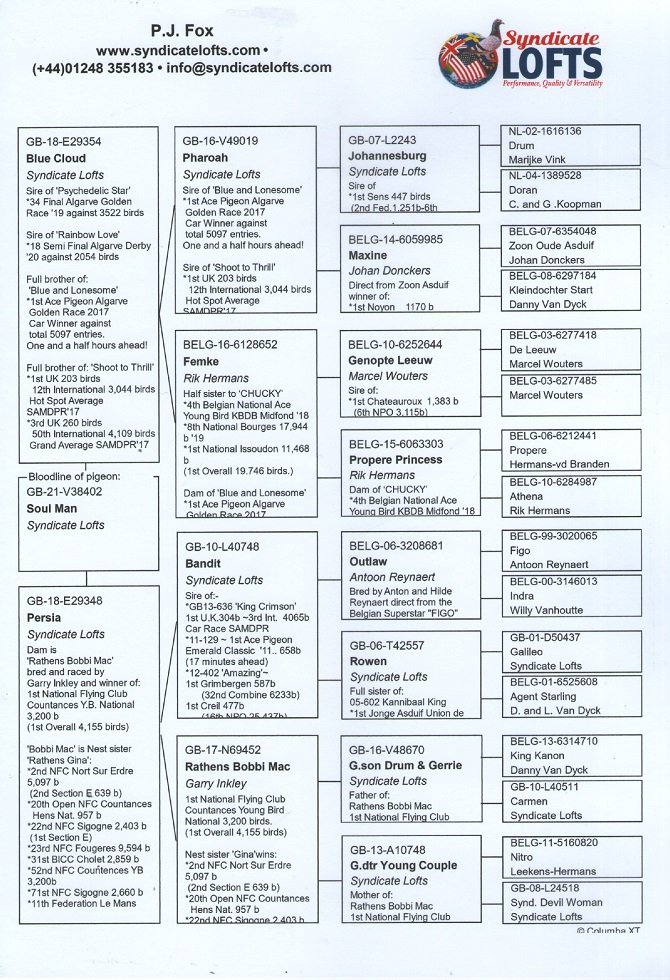 The pervious Day on Friday 1st October the Algarve Great Derby race from Alfandega da Fé a distance of 491 km was flown and from the original entry of 3252 birds a total of 2026 made it to the final and it was a very testing  but fair race. 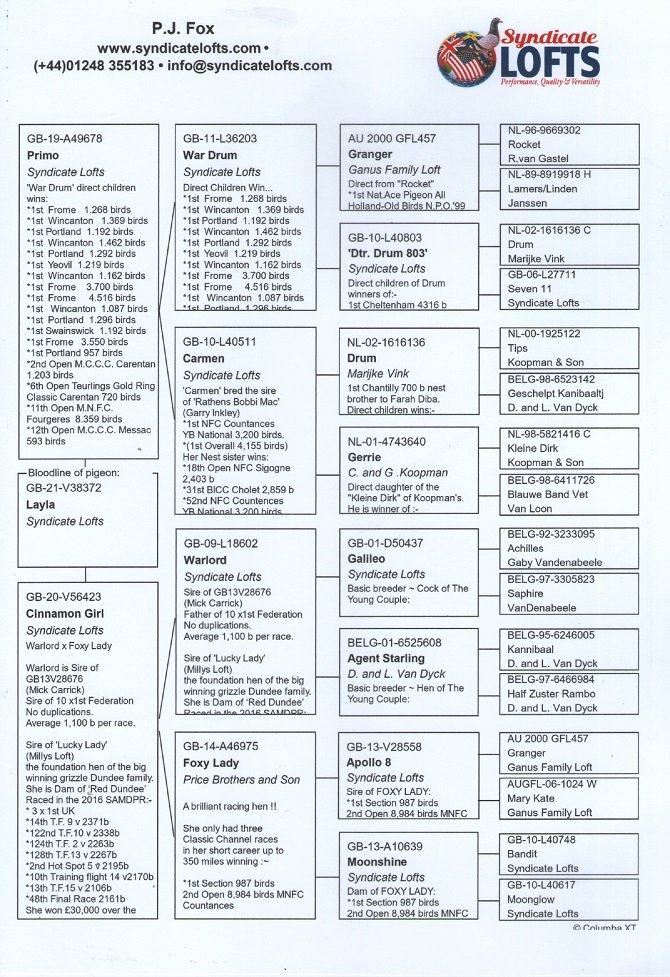 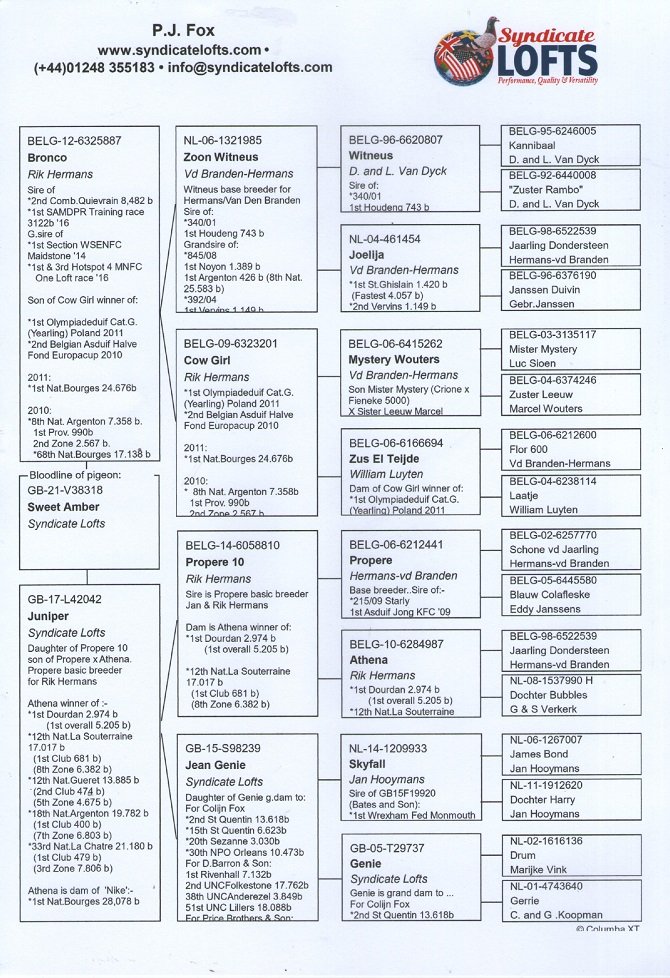 Our third bird was GB21V38300 Whole Lot Of Rosie bred from Pharaoh x Femke The Portugal Pair finishing prize number 212th against 2036 birds. She had previously won 24t prize in Hot Spot 2 against 3253 birds. The nest mate to this hen is GB21V38299 Lady Madonna and she won 4th prize in the Prince of Wales International Semi Final Race from Epsom a few weeks ago against159 birds basketted from 513 original entries. 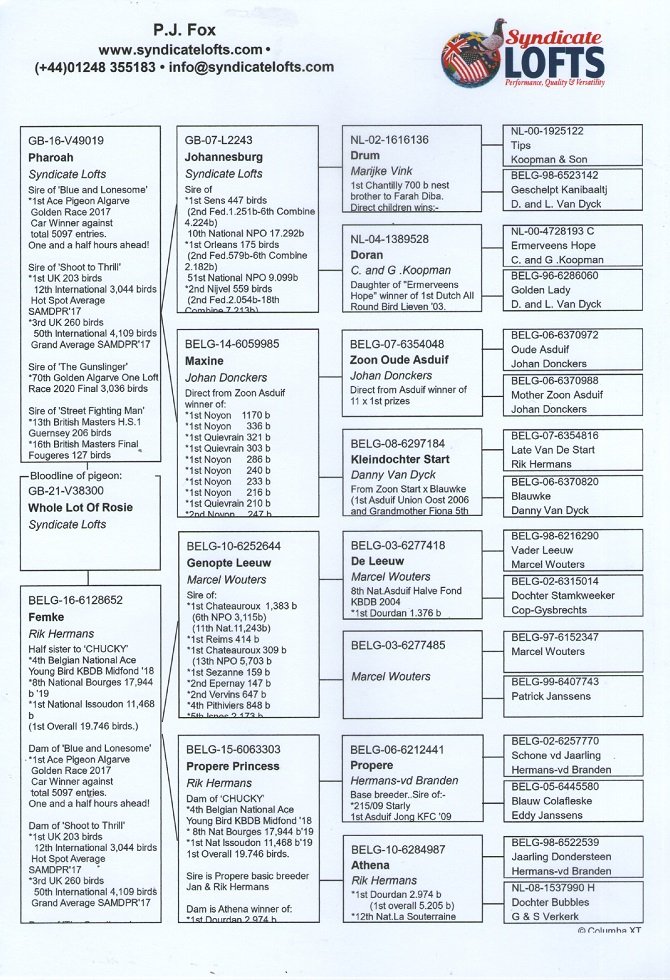