Last Bank Holiday Monday 27th August a number of specialist Breeder Buyers and Gold Ring took place around the country.  We are very pleased to have our bloodlines figure in the very early prizes in a few of them.

Mr Tamman wins the Tailors Arms Breeder Buyer organised by the Netherton Club in Liverpool,from Battle when the remaining 269 birds were entered by 67 members. The winning bird won £5215 in prize money and another £641 in pools and noms. Mr Tamman was both breeder and buyer. The sire of the winner was bred by Steve Guildea ,Liverpool from ‘Peanut’ a direct son of ‘Drum’ and ‘Marita’ coupled with a direct daughter of ‘Dutch Master’. Dam of the winner was of the well respected Mr Kirman bloodlines.

This annual race has got to be one of the biggest in the UK and is very competitive. We are especially pleased with this result for Mr Tamman as it is the third year in a row that our bloodlines have scored well in the race. 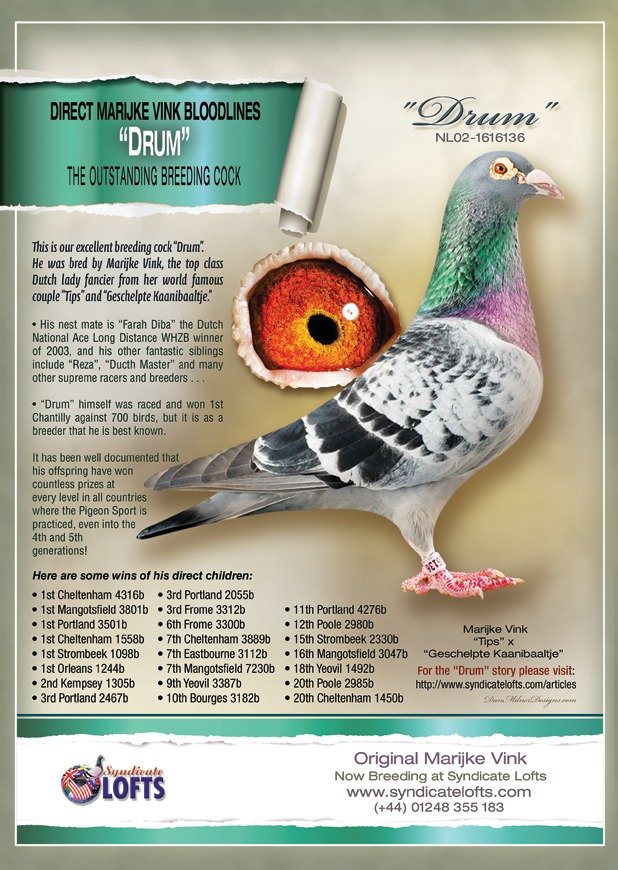 Drum and his nest brother Dutch Master features in the bloodlines of the last two winners of the Tailors Arms Breeder Buyer and the third place winner the year before!

Last year Mr and Mrs Young, Flint was the breeders and Mr Stenson was the buyer to win the first place with both sire and dam coming from our loft. The winner won around £11,000 in total and was bred from a son of Renegade(Outlaw x Lady King) and Mata Hari (Outlaw x Zelda) coupled with a daughter of Two Twenty (Super 8 x Kannibaal Princess) x Rhiannon (dtr of Morris & Bookers Pink Eyes X Full Set)

The year before Davies and Millington of Flint was the breeders and  J & L Maguire Liverpool the buyers to win the 3rd prize and £2000. The young bird was bred from Son of Two Twenty (Super 8 x Kannibaal Princess) x Rhiannon (dtr of Morris & Bookers Pink Eyes X Full Set) paired on to a dtr of Son Mercury from Drum x Cleopatra) X Dtr (Bandit X Moonglow)

On the same Bank Holiday Monday it was the Heart of England Federations Gold Ring Race from Purbeck and Steve Price of Price Brothers and Son of Stourport reports winning the race with a young blue white flighted cock that also wins 3rd Federation and he was also 11th Fed the previous week. This young cock also wins the Stourport and District Club Gold Ring Race that was also held in conjunction with the Heart of England Race.

As for his breeding he really is bred in the ‘Purple’. His sire is a direct son of ‘War Drum’ that had many prizes racing before retiring to the stock loft including winning 1st Worcester Fed Frome as a young bird against 3,551 birds. Dam of the Gold Ring winner is a young hen bred from Rebel (Drum x Gerrie) and Halo (Dutch Master x Gerrie). 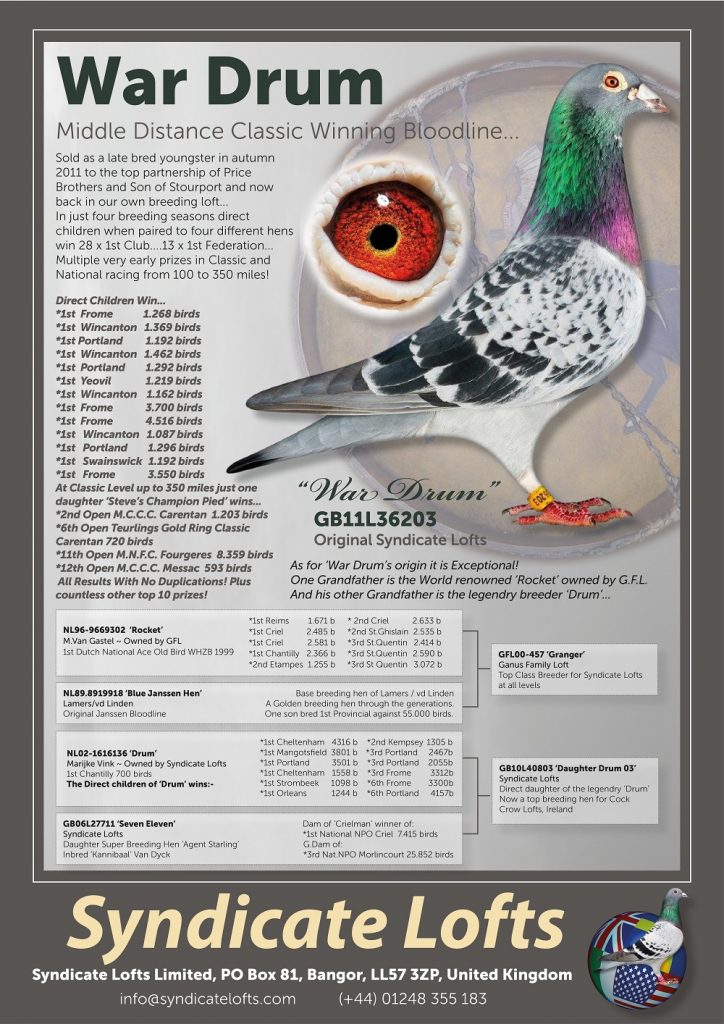 War Drum our top breeding cock and direct sire of 15 x 1st Federation winners. His winning grandchildren are countless however two of them won the Heart of England Gold Ring Race and the Stourport Gold Ring Race for Price Price Brothers and Son plus 1st Hill Ridware Breeder Buyer on the same day for R&G Jones and Batt.

Steve also reports breeding a youngster for his friend Chris Batt who entered the bird in the Hill Ridware Breeder Buyer and bought the bird back. The final of the Hill Ridware took place from Poole on Bank Holiday Monday resulting in R & G Jones and C Batt winning 1st place with the bird. Again the breeding is top draw being bred by Steve from another direct son of ‘War Drum’ paired to a hen he bred from a pair he obtained from us. Sire being from ‘Blue Mike’ (Son Mona Lisa of Mike Ganus) x ‘Rocket Class’ (Daughter of Granger x Mary Kate) coupled with a hen from ‘Chico (Hannibal x Genie) x Daughter Minerva (Direct from Brother Propere Rik x Minerva of Rik Hermans).

On the same Bank Holiday Monday but a few thousand miles away! We was very pleased to score the 29th Open Position in the 84 KM Hoosier Classic One Loft Training race against 2,609 birds entered by 706 lofts. Our early bird was bred from one of our new young top breeding pairs ‘Pharoah’ x ‘Femke’. This couple last year in their first breeding season bred ‘Blue and Lonesome’ winning the 1st Ace Pigeon by two and a half hours and a new car in the Algarve Golden Race and they also bred  ‘Shoot To Thrill’ our winner of 1st Ace Pigeon UK South Africa Million Dollar Race and 12th International from over 6,000 entries.

‘Johannesburg’ yet another top breeding son of Drum!