Living in the South Holland Rijnsaterwoude father and son Yong and Jiabin Lin, together they have been enjoying the pigeon sport since 2013 on a beautifully situated farm where it still really possible to enjoy the beautiful nature and the peace that this brings.

It has been part of the municipality for a number of years Kaag en Braassem located between the Kager lakes and the Braassemermeer. This beautiful area of ​​the Netherlands is known for its greenhouse horticulture and is a popular environment to live in view of the amount of waterways and water dykes.

The Dutch have lived here for centuries with perhaps André van Duin being the best known. The main characters of this report however did not so much live here because of the beautiful nature, but in particular because they found an ideal place to live and race the pigeons.

Yong Lin was born in China and has lived in the Netherlands since 1983. Behind their property they had an aviary to breed consumer pigeons, and this is how they came into contact with the pigeon sport.

They discovered there were more possibilities with pigeons then just to eat them, and they decided to

Participate in the race competitions so Jiabin got the task to find a club locally. They were total novices in the sport and they started racing the pigeons in 2005. In the beginning with some old warriors without performance and it soon became apparent that was not their goal.

On the advice of fellow club members, they contacted Gerard and Bas Verkerk. Gerard and

Bas thought they were from China, but when it was clear that they were in the Netherlands with the pigeons, the ice was broken. In the beginning, however, it was not yet possible to buy pigeons besides the fact that the price was higher than the gentlemen had expected, they got first received the good advice from Bas to be sure that they really liked the pigeon sport.

During that visit, Yong saw some Chinese pigeon magazines and discovered that there is was also a lively trade in pigeons. From that moment on he was not only a pigeon fancier but also a pigeon broker.

Together with his son he went to many top lofts to buy pigeons. Not only at Verkerk’s, but also for example, Jan Ouwerkerk and Piet van de  Merwe, and if we consider the current stock pigeons, we can say that the pigeons from Verkerk and Jan Ouwerkerk are supplemented with some very good ones from Pieter Veenstra and it is these that form the current basis of the top pigeons.

As mentioned, Yong came through his work as a pigeon broker into contact with all of the top fanciers in the Netherlands and Belgium.

Besides his search for good pigeons for his own loft and trade, he asked those enthusiasts advise about their way of management and conditioning. According to Jiabin, his father learned the most from Piet van de Merwe and they also have learned a lot from Chris Hebberecht and the Brothers Fanger from Badhoevedorp, from whom they buy their feeds.They have received a lot of really good advise there, especially in the field of feeding and nutrition.

They did not have to wait very long for the good performances to arrive and in 2009, 2010 and 2011 they already had pigeons among the National Ace Pigeon Champions.

One of the top years was 2013 in which they became best fancier in the Netherlands and had the two Best cocks from the Netherlands with “Great Wall No 1” and “Rage Against Time”.

The year 2013 was also the year of their move to the new loft location. Because they wanted bigger and better and their home was going to be demolished in the neighborhood where they lived, so they decided to look for one in a nice quiet spot.

You can safely say that if you breed a National Ace pigeon or Olympiad pigeon for three generations in a row you have a Golden Line.. 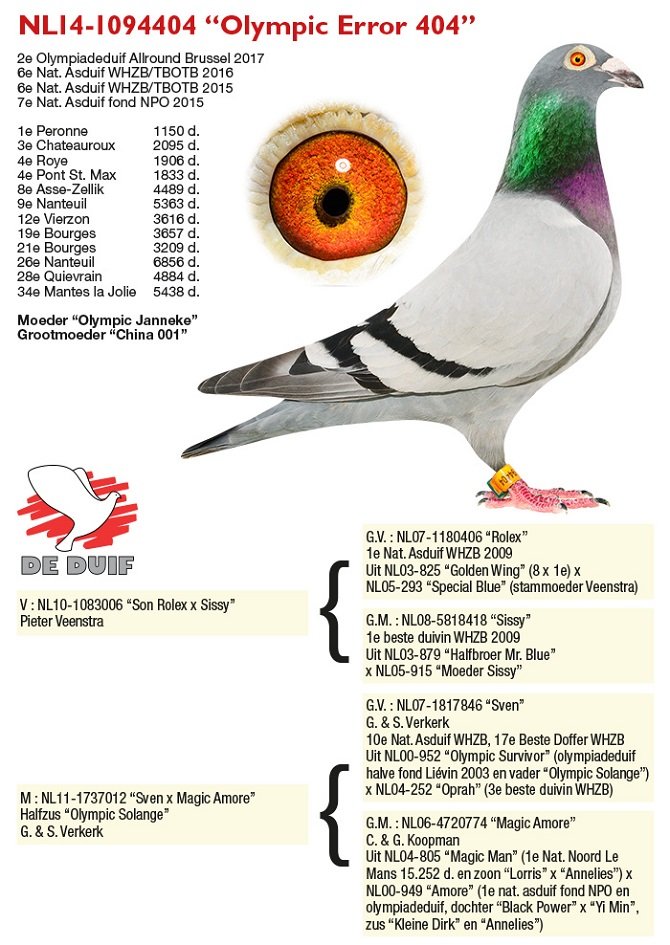 It all started with Olympic Error 404.

It is striking to see that Sven is a son is from Olympic Survivor and that these cocks together with Magic Amore are the parents of Olympic Solange. Undoubtedly the very best pigeon that Verkerk ever had in their loft based on racing and breeding performances.

This powerful blue hen was 1st International Olympiad Ace Pigeon yearlings in Poznan. The results she achieved as a yearling is quite unbelievable with 9 x among the first 10 in a district against thousands of pigeons and three times winning the first prize against 3,270 birds, 2,346 birds and 1,190 birds.

Her sire The Golden Dragon is the absolute basic stock sire in the Lin loft and is bred out of a son of Kleine Figo of Kees Bosua who was then paired to a daughter of the Olympiade 003 x daughter super484 out of De 484 of Jan Ouwerkerk with a daughter Bulldozer of Verkerk.

This 484 along with his brother the 483 and the 69 ensured that Jan Ouwerkerk became the national champion one day long distance of the Netherlands. 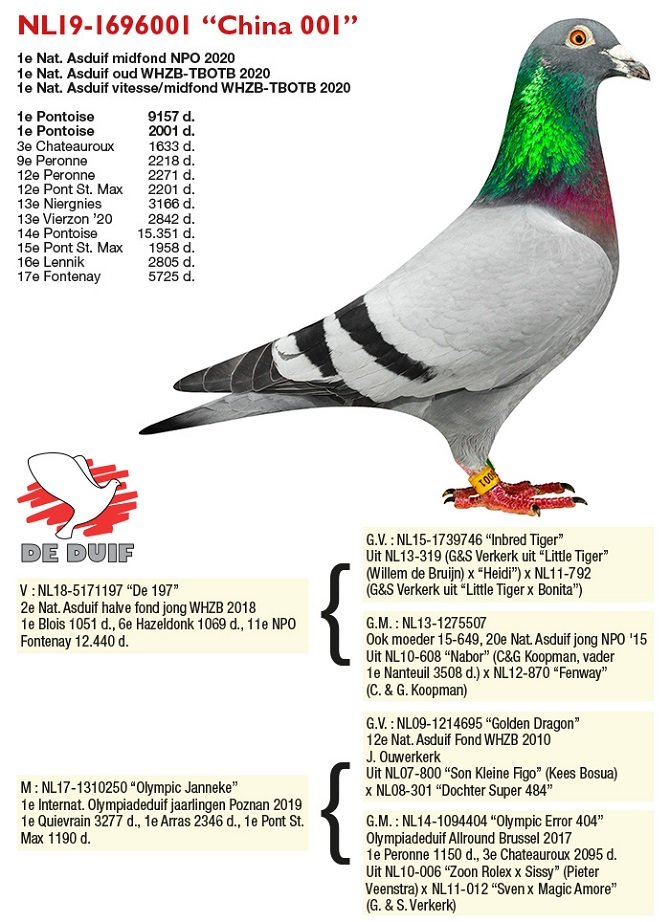 So once again here another composition of the very best genes that was flying around the Netherlands at the time , and the next great thing is this Olympic Janneke is again the mother of the cock China 001,19-1696001, which in 2020 has been crowned 1st National Ace of the Netherlands WHZB Vitesse /Middle Distance and as 1st National Ace Allround. Results unknown for a yearling.Of course he also only managed to win top prizes with a 1st Pontoise against 9157 pigeons as a highlight.

His mother is of course well known, but so is his father and he is certainly a top pigeon. The 18-5171197, was himself in 2018 2nd National Ace Youngsters Middle Distance WHZB. He comes from Inbred Tiger of Verkerk from Inbred Little Tiger from Willem de Bruijn, x the 13-507 which is a direct Koopman from Nabor x Fenway. This Koopman cock is another inbred to Magic Man 3rd National Le Mans 2005, “t Kerkduifje and Muggie from Kees Bosua.

It is absolutely not guaranteed that you will breed top pigeons from top pigeons, but it turns out that the chance of this is much greater. According to Jiabin, the top pigeons are best to be as close as possible in the pedigree and it is important that both the father and the mother have several top pigeons also present in the pedigree . At least that’s the strategy here.

Division of roles and racing system

At the moment, the pigeons are raced from the lofts built into the roof of the farm. Five sections for the old pigeons of which three are for the cocks and two for the hens. This is father Yong’s domain. He is assisted by his daughter-in-law who has also been there for a few years and independently races with the youngsters from the lofts of Yong and Jaibin.

They have 72 boxes for the cocks that are opposite each other, because the entrance to the loft is at the back. The hens sit on ‘V’ Perches in the other lofts. They are therefore raced on double widowhood, although the performances of the hens in the last few years has been better than those of the cocks. Father and Son Lin have been looking for the cause for years for this, but it cannot be found. It is not down to their feeding system according to Jiabin, because both the cocks and hens are fed the same way. They mix three mixtures of racing mixture to each other. Beyers, Versele Laga and Mariman. This is supplemented with a high-fat feed and purification. When they return home they get plenty of racing mixture and a rich in fat feed for recovery. They also often mix in a protein product over the feed.

At the start of the week and the days afterwards purification is added that becomes less and less as the week progresses and that is  then supplemented with rich fat feed. For the middle distance and one day long distance flights they also add Tovo, P40, candy seeds and peanuts are on the menu.

They are very satisfied with Dr. Brockamp’s products. And consider them very important. For example, they use the Probac 1000 and the Oregano Oil every week.

The use of medicines is certainly not shunned. Every three weeks they get something for Tricho or for the respiratory tract. They use products for this from De Weerd and Van der Sluis. Certainly for an important one day long distance race a treatment to clear the head is given.

In addition to good care, there is also a lot of attention paid to the exercise. Every day they have to exercise hard for an hour and a quarter to an hour and a half. This is usually in the morning.

For a part of the season this will be sometimes paused as sometimes they no longer need this because they race every week from the very first flight.

Because the emphasis here is on the one day long distance flights the old pigeons are also darkened. The front of the loft consists almost entirely of glass. 1 / 6th Part is open and is covered with windbreak mesh for ventilation. For the rest everything in the loft is closed. As if it were a one box construction. In the summer it can be nice to be warm in the lofts, but the pigeons must feel comfortable with it. 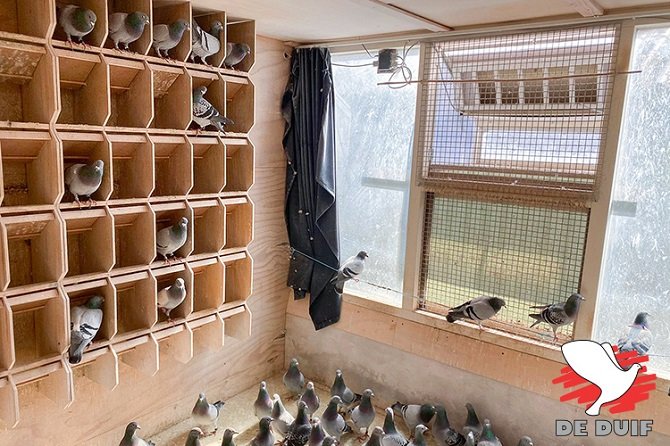 The youngsters are cared for by Jiabin.

The performance here is also very good. They are raced with each other in order to be separated after a flight or two. Unlike his dad, Jiabin feels most comfortable with Matador food. This consists of a starter mixture, racing food and high-fat. With this he can race wonderfully well and he knows how to get his young team under perfect control. If he was to take care of the old ones, he would certainly switch to this system there too.

Back to the top quickly

As previously written, Lin Family moved in 2014. After first breeding a lot from their very best pigeons in order to be able to continue with the youngsters, they then sold the old ones completely. They bought back a few pigeons, such as Golden Dragon, but they mainly continued with the youngsters. You can safely say that they succeeded in this. In the past they regularly bought pigeons, now their strategy is more focused on maintaining their own Golden line and very occasionally buying something from the very best.

At the base the good pigeons from Gerard and Bas Verkerk and Jan Ouwerkerk crossed with a few good pigeons from Pieter Veenstra. A pigeon from Willem de Bruijn from the Hurricane also seems to be an excellent addition. The first two young hens from this bloodline have already raced well and appeared on the teletext result last year.

Both gentlemen are obsessed with pigeons, it is their passion but also their profession. According to Jiabin, his father Yong has it under control. He sees everything, is very serious and nothing is too much for him. His total focus is on the pigeons.

This also applies to Jiabin who is slightly more structured than father. Everything has to be in time and on time, otherwise he can lose sleep over it.

Their philosophy is that pigeons should really enjoy themselves in the loft, so that they can be well prepared for the flights. Good pigeons that are optimally healthy in a good loft and then an extra contribution from the fancier leads to top performances is the motto here.

Their goal for the coming years is to breed new national ace pigeons and to achieve NPO victories. The quality in the loft and the enthusiasm of the fanciers will certainly not be the problem.