Melden is a village in the southwest of East Flanders and part of the city of Oudenaarde. The village is best known for the Koppenberg. When you talk about the long distance, Melden is mentioned in the same breath with the name Joost De Smeyter or the partnership De Smeyter-Restiaen. Last weekend a pigeon of theis partnership won the 1st National Saint-Vincent at 21.56.48 h (17/07) for a distance of 876.266 km and at 999.39 m against 3,080 pigeons.

It was the first of the six Belgian pigeons to reach their loft before the day closed on Saturday.  Sunday morning at 6:09 Joost clocked his second pigeon, that won the 13th national, and it continued with the 35th and 45th national etc. In short, a great result for the grandmasters from Melden.

Joost De Smeyter was a sports and practice teacher at the Ronse cycling school for 13 years. As students he had Thomas De Gendt and Xander Meurisse, among others. After that he was an employee of the Willy Naessens Group for another seven years. Joost is 46 years old and is currently a professional pigeon fancier. In terms of the number of international victories, he already has a lot of experience.

Joost built his colony with pigeons of his own origin. One of the important pillars is the “Joost” (1st Internat. Perpignan 2003) and further the “Grand Cru” (1st Internat. Bordeaux 2006) and two toppers “Gitan” and “Narbonne”.

Joost had 47 widowers in the basket for St. Vincent who are raced on classical widowhood. More than half will win national prizes. It is the 2nd nominated that takes the national victory.

Cocks and hens stayed together until March 1, then are split and then widowhood begins. The widowers exercise twice a day for 1 hour. Joost started the season with a team of 60 widowers on the classic widowhood, 50 hens on the nest game and 110 yearlings. 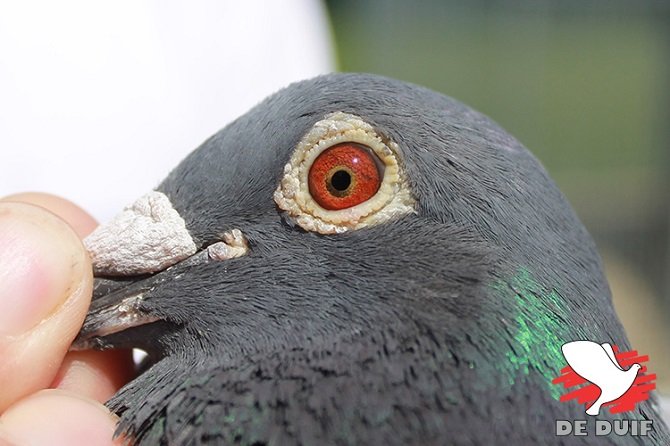 The national winner is “Tadej” B18-4051930. He is a blue cock that’s currently on its second flight feather. He is a well-built of the narrow and long type. He is an alert pigeon that fights for its territory. Like a spear, he came at the sputnik and squeezed out another sprint in the last few meters. He didn’t lose a second when he got home. 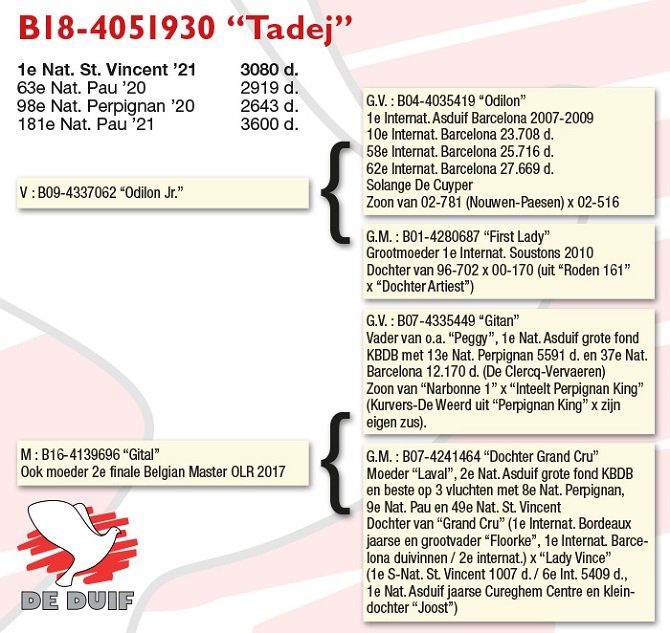 As a preparation he raced 2 x Chateauroux and Pau before he went into the basket for Saint-Vincent. Cocks and hens never run together when basketing for a race. When they return from after a tough flight, the period they are together can last until the next morning. 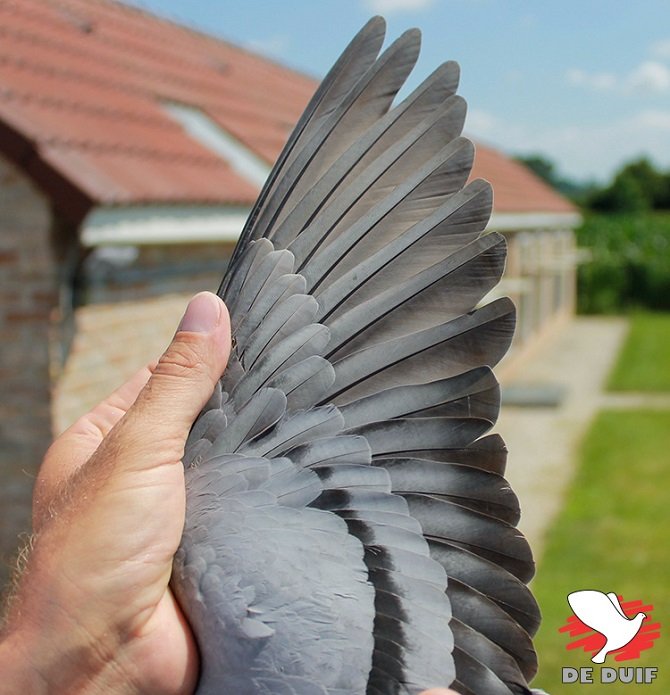 Joost De Smeyter puts his trust in the feed mixes of Versele-Laga. When a racer returns home, a protein-rich mixture (Start I.C.) is fed. After that, a lighter mix (Gerry Plus Black Label) is used. The last five days they are then fed with a sports mixture (Champion Black Label I.C.).

The medical care is in the hands of Pascal Lanneau. During the season, 1 or 2 treatments were made against trichomonas and 1x against respiratory infections. Vitamins are given regularly and Belgavet products are also provided. Eye drops are given very little.  It also happens that the pigeons are sometimes taken away up to 50 km in between races.

Strong work of the partnership De Smeyter-Restiaen there in the southwest of East Flanders!