Once again it was nice to hear from Dave Evans of the Evans and Jackson partnership who fly in the Ollerton South Road in the Notts S.R. Fed.

We are always looking for compatible birds, selecting for physical qualities and winning genes to cross into our existing established lines to retain or if its possible enhance the vigour and success rate of the new generations. As most fanciers know, that’s not so easy and sometimes it works and mostly it doesn’t.

Our Drum and original Koopman / Dirk van Dyck lines are such birds that we are always looking to try to keep moving up and we are very lucky that they are easier than most to cross. Full credit to Gerard Koopman and in particular the late Dirk van Dyck for producing such world class winning DNA.

Willem de Bruijn has been at the very top of the sport for very many years and he was super impressive when I first visited over twenty five years ago. This last ten years or more his birds have gone into ‘Winning Overdrive’ not only for himself but a a huge amount of other top fanciers especially in the Netherlands and Belgium who are usually hard to please.

Willem has selected very hard on results only for years and brings in new birds most years and starts the process again. The result is the very best are incorporated into the breeding and racing plans and the good are sold and the bad are eliminated. As per the philosophy of his bosom friend and travelling companion Ad Schaerlaeckens.

This last three or four years I have added some carefully chosen individuals based on body type and especially origin of bloodline that I hoped would be suitable for our Drum and Kannibaal lines. Aiming mainly at the five to nine hour classic race and one loft distances of 200 to 450 miles.

I have visited Willems auctions and purchased a few and he was also very generous to select a few for me himself. The lines that we have settled on are without doubt Murphy’s Law who we think is outstanding in every way, Uranus who won second Dutch National Ace and is proving a world class breeder having bred a first Dutch National Ace  and Willems lines that descend from his original Heremans Ceusters Rossi and Spinneke origin like Hurricane and Spidey of Luc and Hilde Sioen. 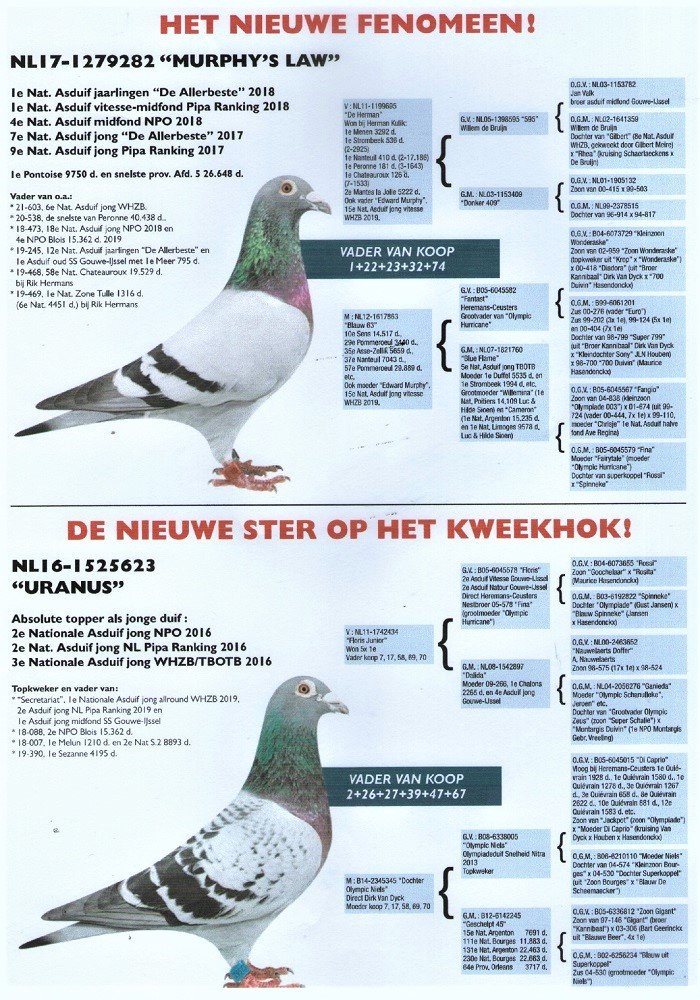 The first daughter of Murphy’s Law that we purchased was at his Dutch auction organized by De Duif in Limburg on Boxing day 2019 when we secured NL19-1788881 that we named ‘Murphy’s Diamond’. She is a small , round muscular bodied hen with perfect feather and just what we were looking for to keep the size down in the Drum and Kannibaal birds.

First nest in 2020 when paired to a son of Young Couple she bred NL20-1581144 who won  3rd Club Niergnies 463 birds, 27th Comb. Niergnies against 3914 birds after having won the club pre season race from Duffel against 760 birds before we lost her from a 20 km training toss! Her sister was our first bird from Bierges however had a broken chip ring in a race when we won 1st club 533 birds, 4th Combine 3557 birds with our second bird. Disappointing but that’s life.

Then we coupled her to ‘Drum Star’ the last son of our famous old hen ‘Genie’ probably the best breeding hen we ever bred off Drum. Drum Star had bred some top winners in the first and second generation straight away and Steve Price had his full brother ‘Major Drum’ that is a sensational breeder for him , so we had confidence that he would be a suitable mate to try with ‘Murphy’s Diamond’.

We sent one youngster ‘Saving Grace’ to the Algarve Golden Race and was very pleased with her scoring early along the way and from the final race from Braganca 496 km against 3036 birds entered from an original entry of 5412 birds she was our third bird scoring 170th International in a race that was probably to quick for her. Never the less a very pleasing performance.

The final of the Algarve Golden Race in 2021 was flown from Miranda do Douro a distance of 498 km and took place on Saturday 2nd October when 4565 birds from an original entry of 6977 birds started and the head wind and temperature of around 30 degrees made it a real test.  Our first bird was GB21V38414 ‘Sweet William’ and he won 3rd place UK and 50th Final overall winning €2000 and sold for €2000 in the auction the nest morning. He was bred from  YURI a son of Uranus of Willem de Bruijn when he was coupled to Murphy’s Diamond. So another very pleasing performance.

The nest mate of ‘Saving Grace’ was a cock sold to Dave Evans of Clipstone in 2020 and he bred four youngsters from him when paired to a daughter of our Excalibur from Mario x Simply Perfect , Kannibaal , Di Caprio and Drum with Miss Amigo a daughter of Peter van der Merwe’s Amigo therefore Kleine Dirk we bred together with our Genie hen the super breeding daughter of Drum.  So Dave Evans bred as we had intended in the beginning …plenty of Drum crossed with Murphy’s Law.

From the four they bred late in 2020, they lost one and raced the other three as yearlings. One wins a club, 2nd,3rd, 5th etc and two weeks ago they had a tricky race when two hen nest mates dropped together from Newbury to win 1st and 2nd from 300 entries when in a strong west wind they shouldn’t have featured and the next week in another tricky contest they won 1st and 2nd again from approx 500 entries with the same two nest mate hens.

Considering Murphy’s Diamond is a very young breeder and only a handful of her children have been raced by us or others , the future looks promising.