*This super quality hen is ‘Rhiannon’ a direct daughter of Morris and Bookers famous pair ‘Full Set’ and Pink Eyes’ bred from the very best of our bloodlines via Jack Walker of Cannock.

Garry Inkley had another one of them weekends last week scoring early (Should be in the top 60) in the NFC Sigourne with the nest sister of his 1st NFC Young Bird National Winner 2017. This hen also scored  52nd Open in the same Young Bird National so without doubt a star of the future! They are bred from a son of  ‘Son Kanon’ (Son of Kanon of Danny Van Dyke) and ‘Carmen’ (Daughter Drum and Gerrie) and the mother of them is a daughter of ‘Nitro’ (Brother Blue Viagra Dirk Leekens) with Syndicate Devil Woman (Daughter of Young Couple and 2nd UK Ace Pigeon South Africa Million Dollar Race 2009).

First through the trap for 1st Fed was a beautiful young hen direct from ‘Junior’ the last son of ‘The Young Couple’ paired to ‘Rhiannon’ bred by Morris and Booker from their famous ‘Full Set’ and ‘Pink Eyes”. 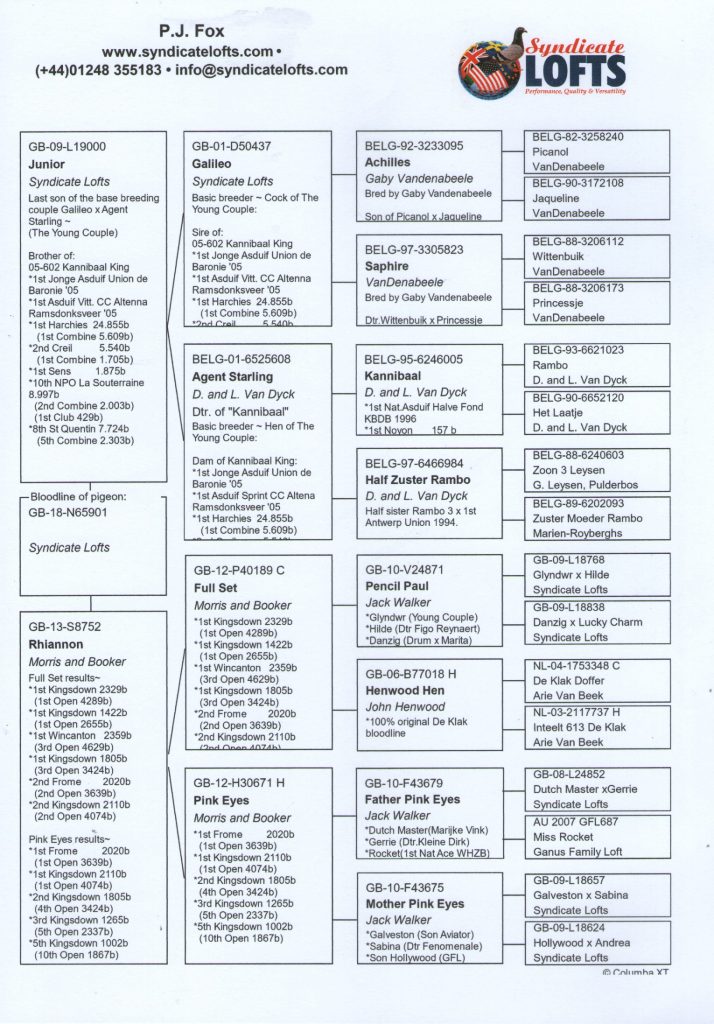 Interestingly another daughter of ‘Two Twenty’ and ‘Rhiannon’ bred the winner of 3rd Tailors Arms Breeder Buyer the year before 2016! bred by Davies and Millington of Bagillt and raced by J and L McGuire of Liverpool winning £2000 from Bedhampton after a four day holdover at Carentan.