The following race he won 1st NPO in Afdeling 10 with his 2 year old hen named “Sifan”, she is also the fastest pigeon of the liberation between Afdeling 10 & 11. 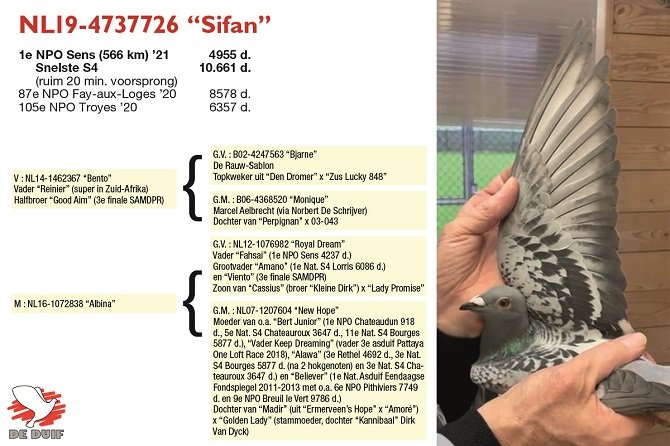 According to Gerard, “Seldom have I seen a pigeon with such a rapid arrival on the landing board”.

But that wonderful moment quickly turned to concern of the other hens in the race because after exactly an hour only 15 of the 166 racers entered were home.

They had a tough flight and at this moment (24-hours after the first pigeon) there are still only 92 hens back and the five first nominated hens are still on their way.  We have to move on, but it’s a big downer for everyone with so many empty perches in the lofts.

It is lucky we don’t run into these kinds of flights very often. “Etampes in 1994 was also one” remembered Gerard, then still living in Nieuwe Amsterdam. We won the first prize with a whopping 22 minute lead (with “Sultan”) but the loft was still half empty days later.

The north of the Netherlands had to wait a long time on Sunday before the pigeons were liberated at 10:30am. The delay was because of clouds and mist over the eastern part of France, Belgium and the Netherlands. We know that dozens of pigeons continued to fly round after the liberation.

Also the sprint race for Afdeling 10 & 11 was the same, liberated at a quarter to two at Sittard and we had a downright bad race with the prize list open for several hours locally.

The pigeons in Emerveen were given their freedom to exercise during the winter when the weather was good and there was available time and if we felt there were not as many birds of prey flying around.

From the end of February they were released most days to exercise for the first races. We took part in all races from the start of the season starting 13th April.

Against his usual custom, Gerard did not let the pigeons fly a 300 km training race before the first one-day Long Distance race during the week. The spring weather didn’t lend itself to it, but we exercised them a lot at home and when put to the test they were there straight away.

The winner ‘Sifan’ completed the youngsters program without a problem. As a yearling she won a nice prize at Orleans and thus, in combination with her decent pedigree, passed the selection and was rtetained to race this season. She repays that now with a 1st NPO and fastest from Sector 4.

The pigeons from Ermerveen have the power to fly for a long time on the wing, and that apparently helps a lot on these flights.