Ter Apel – winning 1st and 2nd with your first and second nominated entries and placing three in the top ten from only seven entries in a sector flight, that’s what the brothers from Ter Apel achieved from Lorris on Saturday. “It feels great,” says David, “but it’s still a little bit diminished because the wounds from Sens a fortnight ago still have not healed. We took a big hit in this region and still after two weeks, half the pigeons are gone”.

The brothers found it difficult to get motivated again not least because of the overall course of events concerning the liberation in Sens. Over the last 14 days they’ve looked at  the small teams of pigeons – about ten cocks and 10 hens with quite a sad face. The week after Sens they didn’t even race at all, they were so disappointed.  But as befits real sportsmen, they’ve rallied themselves again and they got that little team back on track, coming home 1st and 2nd from Lorris. All the energy they had, they put into it.  Real professionals, with great pigeons. 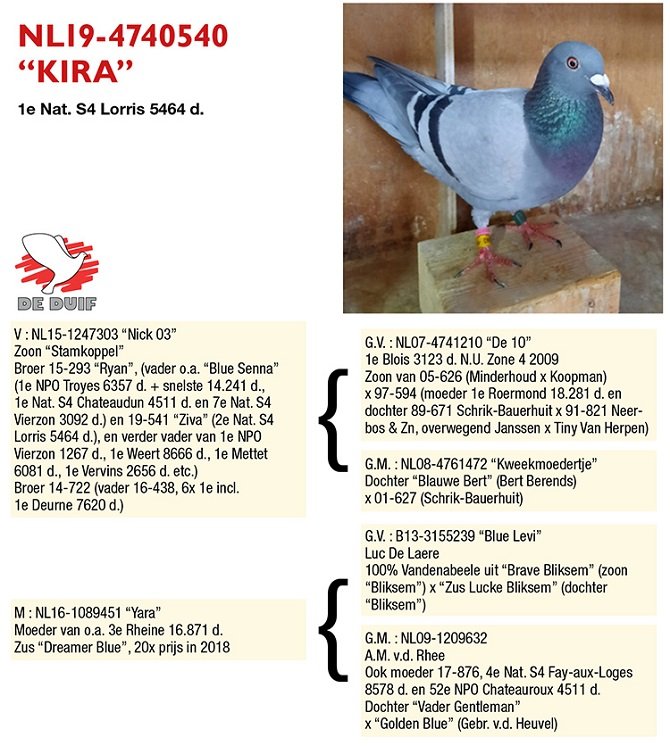 They win 1st and 2nd with two hens, Auntie and Niece. Actually it all works back to the stock pigeons that built the loft. The basis was formed by the Janssen pigeons of Boy Peters, Venlo who for many years had a close contact with the brothers in Arendonk and bought countless pigeons with which other fanciers succeeded very well. The Brothers Schrik had great success with Boy Peters’ pigeons. Pigeons also came to strengthen the ranks from Bert Berends, Nieuw Weerdinge, N. Bauerhuit, F. Meyer, H.P. van Wijngaarden, Luc De Laere and Adrie van de Rhee. Over the years, they have always sourced pigeons when they thought they would improve the performances and rankings.

The result is a loft of pigeons that can handle the One-Day Long Distance and these are also the races that always receive the most attention.

The following week from the middle distance with 6,9,10,11 against 722 pigeons and won 35 prizes from 39 entries from Chimay (365 km). That promised something good for the rest of the season and expectations from Sens were high however it ended with the result as described earlier. Still, the pigeons carried the form they had through to Lorris and achieved a result that you only can dream of.

Some say this is the best result they have seen for the last 20 years with such a small team from the One-Day Long Distance.

They themselves are also really proud of the result and that seems to me to be only right.