‘The Duif Chronicles Online’ at Syndicatelofts.com 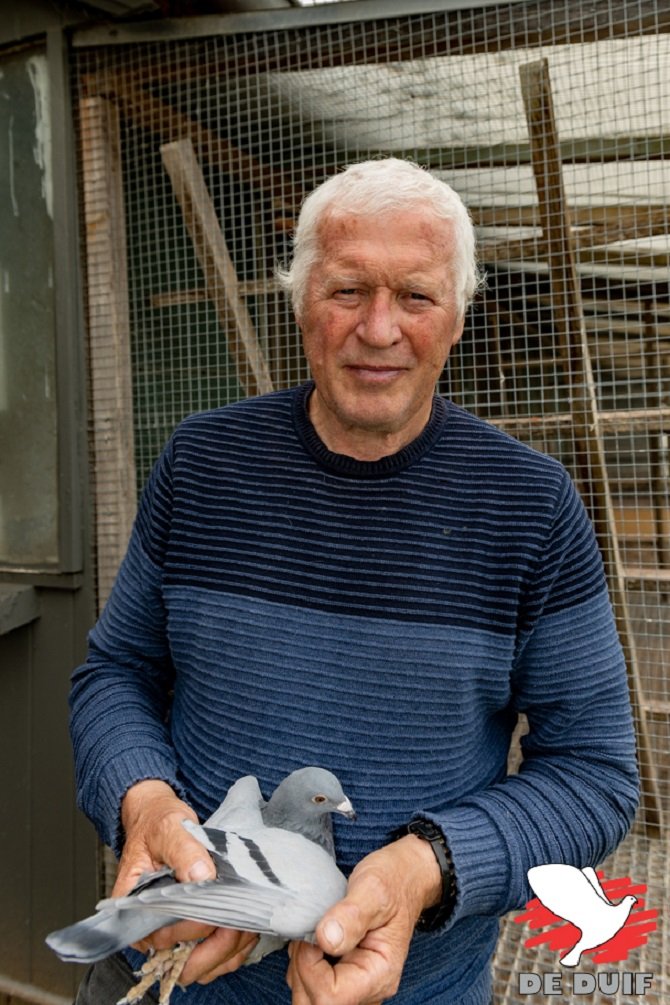 Tielt-Winge – Tielt-Winge is a municipality in the Belgian province of Flemish Brabant and in the heart of the Hageland. We set course for the home of Willy Vos (74) who has had one of the best days of his career.

Willy worked in the bakery for 30 years and then he was employed in the building industry. He started in the pigeon sport back in 1986. The daily care of the pigeons are done together with his brother Boudewijn Vos. Highlights in his career are the provincial victories from Chateauroux and Vierzon.

The basis of the colony is formed with pigeons from Jespers-Vanderwegen, Holsbeek and Ariën-De Keyser, Houwaart.

Willy Vos is very good friends with Pascal Ariën,  and his best pigeons come from Ariën-De Keyser. Willy gave Pascal a couple of youngsters and one of them won the 2nd National Chateauroux.

Willy had 4 yearlings and 2 old birds in the basket for Vierzon and it was his 1st nominated Yearling who won the Interprovincial and wrote her name in the record books. The rest of the racing team

also did an excellent job and it will be 5 or 6 prizes of 6 basketed.

Willy started the 2021 season with a team of 10 hens and 8 cocks both on widowhood.

The winner is B20/2014613. She has not reared any youngsters and has been in widowhood since April. Since April to now she went in the basket every weekend and didn’t once miss making the result.

Last week she became 8th of 422 yearlings from Salbris. Before being basketed for her victory from Vierzon Interprovincial she flew 2x Momignies, 2x Soissons, 1x Sermaises and 1x Salbris.

At the beginning of the week, hens and cocks are given a light mix and from Wednesday, they receive a sports mixture. Once a week, cocks and hens are given vitamins in the drinking water.

Before the start of the racing season, Willy visited for inspection at veterinarian Norbert Peeters.

Then there was treatment for trichomoniasis and coccidiosis. To date, nothing has been done about the respiratory infections.

The pigeons are given eye drops after the arrival of a race.

Hens and cocks are added together half an hour before being taken to basketting. After returning home from a competition they usually stay together until Evening.

The pigeons exercise around home once a day.

The selection is tough and 3 out of 5 races the pigeons have to fly at the top part of the result otherwise they can leave.

The next race will be National Bourges and that will be the same preparation as for Vierzon. Who knows what else will fall from the tree? 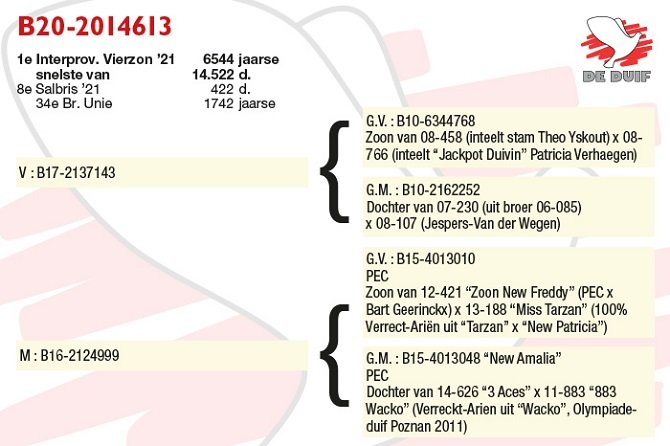 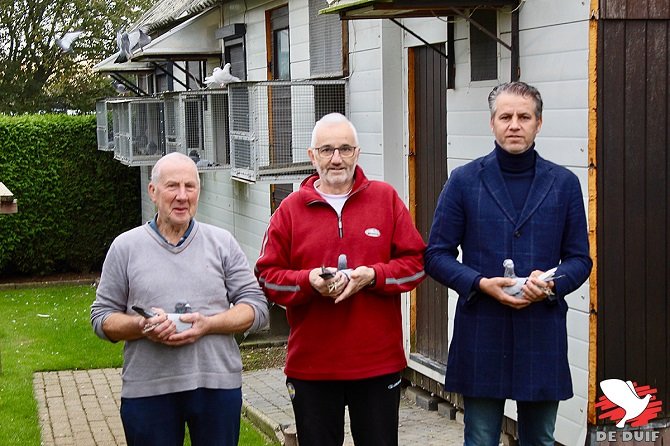 Diest – Diest, on the border between Hageland and the Kempen, is home to Vanhoudt-Serré. The team is formed by Benny Vanhoudt and Freddy Serré, in the process supported by son Bart Vanhoudt.

Last weekend they won the 1st price Interprovincial Vierzon to 1790,62 mpm against 8,008 old birds. In 2020 they were 1st National Champion Small Middle distance youngsters KBDB.  After they had already won 2nd Nat. Bourges, 2nd Nat. Chateauroux and again the 2nd Nat. Chateauroux. The base of the colony is formed with pigeons from Gaston Van de Wouwer, Berlaar and Van Eynde-Goovaerts, Putte.

From the combination Schietse x Van Eynde-Goovaerts, the “De 013” and “De 014” born and these two almost won the national championship between them.

Benny, Freddy and Bart had 10 yearings and 9 old birds in the basket for Vierzon and it’s the 9th marked old pigeon that is the interprovincial victor.

The trio from Diest only race with hens which are played in widowhood.

They had bred a round of youngsters first and were in widowhood for the 3rd week. The team for 2021 is formed by 9 old birds and 12 yearling hens.

As preparation she raced  2 x Momignies, 1x Soissons, 1x Melun and 1 x Sermaises. The hens are

strictly selected and they must achieve half the prizes per 10 to meet the condition to stay.

During the week there is only on Mondays, Tuesday, Wednesday and Thursday at home exercise. The pigeons are not trained by road in the season.

The hens are fed all week “AIDI Girl Power” all week. They always have electrolytes in the drinking water on return from a race. The Vanhoudt-Serré trio follow the AIDI system.

Medically, pre-season the hen team received a treatment against trichomonas and respiratory infections. Since then, no medicines. Additionally, the eye drops of AIDI are used and vitamins are provided once a week.

Before basketing, the hens come together with their cock in the nest box. After arrival from a race they normally stay together until the evening.

Was it a tough race? then the partners stay together until the next morning.

Next week all Vierzon flyers will go into the basket for Bourges with the same preparation as for Vierzon. 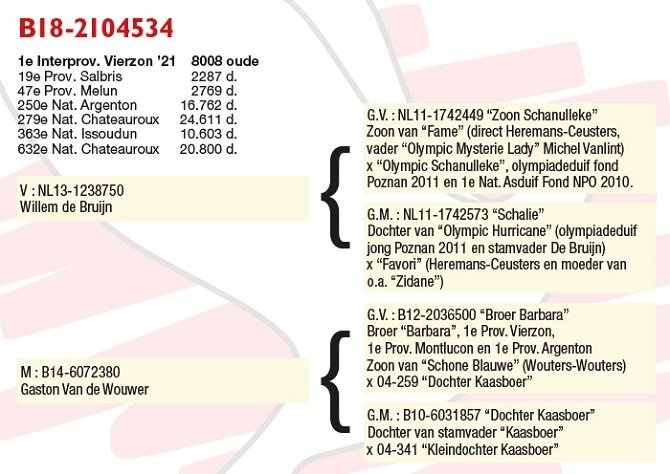