It’s been a difficult weekend for those in charge. Despite numerous weather satellites floating around our planet, hundreds of weather apps on our computers and phones and dozens of meteo services, anyone involved in the pigeon sport from far or near is as reliant upon a good old-fashioned crystal ball.

Taking into account the weather forecasts and a great chance of fog in Pau it was decided for the first international race of the calendar 2021 to move to another liberation site. Eventually the pigeons were liberated on Friday at 7:15 am at the horse race course Hippodrome des Grands Pins in Mont-de-Marsan, about 60 km north of Pau.

Belgium had 3,514 participating pigeons, the Netherlands 4,584, Germany 1,148 and finally in France 5,000 were basketed. Nice to note that all four participating countries are represented in the top five results. The United Kingdom as a result of Brexit this year were not participants.

This year’s International winner was Jean-Jacques Dimanche (57) from Cormontreuil (FR), a charming small town in the French department of Marne, that part of the arrondissement of Reims, in the heart of the champagne region.

Popping the champagne corks could be heard when Jean-Jacques Dimanche had confirmed his “Peggy Sue” FR-19-139876 was first international of 14,246 pigeons This dark chequered hen was recorded on Friday at 15:44 h, she achieved an average speed of 1345.92 m/m over a distance of 685.37 km. She was also the first notified !

Jean-Jacques loves Harleys, pigeons and rock’n roll. “Peggy Sue” was not accidentally named after a hit by the spectacled rocker Buddy Holly.

Jean-Jaques learned the tricks of pigeon racing, (how can it be otherwise), in Belgium when he spent several years with his cousin Désiré Dimanche in Oret in Namur. The father of Jean-Jacques was also infected by the pigeon virus and started with the pigeons in 1980 until 1993.

As a successful entrepreneur after his retirement J.J., meanwhile father and grandfather of two granddaughters, also started with the pigeons in 2018. He now had time, and above all time to do things properly, because he doesn’t like half-time work. If he’s doing something, he’s doing it right. Furthermore, Dimanche is very active within the associations’ and administrative area of the sport.

The Dimanche lofts can accommodate up to 50 breeders and he flies about 200 pigeons, young, yearlings and two-year-old. The old birds are raced on the nest and the young on the perches. J.J. leaves nothing to chance. He buys good pigeons and requests advice from experienced fanciers. His loft consists mainly from pigeons of their own kind supplemented by purchases at Hok Hetru (Pommeroeul), all pigeons from the best Belgian and Dutch bloodlines. 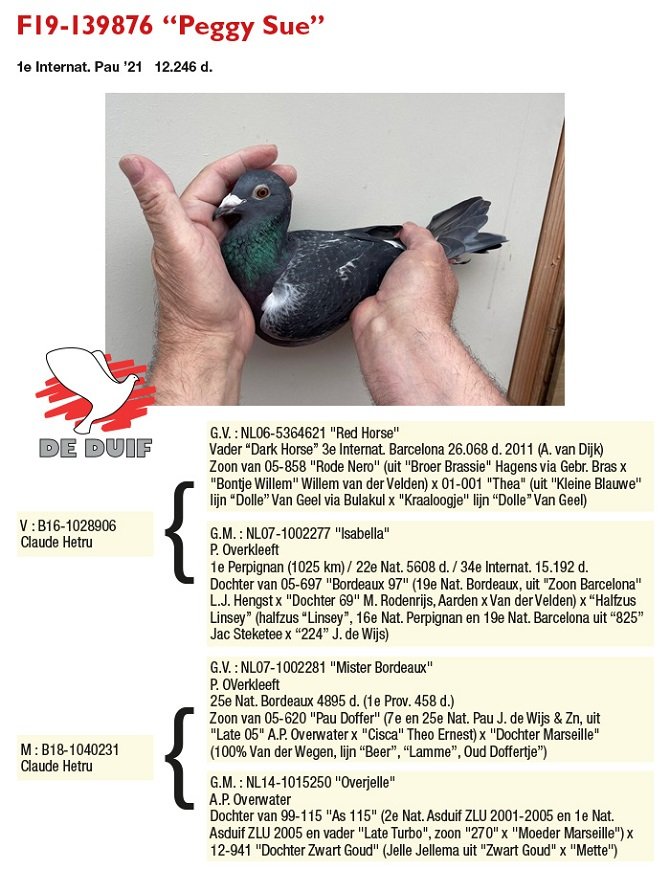 For those who take their passion so seriously, success cannot be far away. Earlier this year, he won with a yearling hen a Federal victory from Aurillac against 6,235 pigeons and now he wins the first International. What else is he going to do?

Good friend Richard Roge, himself a pigeon fancier since 1971, assists J.J. with advice and help. Roge has provided the entire training schedule. J.J.: “Without Richard, I could never have achieved this victory.”

Dimanche pigeons compete in the flight program of the Aisne (French department).

As far as nutrition is concerned, Jean-Jacques relies on the feed mixtures of “Ledoux Père et Fils” and Dr. Leyens (dietary supplements). Twice each year he visits the Veterinarian, at the end of the year and at the beginning just before International flights are about to begin (PAU, Saint-Vincent and Perpignan).

J.J.: “I was hoping to have at least one pigeon home on the evening and was therefore overjoyed when “Peggy Sue” entered the loft She was in top shape at basketing and even after the flight she still looked tip top.’

In the evening I had ten at home and at 20:15hrs I then pulled out the electronic timer. I certainly had the first national in France anyway. They predicted heavy thunderstorms and you never know. When I returned to the loft at 6am in the morning, three more had arrived and meanwhile, most of them are back home.”

The winner has also been taken from the racing loft and is now patiently waiting for the photographer.  If she goes to the breeding loft or will be sold is still not decided, but she certainly won’t go to any further races. One thing’s for sure, Jean-Jacques Dimanche is a name to keep an eye on. You don’t win International Pau by chance.