Koopman and Kleine Dirk…Remains At Number One….

Koopman and Kleine Dirk…Remains At Number One….

Yesterday we published the Sens NPO report from De Duif featuring Gerard Koopman and his winning hen ‘Sifan’. It reminded me of not only the birds we have had from this bloodline but just how great Kleine Dirk actually was.  I truly believe his bloodline changed the history of the Pigeon Sport around the World.

Before the arrival of Kleine Dirk we were already familiar with the Koopman family as they had been at the very top of the sport for many years with their original lines like Zitter, Beatrix Doffer and many more but in particular ‘The Eric’ a supreme racer and breeder and sire of ‘Gentil’  Olympiade Asduif who was paired with the ‘Golden Lady’ daughter ‘Kannibaal’ of Dirk van Dyck and that was the ‘Big Bang’.

When it became clear to us that this ‘Kleine Dirk’ was something very special indeed we wasted no time getting on the waiting list and in the summer of 2001 Mike Ganus, Peter Colijn and I travelled to Ermerveen to make a selection of new stock. 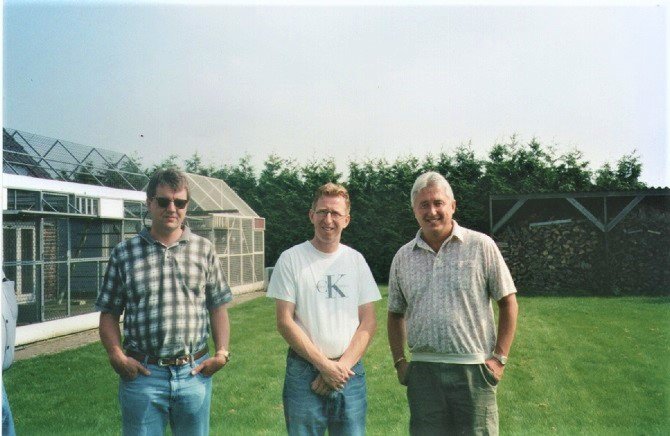 Summer 2001, twenty years ago!! a much thinner Peter Fox with much darker hair visited Gerard Koopman with Mike and Peter Colijn looking for reinforcements.

Upon reflection the birds were not what was expected. We should have noted the literal translation of ‘Kleine Dirk’ i.e. Small Dirk and  we would have expected a smaller type of bird. Of the birds that Gerard had for selection they were indeed small and not beautiful in the classical sense.

Never the less, I came away with a son and daughter and Mike later accumulated a really nice selection of not only direct children but a very special full sister.

I sold the cock as I didn’t have room for a cock at the end of the season and that probably was a big mistake.

The hen NL01-4743640 was three months old when she arrived in North Wales and we named her ‘Gerrie’. My friend the top fancier Geoff Kirkland and Barbara his good lady wife where visiting the nearby ‘Laburnum Arch’ in Conway and called in for a cup of tea.  Geoff made a very bold statement after holding ‘Gerrie’ for 30 seconds…he said she was ‘One of the best three hens he had ever handled in his life’! Geoff not only has one of the best performance records in the entire UK pigeon sport but is without question one of the most respected and when he says this of a three month old hen it really is something to acknowledge.

The results of her progeny has been very well documented over the twenty years and although there have been many superb breeding children of Kleine Dirk like ‘Aladin’ and ‘Dirkje’ dam of ‘Harry’ I believe that ‘Gerrie’ was the very best. She bred them to win in all competitions with many cocks and even today in the fourth, fifth and sixth  generation they remain better than ever. Real pre potency. 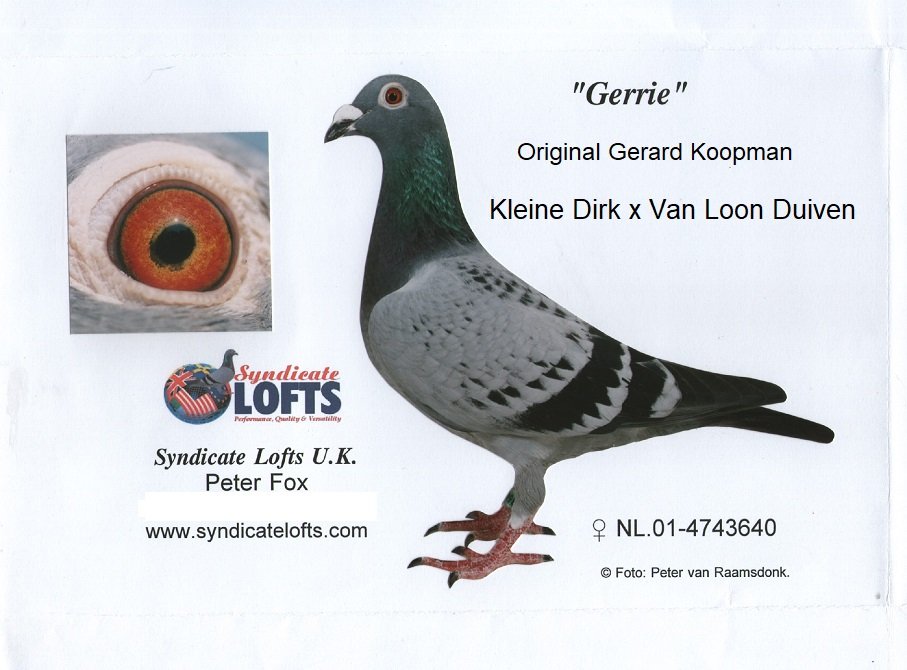 Probably the best breeding daughter of Kleine Dirk ever!

We did not have so many from Gerard Koopman but one very special one we bought at auction from Northern Premier Premier Auctions in the Autumn of 2002 and he was a real star however fate would play a hand and he died at five years old sitting on the nest.

We purchased  NL02-4758387 a small bodied, heavily muscled blue cock that shivered with vitality. He bred exceptionally well from the very first nest.

His mother ‘Amore’ was of course to become a legendary breeding hen and her direct children later commanding massive amounts of money at auction being dam of amongst others the mother of the famed ‘Harry’ of Jan Hooymans, and ‘Kleine Gerard’ was her first youngster ever sold after her racing career and did super well in our breeding loft before he died way too young. Sire of ‘Kleine Gerard’ was a direct son of ‘Kleine Dirk’.

‘Blauw 607’ was purchased at our removal sale by Heijblom & van Streijn our friends and fellow Fédération members where she became their basic breeding hen being mother to ‘Witneus Girl’ (When paired to a son of Hermans Hoekstras ‘Witneus’) winner of 2 x 1st,1 x 2nd,2 x 3rd,2 x 4th,1 x 5th 1 x 9th in just nine races as a youngster before she herself bred NL13-3356497 ‘De Kleine Blauwe’ winner of 1st National Sector 1 Chateauroux 11,948 birds. 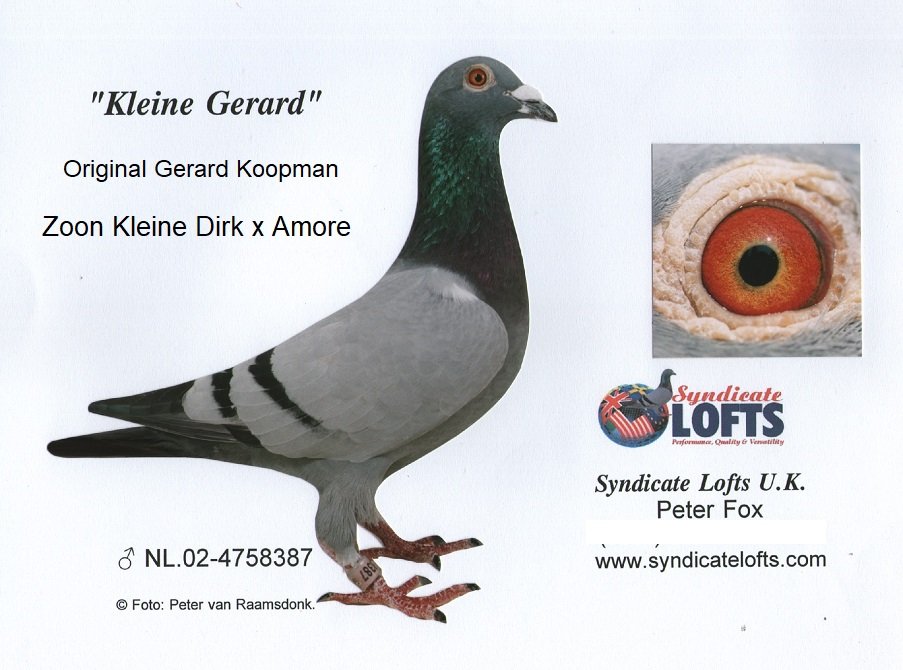 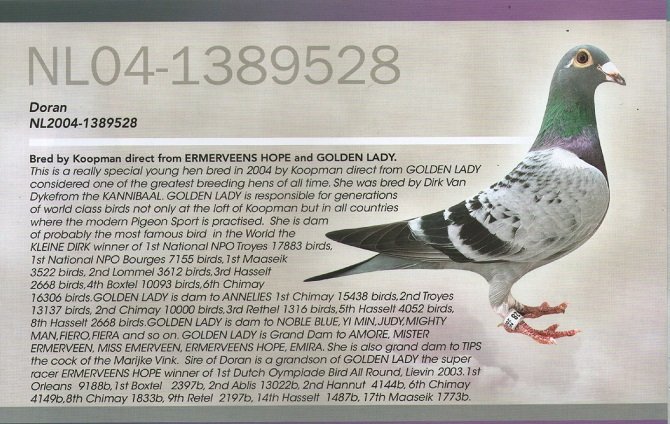 ‘Doran’ a quite unique hen and a Golden Breeder. She is A direct daughter of Ermerveens Hope and Golden Lady.

She was to become famous in a very short space of time breeding many super racers and breeders… for example when paired to ‘Drum’ she bred ‘Johannesburg’ one of the very best breeding sons of Drum and his line is still going strong through his descendants like his son ‘Pharaoh’ the cock of our top breeding couple ‘The Portugal Pair’…another one from ‘Drum’ and ‘Doran’ is ‘Mystique’ bred by Syndicate Lofts and raced by Crehan and O’Connor and considered one of the greatest racing and breeding hens ever in the UK. A son of  ‘Mystique’ is the ‘Mysterio’ cock owned by Dave Atkin of Lincoln and  he is one of the best breeders himself in the country today. Another son of ‘Doran’ this time paired with ‘Zabel’ is Leach Brothers of Hebden Bridge’s sensational breeder ‘The Syndicate Cock’ the foundation of an entire dynasty for  them.

A recent introduction to our breeding loft is ‘Solomon’ a quite magnificent specimen of a cock being bred direct from ‘Jerson’ Gerard Koopman’s Olympiade Asduif when he was coupled with ‘Miss Marakot’ winner of 1st Provincial against over 11,000 birds.  This way can not be bred again as ‘Jerson’ is now in the far East. His bloodline is dominated by ‘Kleine Dirk’ everywhere in his pedigree. 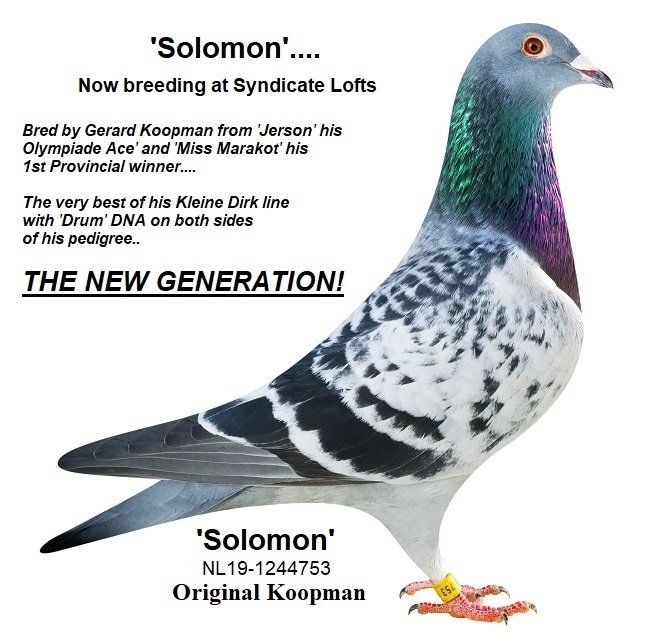 ‘Solomon’ a quite magnificent son of ‘Jerson’ the Olympiade Asduif Fond with Miss Marakot the 1st Provincial winner from over 11,000 birds. Only a very young cock but his potential is massive and I predict he will become one of our new talisman in the breeding loft. He really has everything needed. Soaked in Kleine Dirk blood everywhere in his pedigree…a real handsome specimen that breeds his type…total quality in the hand being very muscular with a one pin tail and dark rich eyes…the complete package.  He will be central to progressing and improving our Drum and Dutch Master winning genes.

Finally after reading the Koopman report once again after winning Sens NPO with their hen ‘Sifan’ , I think we are back full circle. A telephone call to Gerard Koopman is needed to see how we can get something from her.  A hen that wins a really tough NPO race from almost 600km by 20 minutes clear of her loft mate and 2nd NPO winner after nine and a half hours on the wing against almost 11,000 birds with many losses in the race and a pedigree featuring as much Kleine Dirk, Golden Lady, Cassius and Ermerveens Hope as close up as it is possible to breed today is absolutely what we need.