In August 2006 my attention was gripped by an auction near Liege in Belgium organized by La Columbophile Belge ( Family Herbots) and it was a two day Clearance Sale for the exceptional breeding loft of the German fancier Werner Stellermann.

Just some of the lots were five different German National Ace Winners. A daughter of Lowikie of Jan van den Pash. 24 direct Janssen Brothers.11 children of Gunther Prange’s Ringlose.4 children of Dirk Van Dyck’s Kannibaal plus two from Den Bourges and a daughter of Rambo.4 children of Engles Den 231′.the absolute top from Van Hove Uyterhoven. 2 from Gaby Vandenabeeles ‘Wittenbuik’ plus 3 from ‘Bliksem’ and 2 from James Bond.   3 from Bobby of Van Leest Peeters. 13 direct Schellens including tywo from Nationaal 1 plus 3 from ‘Vooruit’ of Louis de Leus. A son and daughter plus a brother and sister of Fieneke 5000 of Flor Vervoort. 8 direct Antoon and Hilde Reynaert including three from ‘De Figo’.

My imagination was captured by a unique collection from Cornelis and Gerard Koopman. And we were not talking about just some grandchildren but directs from ‘Kleine Dirk’..’Ermerveens Hope’…Noble Blue’…’Mister Emerveen’…Annelies’…Deng Lings Favoriet’…’Branco’ and the absolute stars of the show, three children of the world famous ‘Golden Lady’.

My interest was just one bird Lot 42 NL04-1389528 ‘Doran’ bred from ‘Golden Lady’ with her own grandson the Olympiade Ace ‘Ermerveens Hope’.

So it was off to Liege on Saturday 5th August arriving in plenty of time for viewing. A pleasant surprise was bumping into my old pal Brian Bolton who also had a shopping list for Mr Sparks who was setting up the Premier Stud at the time. Brian was also after the direct Golden Lady’s however we very quickly had a strategy for Brian and I to take the three home.

NL04-1389528 ‘Doran’ was a very small hen as I expected being inbred  but she was a fantastic shape and had everything I had hoped for, so I bought her.

The first nest in 2007 saw me pair her to Drum, himself an inbred Kleine Dirk/Golden Lady and I was not sure what to expect, and in the first nest I bred GB07L02105 a beauty of a checker hen, again not too big but absolute class. She went to John Crehan of the Creahan and O’Connor partnership of Salford who purchased a bird from us in the previous November in a charity auction. She was to become ‘Mystique’ considered one of the greatest racing and breeding hens ever in the UK. Her bloodline is still super potent down through the generations especially through ‘Mysterio’ her exceptional breeding son owned by  Dave Atkins, of Lincoln. It was also in June 2022 that I read the report her grandchild had won the Pioneer Ace Bird Award in Taiwan and that is without doubt one of the biggest competitions in the world. Certainly the biggest prize money. 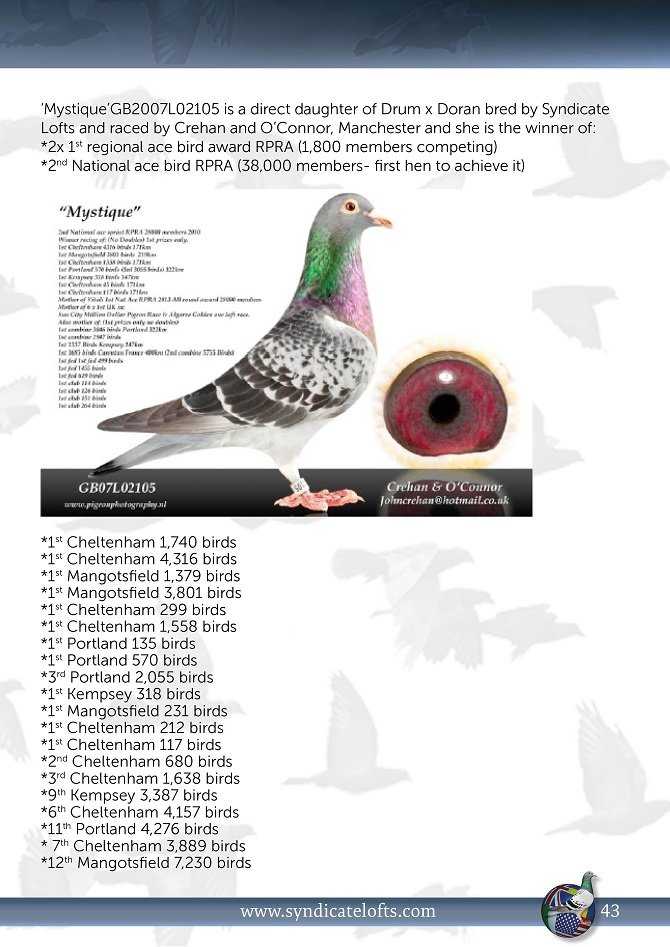 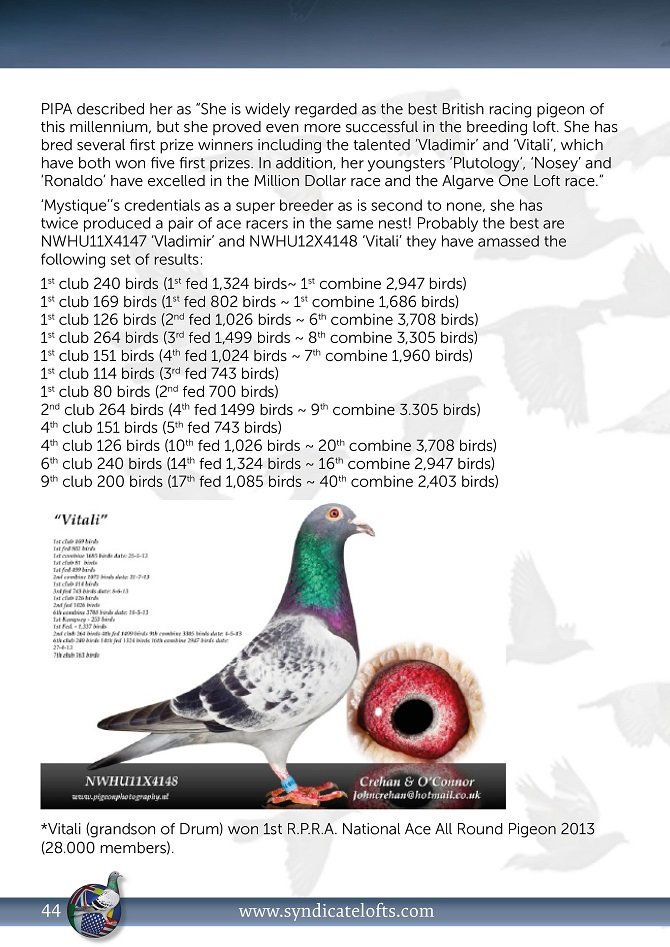 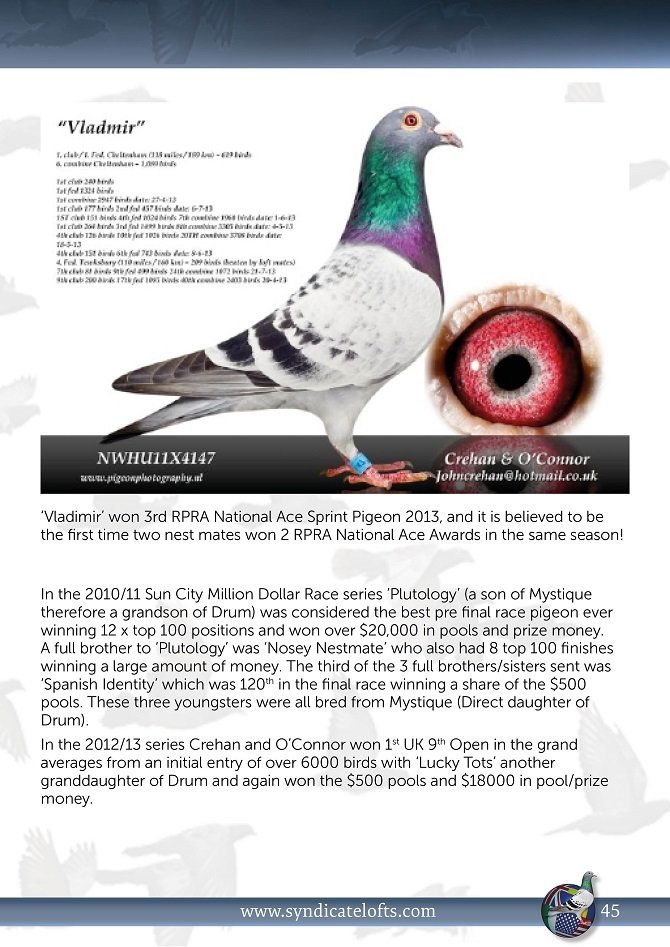 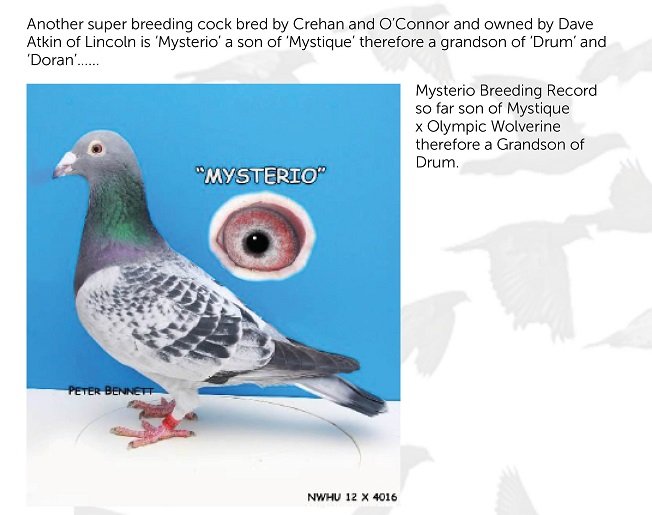 A full brother to ‘Mystique’ was ‘Johannesburg’ probably the best ever breeding son of Drum. Maybe the best breeder ever direct from Drum !  and that is a big statement.

In June 2022 the Scottish fancier Ian Hunter won the Moledo Yearlings Championship One Loft Race in Portugal a race that had a very strong entry of 2607 birds entered by 291 fanciers, many of whom are really top One Loft specialists with a very strong German entry with over 500 in the final. The winner was from a son of the Portugal Pair a grandson of ‘Johannesburg’ once again!. 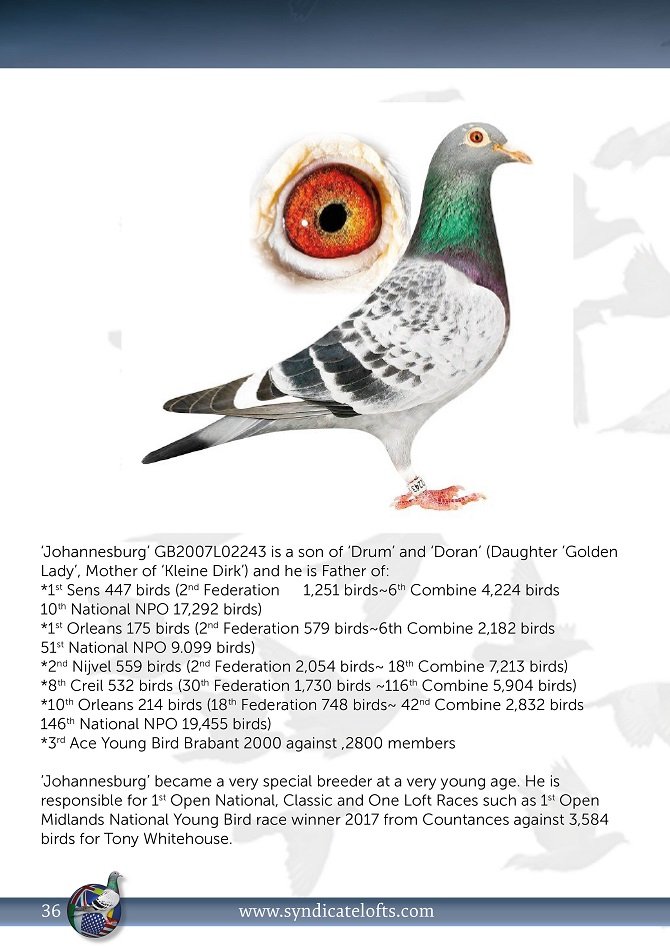 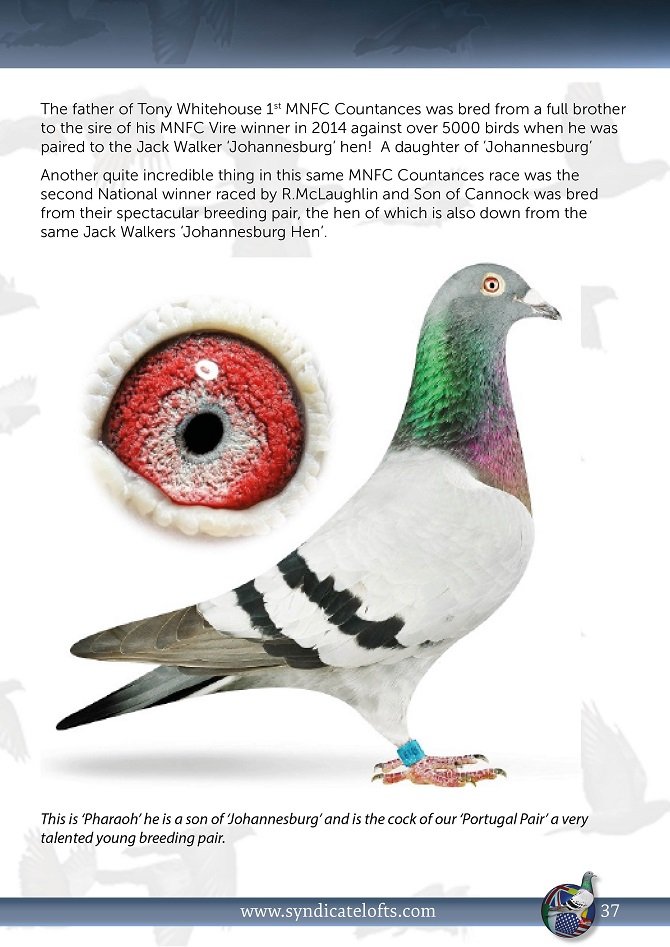 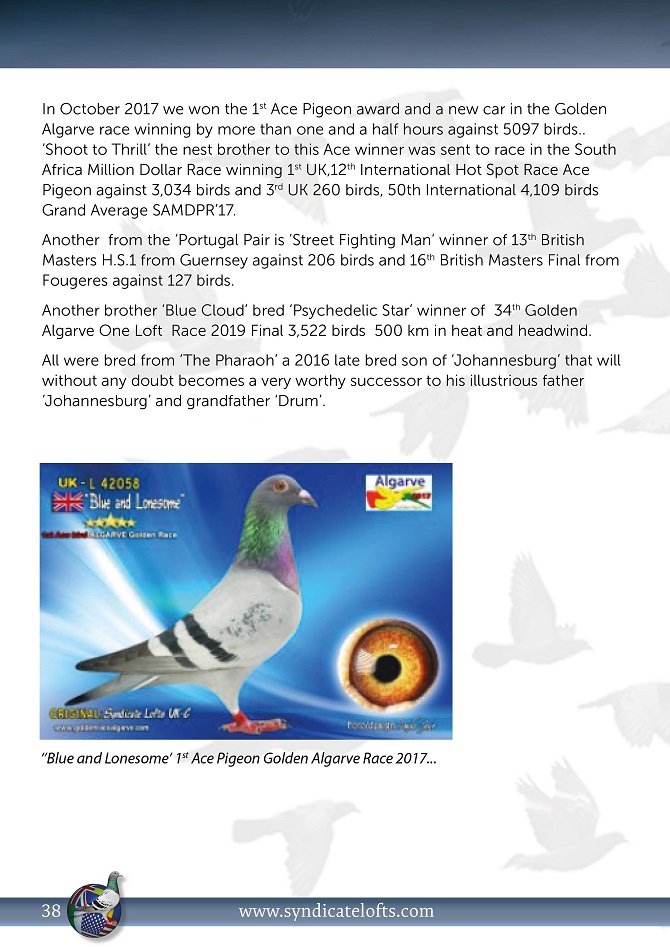 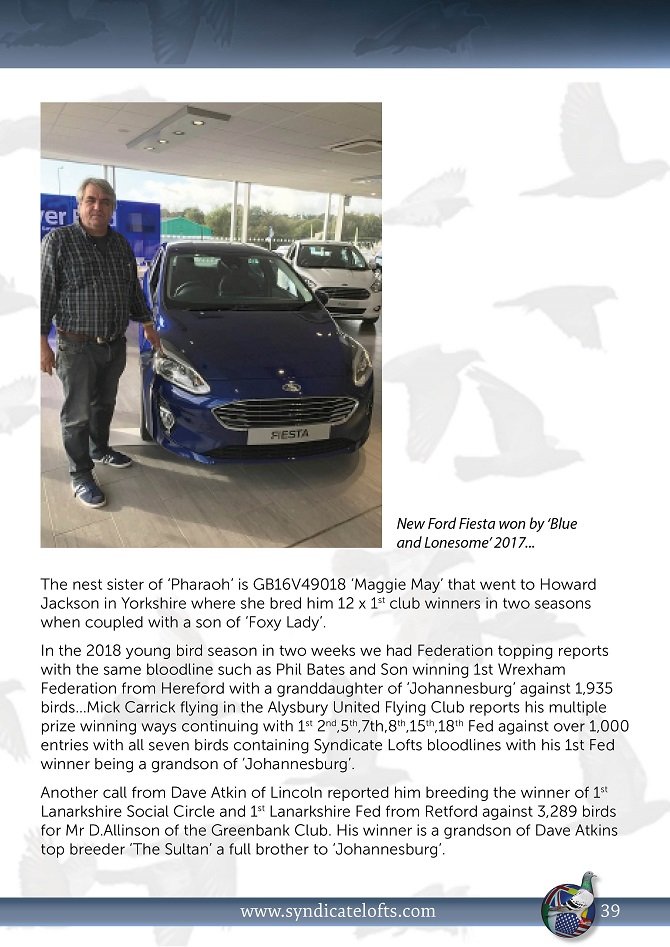 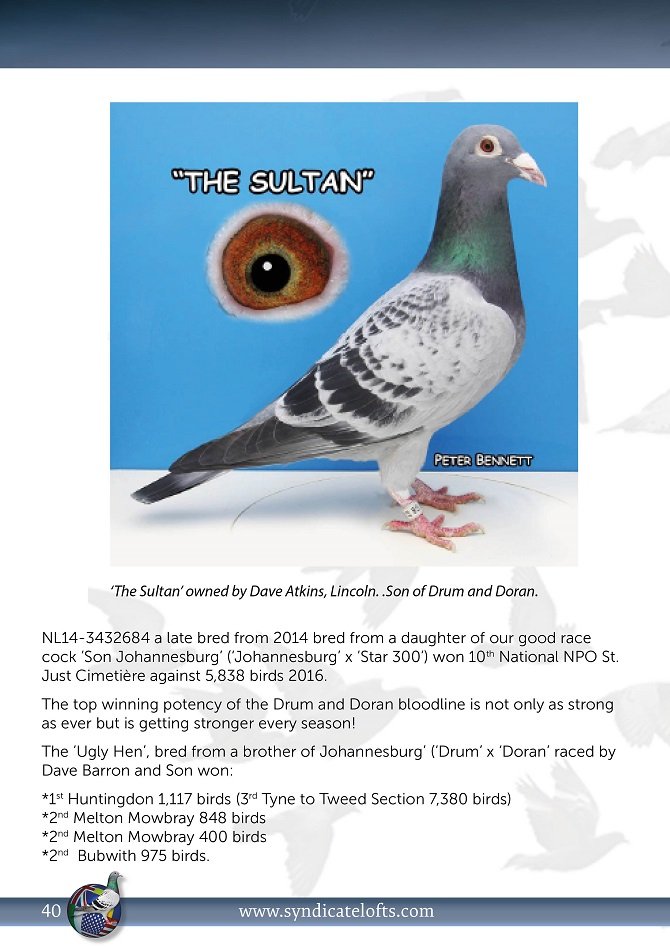 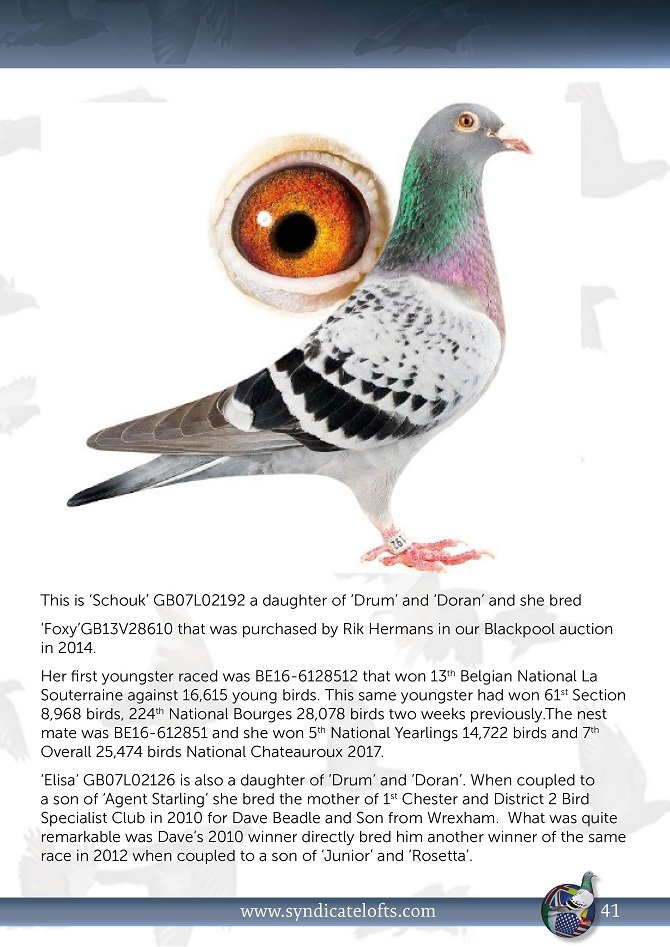 Another quite fantastic breeding cock was the ‘Syndicate Cock’ of the Leach Family. 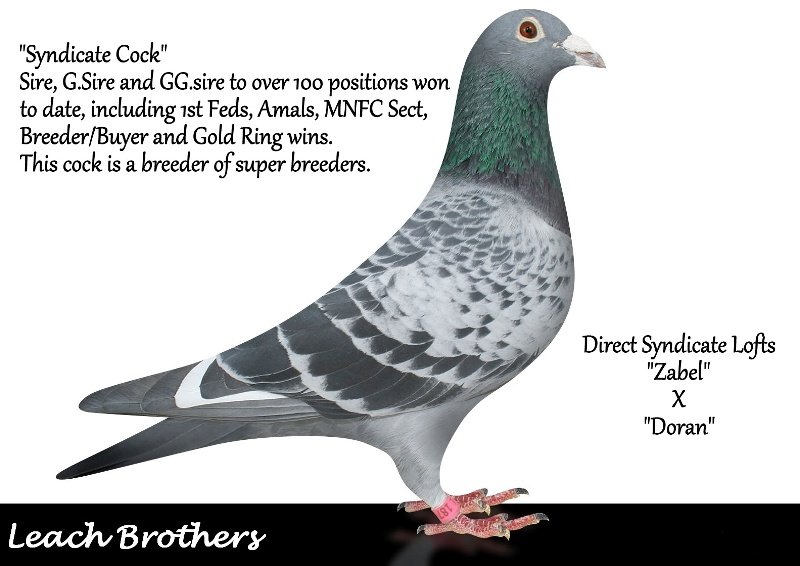 In a message from Adrian Leach, he highlighted some of the performances. A lot more results have been achieved since then down from this top breeding cock as that was four years ago. A lot more offspring have won since then.

Just out of interest I attach a list of the results that I know about which have been won with direct children but mainly G.Children of our Super star ‘The Syndicate Cock’

I often wonder how many results are out their bred down from this old lad that we aren’t aware of ?

Top positions won with Children / G.children of ‘The Syndicate Cock’

So , ‘Doran’ proved herself as a really top breeding hen. There was also many more top results from her and her descendants when paired to other cocks as well. But we have to stop somewhere.

What was also quite remarkable is we only had her in our breeding loft until 2010, so a total of four breeding seasons!

Then in a total moment of madness we sold her to Great Wall Lofts in China at six years old.

Some decisions we get right but that one was wrong.