I am delighted to report a really fantastic result in one of the most prestigious races in the UK and Ireland Pigeon Sport.

The winner of the Irish Blue Riband event of the year of 1st Irish National Flying Club Saint Allouestre is O.Fitzpatrick and Son of Guilford, Northern Ireland with their Champion Hen ‘Wee Lily’ winning the King George V Challenge Cup and the NIPA Trophy. What makes this result really special is the winning speed was 837 yards per minute for the 476 miles, a real test of bravery, stamina and intelligence. Only 72 birds made the result from an entry of 2,827 birds entered by 674 fanciers.

The winner bred and raced by O.Fitzpatrick and Son of Guilford originated from the bloodlines of their good friend Dessie Breen of the D and J Breen partnership.

In 2007 Dessie Breen bought a young hen GB07L02162 that we sold with  Gerry McCourts Auctions in Dublin. This hen became a principle breeder for Breen and Son breeding many top racers in multiple generations including her direct son ‘Owens Pride’ winner himself of 3rd Open Penzance Classic and RPRA Award for NIPA Section E from Talbenny and Penzance. It was descendants of ‘Owens Pride’ on both sides of the pedigree crossed with the famous Willie Beers ‘Birdy’ bloodlines and ‘Mr Bond’ of Eijerkamp that produced the winner ‘Wee Lily’.

We bred GB07L02162 from a yearling cock ‘Tom Tom’ that we bred from the famous ‘Golden Gaby’ when he was coupled to ‘Greta’ a direct daughter of our ‘Young Couple’ (More on Greta later). The dam of GB07L02162 was Syndicate Flamingo our winner of 9th Open Flamingo International One Loft Race in Florida winning $9000 prize and pool money. Her sire was the JOEP winner of 2nd National Tours 11,866 birds ,3rd National Chantilly 13,203 birds,10th National Chateauroux 6,000 birds, and 15th National Orleans 11,601 birds. He is bred from Hercules when paired to HERMA a direct daughter of the world-renowned breeding couple GOLDEN MATTENS and SISSI.

GRETA the daughter of the YOUNG COUPLE herself bred the 3rd place Channel Challenge One Loft Race 2006 winning £3500 and she was the nest sister of GB04J76529 owned by Geoffery Douglas of Lurgan and also became a really top breeder including the sire of his ‘Foxy Jack’ winner of 1st NIPA Inland National Rosscarberry Young Birds in 2009 against 4,399 birds . So a pair of nest mates from the Young Couple became responsible for two Irish National winners!

Very many congratulations are well deserved by all fanciers involved in this great triumph. 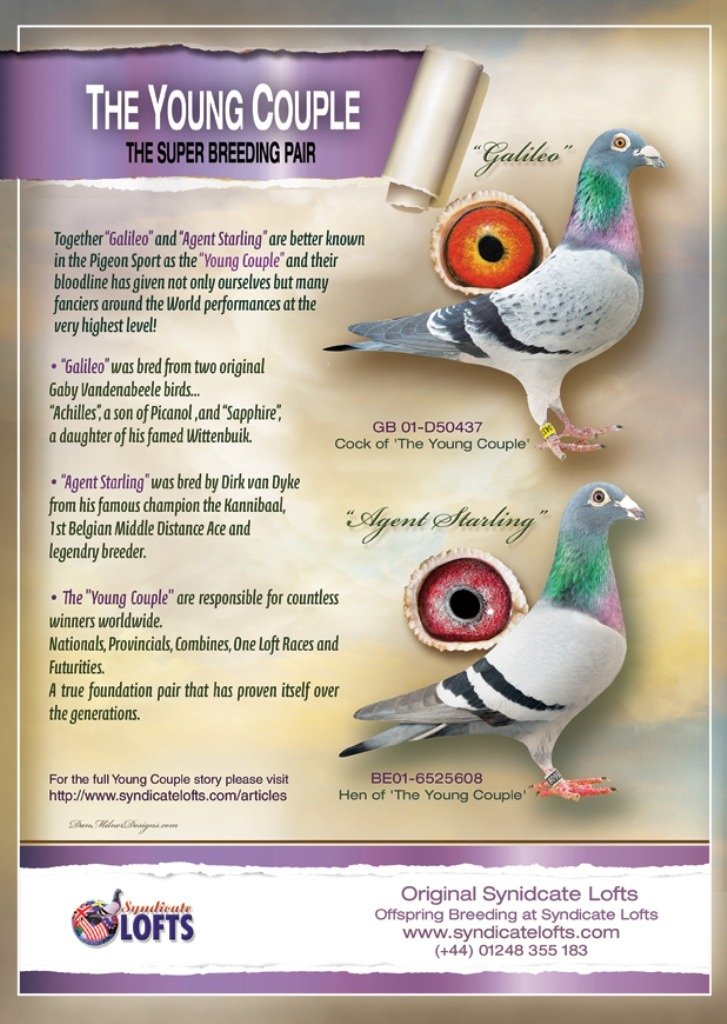