One Loft Race Update For September…

One Loft Race Update For September… 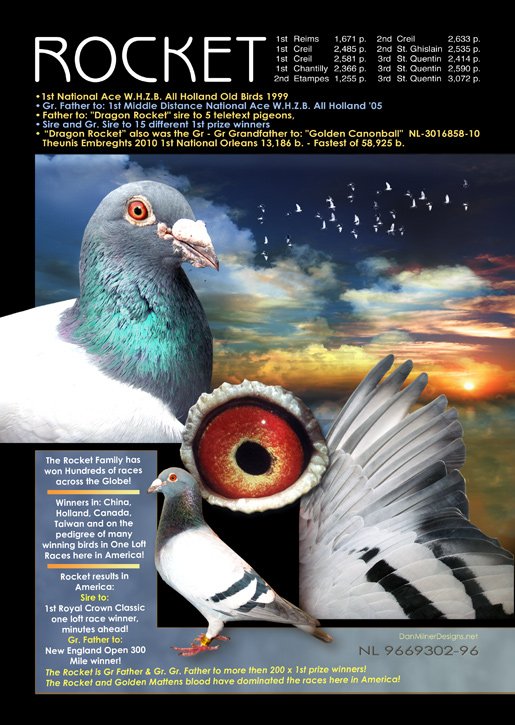 ‘Rocket’ bred and raced by Rinus Van Gastel and owned by Ganus Family Lofts…As a racer a Dutch National Ace winner and as a breeder his bloodline is totally World Class!

We had some races ending in September and some others getting into full swing.

The British Masters International One Loft Race Final was held on Sunday 19th September from Aycliffe to the home loft in Brighton a distance of 261 miles.

Out of the 1310 original entries, 419 were basketted for the final in what turned out a fair but testing race with 131 birds in total arriving on the day. The heavy rain showers in the last 80 miles of the course having an effect on the race.

It was unfortunate that the first pigeon home was ‘disorientated’ upon arrival no doubt due to its heroic efforts in the last part of the course and sat out for over twenty minutes. Shame as it would have been a clear breakaway winner.

It was however the same conditions for every bird competing and the best bird on the day was triumphant and we must offer David and Emma Armstrong many congratulations on their great win.

Also not forgetting Darren Ede winning the Ace Bird award and no one can say he didn’t deserve a bit of an uplift after the outcome of the last Sun City Million Dollar Race when he won many thousands of Dollars in Prize and Pool money only for the race owners to default and pay out nothing. Darren is a young working man and that was a set back that I hope he is now getting over.

Our own performance was average but never the less it was pleasing to get four birds home on the day in the top 100.

Our first bird was Johnny B Good a Cor de Heijde /Waalre marathon bloodline for 55th.

Our second bird for 82nd was Lennon a son of our great cock Nitro bred by Dirk Leekens and is a full brother to his famous Blue Viagra from his Lucky Luke and Milton lines. Dam of Lennon was Blue Oyster a daughter of Golan our top breeding son of Young Couple when he was coupled with Sunday Girl the daughter of Harry.

Our fourth bird for 97th prize was Rolling Stone and this was very pleasing for us as it was the first one we have raced from Blue Spider a very promising new cock bred by Luc and Hilde Sioen from their champion breeding cock Spidey. Dam of Lennon was  Juliet a daughter of Brave (Nieuwe Rossi and Eenoog) coupled with Little Star (Daughter Di Caprio).

The Prince of Wales International One Loft Race final was held on 26th September when 127 bird were basketted from an original entry of 513 birds and were raced from Ramsgate a d1stance of 213 miles. Once again it was a very difficult race with only 61 birds home after three days.

Our own performance was poor with only one bird in the result at 47 position and she was Sweet Loretta a full sister to the fantastic racer and breeder ‘Basil’ …The Racing Machine. I have no doubt this hen will go on to breed well for her new owners as she was a really nice small muscular hen when entered.

Many congratulations to  Mark Evans our very first auctioneer who with his partner Mr Nelson won the first prize and also to Jason Bright winning 1st Ace Pigeon.

Although we did not enter the ‘Who Dares Wins’ race we was very pleased indeed to receive a call from Mr Dave Atkin of Lincoln reporting a quite amazing performance , I think one of the best ever in a British One Loft Race of a young cock bred from his very special Mysterio bloodline. It is well known that Mysterio bred by Crehan and O’Conner has a quite breath taking breeding record and we are proud to have bred ‘Mystique’ his dam and she believed by many to be the greatest breeder / Racer ever in the UK. She is a daughter of  Drum our base breeder.

The Colliery Lads entered the blue cock NEHU 21-SP3304 and he was the final winner from Arbroath 250 miles also won the semi final from Kelso 183 miles and won 1st Ace Pigeon by a clear 57 ypm. He won approximately £50,000 in prizes and pool money. Many congratulations indeed.

The first of three races we entered in the USA was the Hoosier Classic race one held on 24th September from 150 miles. A total of 2492 birds were entered from an original entry of 4487 birds and we are delighted to win 23rd prize with GB21V38282.  This bird is once again bred in partnership of Ganus Fox and all birds are tested in the racing loft in Holland amongst the very strongest competition of Europe and the principle One Loft Races as well as many top fanciers in the sport and one thing is very common, the success strike rate is phenomenal.

The cock GB21V38282 is from a half brother/half sister on the sires side from Abagail the supreme breeding daughter of Rocket and Mona Lisa.  Dam of ‘38282’ was bred from a granddaughter of Rocket when he was paired to his own daughter.  ROCKET has got to still be one of the most potent winning lines in the Pigeon Sport World.

On the 29th September the second race of the Hoosier Series when the remaining 2309 birds were raced was raced from 180 miles. Once again it was very pleasing indeed to have two very early ones in 11th and 16th place.

First bird was GB21V38286 and was bred from a son of Thomas 6 quickly becoming one of the best breeders in the world when he was coupled to Mix. Dam of 39286 was a daughter of the well known Wolverine when coupled with Diamond Girl bred by Rik Hermans from Propere 11 and Minerva. This hen Diamond Girl also bred the 1st Ace Pigeon in the Hosier Classic 2018 winning $47,354. 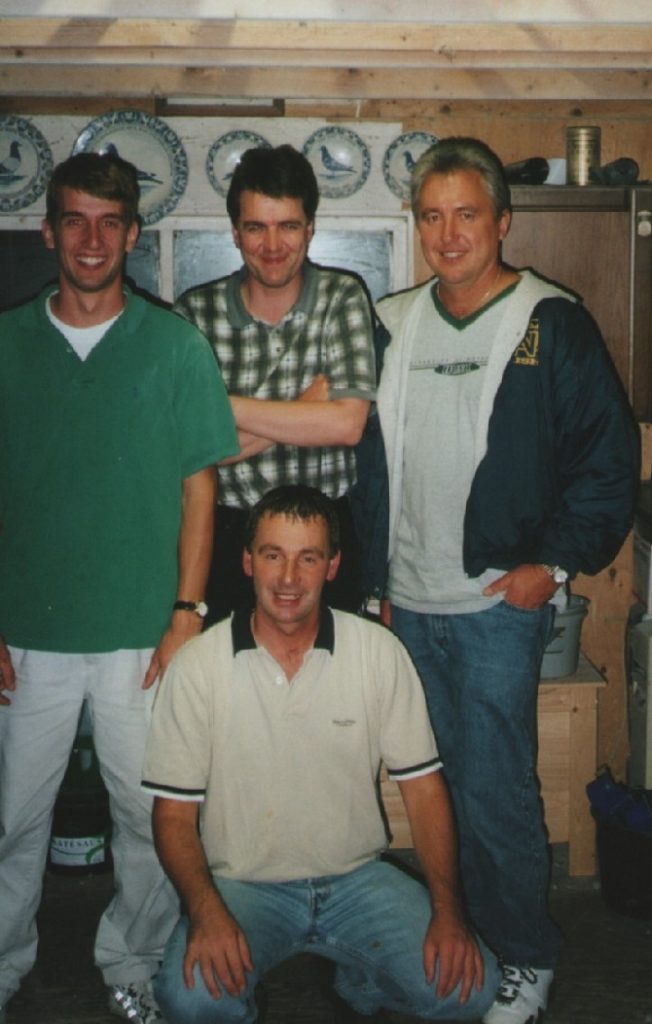 Andy.. Peter F.. Mike…Peter C in Nieuwendijk around 23 years ago!

The 29th September was also the first race of the Crooked River Challenge 200 mile race against 837 birds and we are very pleased to have won 8th prize. The slatey he GB21V38205 was bred in partnership with my great friend Andy Skwiat and was bred from past performers in the Hoosier Classic featuring mainly the old original lines of Aviator , Black Widow, and once again inbred Rocket on the sires side with Mattens and Hollywood on the dams side.

I must also offer sincere congratulations to Andy’s girlfriend Marlee on her exciting entry to the Pigeon Sport. Breeding from a son of War Drum (Grandson Rocket)and Stardust (Dtr Di Caprio) and a daughter of ‘Foxy Lady’ (G.Grandaughter Rocket with Topo and Casanova) with ‘Propere Rik’ both coupled with successful ex racers bought back from races she has achieved immediate success in the Blue Bucket Stampede winning 1st Breeders Team of 1st Two clocking after race two and 3rd Overall averages speed after two races. We all know there are no guarantees for longer final races however for a new starter in the sport she must be super thrilled. We have all experienced that thrill of starting racing with the birds and I hope she builds on this in future years of this great sport of ours.

So now we go into October with two finals in Portugal this weekend…The Algarve Golden Race and the Algarve Great Derby.  Then its the finals of the Crooked River…The Hoosier Classic and the Cuevas Classic in the USA and then we go into December/January for the Pattaya International. Then we start all over again with a new season in Holland from March until September.

A fancier from the East Midlands of England asked me in the British Masters if we actually test our pigeons by racing. Don’t know how to answer that one!!