Propere Rik….One Of The Very Best We Have Ever Owned…

Propere Rik….One Of The Very Best We Have Ever Owned…

I was very fortunate to be able to secure ‘Propere Rik’ for our breeding lofts from Jan and Rik Hermans. Jan and Rik had a super breeding pair ‘Propere’ and ‘Kleine Martine’ that produced a multitude of super racers and breeders into the fifh and sixth generations. The bloodline of both base breeders was predominently the super ‘Kannibaal’ of the late great Dirk Van Dyck on both sides.

Jan and Rik were very reluctant to let BELG2011-6341771 ‘Propere Rik’ go as he was breeding in the partnerships Hermans Van den Brande breeding loft and he was a rare quality that some pairs breed very occasionally. Even world class pairs.  I could have him on the understanding that he would be returned to only them if I ever let him go.  Once again I was humbled by the genorosity of my late friend of many years Jan Hermans.

There was very little chance he would ever leave our lofts as he bred winners after winners from the word go in our breeding loft with most hens paired to and his DNA was very quickly a central thread in our breeding plans breeding top performers in Club,Federation,Classic and National in addition to One Loft and Specialist club winners for ourselves and many others.

On the same day our friend and Dutch Champion Peter Embreghts Theunis won 5th National NPO Melun against 10,233 birds with one bred from his super hen ‘Athenas Rossi’ herself the winner of 5th Dutch National Ace Young Bird and also dam of the fantatstic racer of last season, Olympic Rossi. Dam of ‘Athenas Rossi’ was a daughter of ‘Propere Rik’ x Athenas Best’ gifted to Peter.

Two weeks before last Mr William Donachie from Scotland reported breeding the winner of 1st Lanarkshire Federation from Wooler against 2,766 birds raced by Barclay McCrindle and Son. Dam of the winner was a daughter of ‘Propere Rik’ x ‘Pixie’

The week after that Mr D.Sloan and Son of Airdrie in Scotland won 1st Open Lanarks Federation Alnwick against  2000 plus birds with their super racing yearling cock with plenty of previous form that was bred from a son of ‘Stevie Wonder’ a son of ‘Propere Rik’ x ‘Foxy Lady’. ‘Stevie Wonder’ was brilliant breeding cock for Mr Jackson of Yourkshire before his transfer to Mr.Tim Atkin the top Warwickshre fancier.

Breeding top performance pigeons is made a lot easier when we start with the right genes! 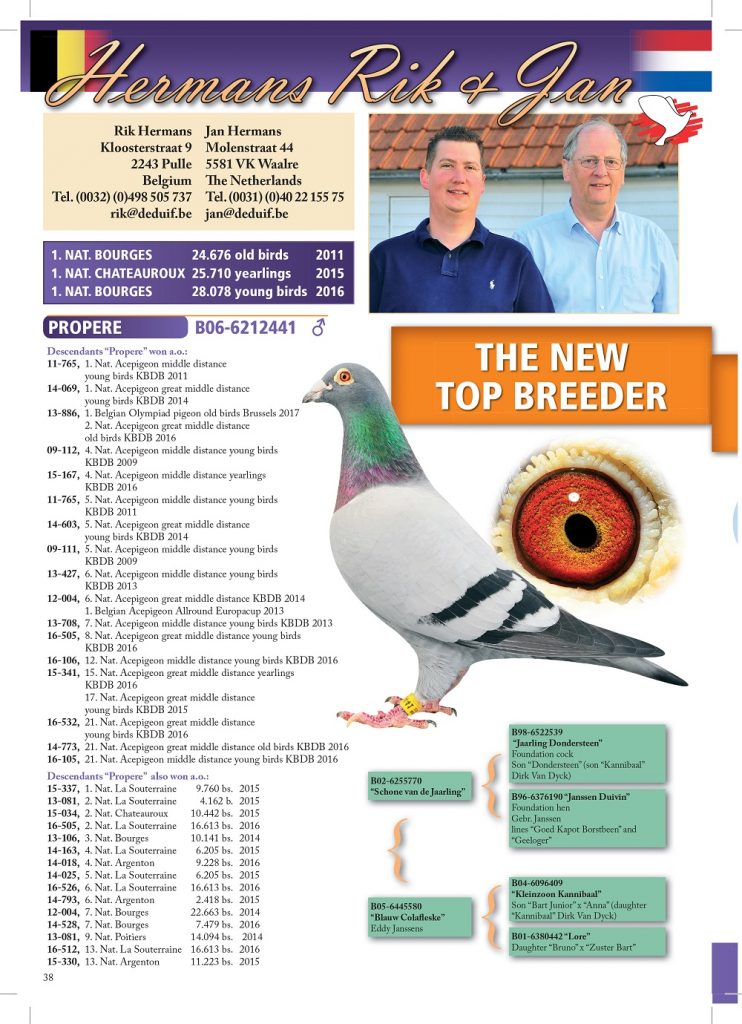