‘The Duif Chronicles Online’ …at www.syndicatelofts.com

It was still early Thursday morning when the alarm went off. Before daybreak and the dew we got in the car for a drive to Calais.

Calais is located on the Strait of Calais within sight of the English coast and is therefore the main port on the mainland for passenger transport with Great Britain. Add to that the tunnel under the channel from Calais to Dover, which is more than 50 km long, of which 37.9 km under the sea, and it is not surprising that Calais has been in the news frequently lately, even before the corona outbreak, due to the many immigrants.

As you could read in this newspaper last week, Robert Ben wished to stay out of the public eye after his international victory from Barcelona, but after a long push through various different contacts we finally got in touch with him and were allowed to come to “an audience” with Le Phénomène last Thursday at 9am.

Since Robert’s legendary “048”, renamed “Super Ben”, grew into a phenomenon that was unprecedented, he gained the status of a ‘Super Star’ in his own region, and also for a lot further beyond. A status Robert himself certainly wasn’t waiting for. Leave him with his pigeons. He is averse to commerce and visitors, although his close friends are always welcome.

Robert himself says: “I have more sentiment with my pigeons and in the loft, and especially on arrival from a big race, than for any first date with an earlier love.” That is fully agreed by his daughters Sandra and Virginie, who were raised largely by Robert after the early death of their mother, Robert’s wife. Sandra: “Daddy has sacrificed his whole life to the pigeons. The family always came second, although we could never complain about his commitment to us.”

Sandra even raced briefly with the pigeons, but the main task of the daughters Ben was to take care of the pigeons, and especially the clocking of the pigeons as father Robert had to work from 14:00 to 22:00.

Meanwhile Robert is 72 years old and has been retired for a while, and he can lose even more of his soul and find happiness in the pigeon loft.

He built up his colony with predominantly Dutch marathon bloodlines and succeeded mainly with pigeons from Mrs. Jopie Sprenkels, Peter van den Eijnden and Lei Kurvers-De Weerd. Together with a comrade he visited these fanciers in the Netherlands frequently and always tried to take some of the best to France.

However, the last visit to the Netherlands dates back to 2007, when he visited Jelle Jellema together with Michel Dubois. It is clear that Robert Ben does not have his eyes in his pocket!

Robert still builds on that old base; the only notable acquisitions are two more pigeons from the aforementioned friend Michel Dubois.

Robert races with about 40 widowers and also has a number of hens between the youngsters, but they do not train well enough and the performances are corresponding, according to his own words.

The widowers exercise twice a day for an hour, but it is open loft, there is never any forced flying.

In terms of nutrition, Robert still relies on the different mixtures from Versele-Laga. The late Mathieu De Clippel was one of his close friends. As an extra, some hemp seed is regularly provided. There is feeding in a joint container and the pigeon’s get so much that after each feeding a left over always remains.

No partner is ever shown before the basketing of the preparation flights. For basketing for the “big” races (the Internationals), the pigeons access the other half of the box for an hour, and just before the cocks are put in the baskets they can join their hen for 1 to 2 minutes, with Robert making sure that they do not tread the hens.

In preparation for Barcelona, the pigeons flew Argenton (480 km) and another 600 km race after a shorter preparatory race.

“Super Ben” was not so small, rather long and narrow, with extremely soft feathers and a huge wing relative to his body, and beautiful dark eyes.

It was striking that he delivered several of his exploits with a west and northwest wind, so with the wind right on the head. That makes things even more special.

A few days later, Japanese businessman Hiroshi Kijima suddenly showed up at the door, and although his insane bid was first rejected, a few days later the family gave in and with pain in the heart they waved farewell to the “048” that was renamed “Super Ben”.

How did Robert fare with the descendants of “Super Ben”? Robert: “Suddenly everyone was standing here at the door. I’ve handed out way too many to friends.” 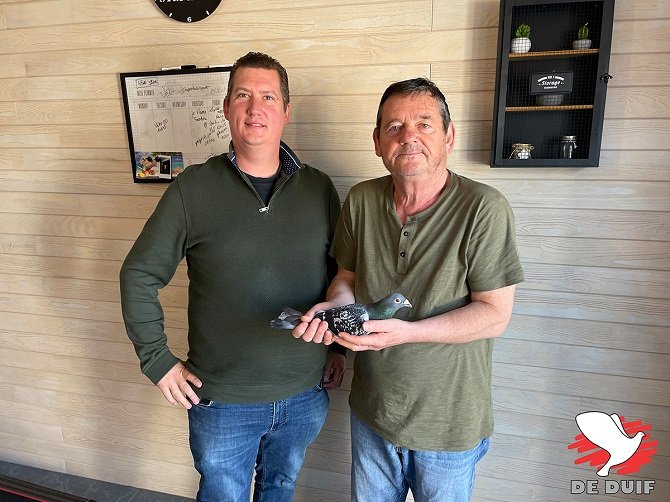 Robert was watching the final of the European Championships with a look half on the TV and half on the pigeon loft.

Robert: “I don’t have internet here, I don’t even have an electronic system. My brother also has pigeons, but during the moments of the arrival of a flight we do not call each other, I find that far too stressful. Suddenly I saw a pigeon fall from the corner of my eye, it was already quite dusky. I quickly clocked that pigeon and called my brother, who could tell me that there were already about 30 pigeons at home. He looked at the computer, and then it turned out I was at the top.

I got a bit nervous, winning Barcelona internationally was a dream, but of course it wasn’t confirmed. I definitely had a restless night and didn’t get much sleep.

The next morning it really became crazy with everyone who wanted to call me and congratulate me. I didn’t respond anymore, I wanted to wait for my pigeons quietly, although it took until 6 pm before my second pigeon arrived”.

Anyone who thinks of the shortest distances in France are partly deceived and should consult Google Maps. Robert Ben, for example, flies further than Joost De Smeyter (1033 km) and only slightly shorter than Barcelona specialist Frans Bungeneers (1086 km) and the fanciers in Dutch South Limburg (Maastricht 1065 km).

The “003” had already earned his stripes with two handsome prizes in 2018 and three prizes in three races in 2019, making him 17th best European Ace Pigeon over 3 races, before having to go into the basket for his Barcelona debut in 2020.

However, the “Ad Blue affair” (the French pigeons were mistakenly given the fuel additive Ad Blue instead of drinking water, which took almost all French pigeons out of the race and returned them to the fanciers) threw a spanner in the works. 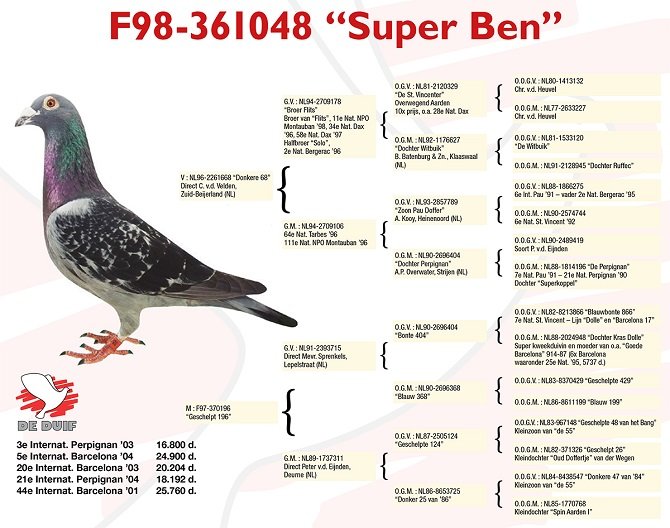 The “003” was renamed “Barcelona Ben” in the style of “Super Ben”. He is a small (a typical Dutch marathon) pigeon that is well built, with a beautiful wing and a beautiful eye.

In the meantime, he was sold to the Hermans family, who also mediated the sale of “Super Ben”. Before he will probably join his great-grandfather in Japan, he will certainly stay in Belgium for a few more months. 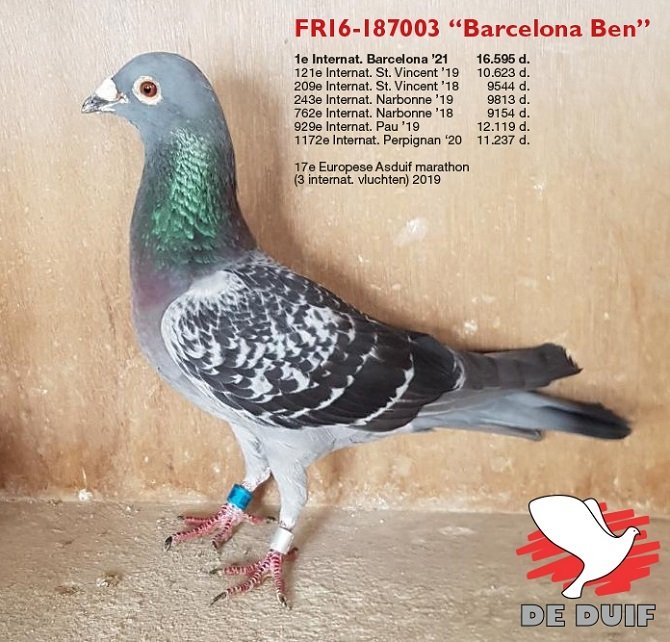 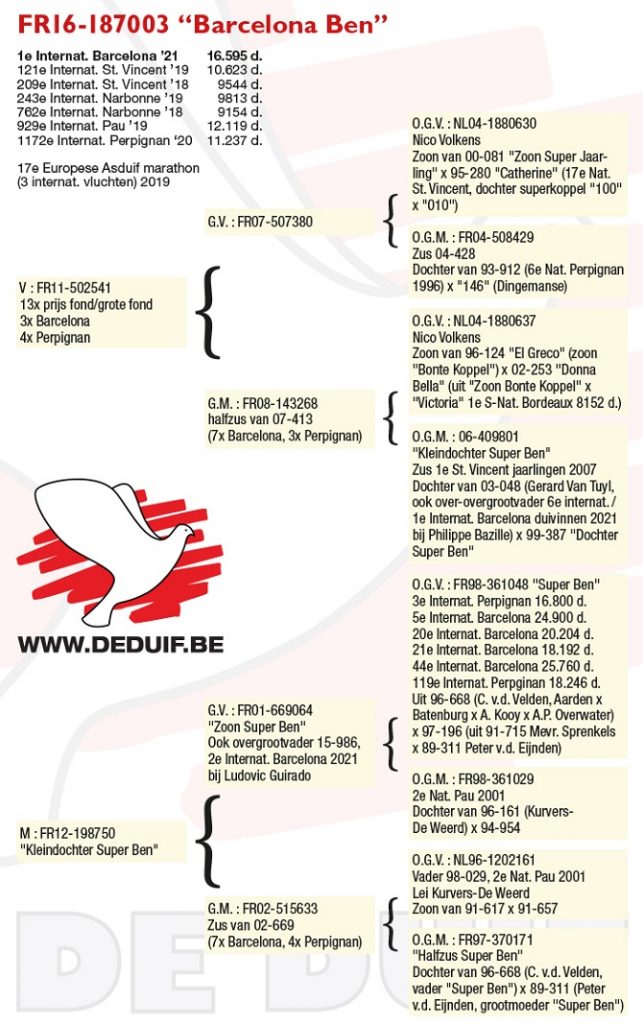 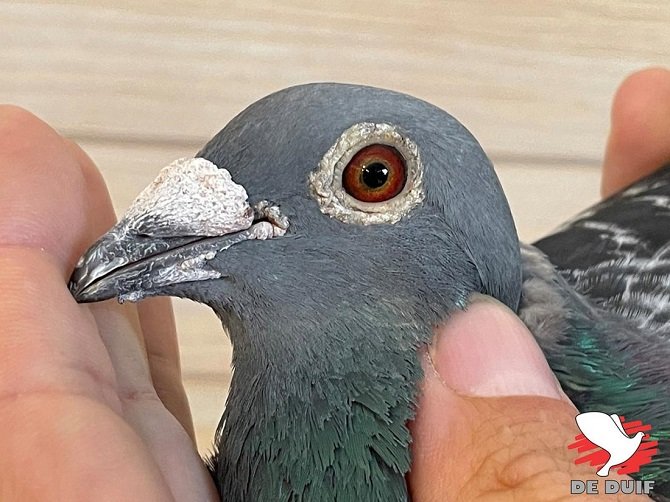 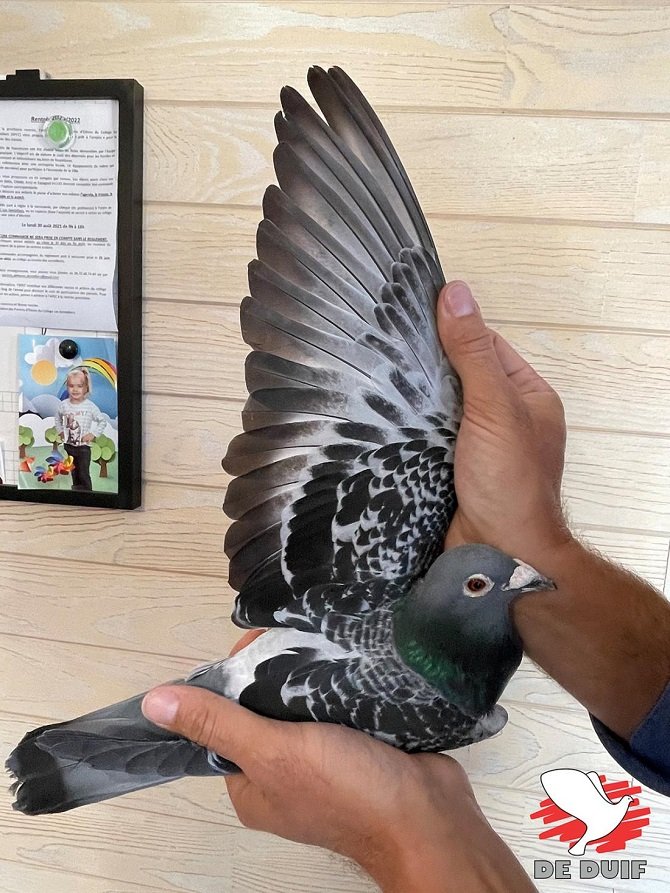 Robert has handed out a lot of pigeons according to his own words, but is also proud that others have great success!

Robert came across to us as a sympathetic fancier. After a pleasant chat we were able to return home satisfied to basket the pigeons for Guéret! 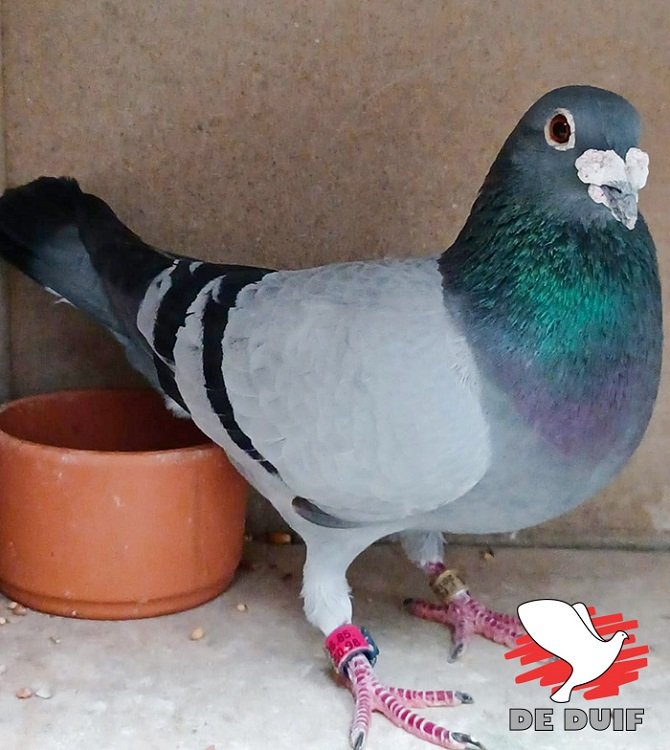 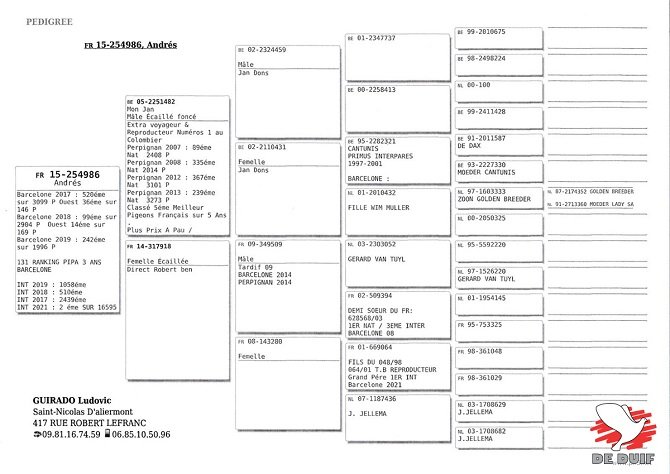 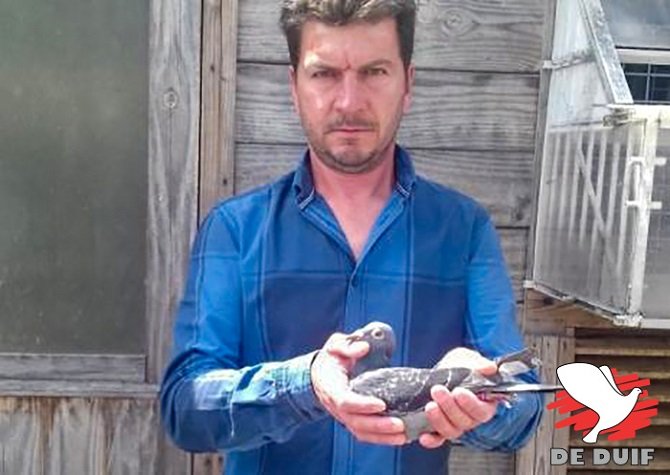 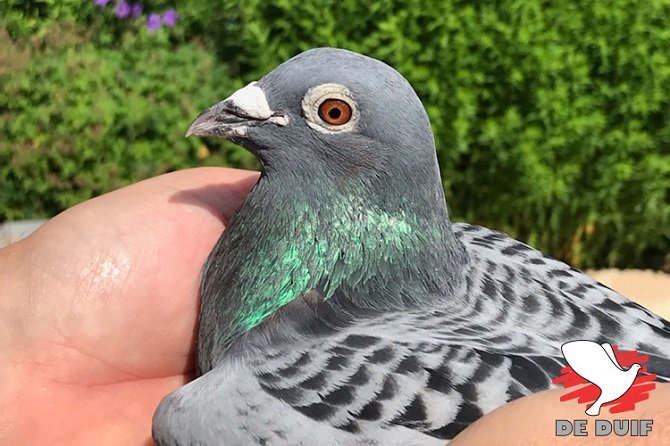 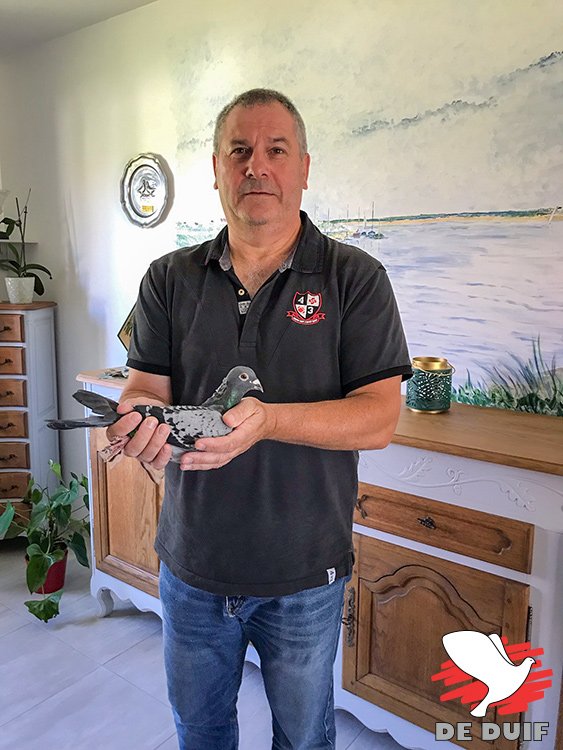