Once again I am grateful to receive a message reporting recent top performances with descendants of some of our original bloodlines. This time its a very special message indeed from Mr Peter Van Helden a friend and ex clubmate of ours in Nieuwendijk and together with his father Sim is a partnership I would consider one of the best performance lofts with small numbers and in the very toughest competition in the Netherlands today.

Mr Sim van Helden used to live in Nieuwendijk before moving to Hardinxveld and is a friend of Hans Colijn. This resulted in a few gift birds and eggs from the breeders. This was at a time around twenty years ago when Mike Ganus, Peter and Hans Colijn and myself were just establishing the winning combination in Brabant 2000.

At that time Mike had invested very heavily in the Dutch, Belgian and German National Ace winners together with many Olympiade Champions and some truly spectacular breeders from the Ace fanciers of the sport.

Mike had sent the original Vandenabeele birds back to my loft which included over twenty from Wittenbuik, four direct from Kleinen, six from Picanol, more from Ronker, Fideel, James Bond, Kolonel and so on and a little later some from Sissi. Two direct from Sissi with Wittenbuik and others via Mattens and daughters of Sissi from Hans Vultink. These Vultink birds were ‘mustard’ producing many super birds including King of Etampes and his champion sister Morning Star which then produced Irish, Blue Eddie and so on.

I was just finding out just how good the Young Couple were and the many children of Dirk Van Dyck’s Kannibaal and the Kleine Dirk children of Koopman where going through the selection process. Drum hadn’t entered our breeding loft at that time as he was still racing with Marijke Vink.

The strategy was to cross as much winning DNA as we could together providing it was the very best available regardless of cost and degree of difficulty in obtaining and with breeders in Nieuwendijk and North Wales together with regular reinforcements from Indiana and race the offspring in the Nieuwendijk club that was a part of the Brabant 2000 Province in the southern part of the Netherlands. This was and still is a traditional hot bed with some of the Pigeon Sports biggest ever names like Schaerlaeckens, Claessens,Stable, Zoontjens, Verhoeven and many more competing every week against tens of thousands.

The original birds from Mike such as direct children of Topo, President, Ikon, Super Champion, Supercrack Olympiade 699, The Godfather , Pinacle, Rocket and the Ludo Claessens, Schaerlaeckens, Hofkens, and the old 019/Jonge Merkx Janssen blood were quite sensational. Still is all these years later.

Anyway happy days and great pigeons …what we all dream of. 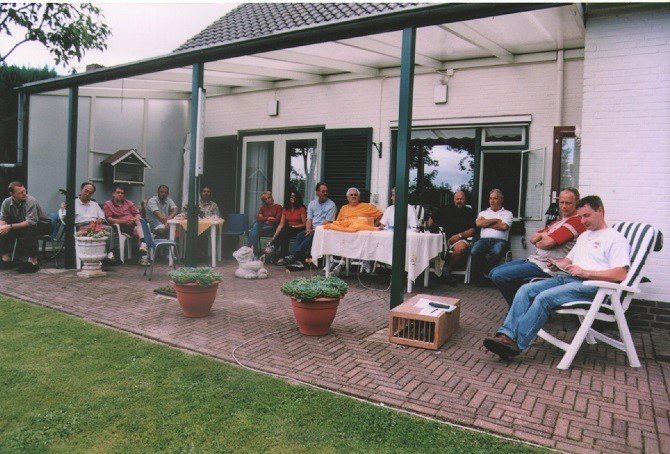 Saturday morning in Nieuwendijk around twenty years ago waiting for the birds with visitors from China, Kuwait, Americans various (Texas and Las Vegas) rest are locals with myself, MJike and Peret Colijn and his Dad.  Photo was taken by our late friend Peter van Raamsdonk assisted by his dog Bobby.

One of the gifts to Sim and Peter van Helden was a direct son of our great cock ‘Kannibaal King’ a son of our ‘Young Couple’ and a terrific racer and breeder. This cock was hatched in 2006 when Kannibal King was at the height of his racing power. He was coupled to our top hen ‘Blauw 607’ a daughter of Kleine Gerard a youngster we bought from Gerard Koopman in the Autumn of 2002 being bred direct from Amore the hen that would subsequently win 1st Dutch National Ace and become very famous as a world breeder including her daughter Dirkje who later became the mother of ‘Harry’ of Jan Hooymans. Mother of ‘Blauw 607’ was ‘Poppy’ one of our very best direct daughters of ‘Kannibaal’ Dirk Van Dyck.

‘Kannibal King’ with ‘Blauw 607’ in 2006 also bred our ‘Lady King’ (Not to be confused with Lady King of 2011)  another fantastic race hen that would become a fantastic breeder after winning 1st Pithiviers 858 birds and 14th National NPO against 12,842 birds as a youngster.

‘The gift ‘Zoon Kannibal King’ bred for the Van Heldens ‘Vader Kannibalina’ NL15-1719784 a cock that scored himself and when crossed with some of their own top performance lines bred ‘Kannibalina’ a winner of 3rd Provincial Duffel against 12,405 birds and she became their principle stock hen. 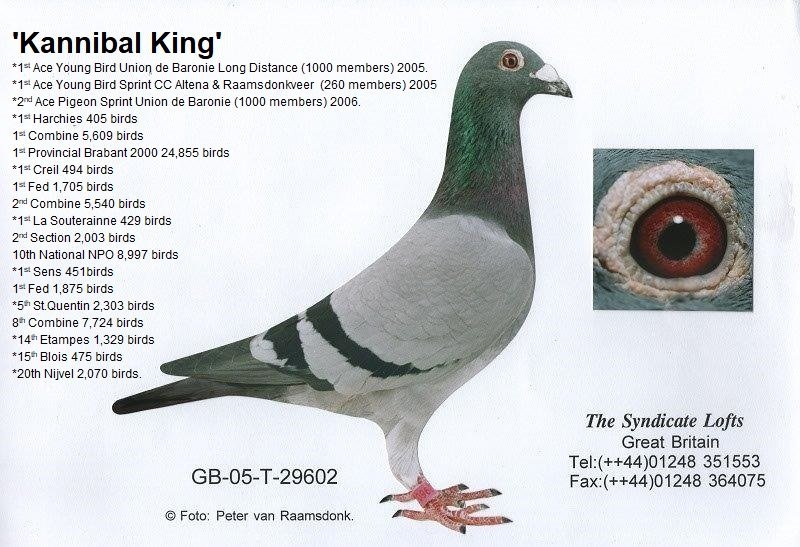 Kannibaal King super racing son of the Young Couple raced in Nieuwendijk bred in North Wales and bought at three years old by Ludo Claessens who unfortunately had him stolen from his loft after six weeks of ownership. Although  Kannibaal King had a very limited breeding career he became a top breeder and  together with his brothers and sisters had a profound effect on our breeding loft.  The quite incredible thing is after all this time the winners from this line into the extended generations shows no sign of diminishing. 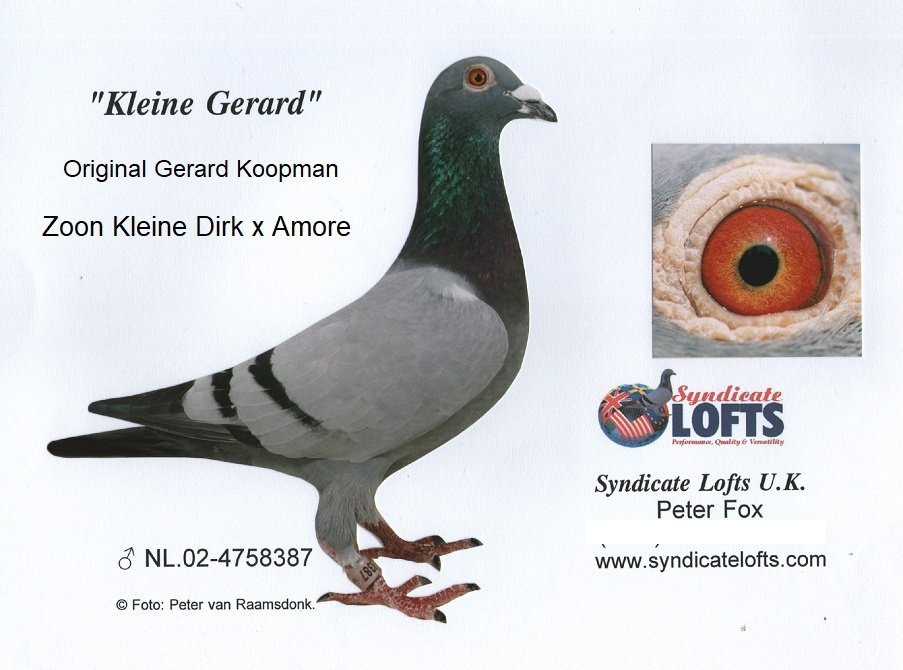 Kleine Gerard the first one bred from Amore in the year she won Dutch National Ace Eendag fond and later became renowned as the grandmother of Harry of Jan Hooymans.  Kleine Gerard bred super well for four years then just died one day. Probably his heart? When paired to Poppy a daughter of Kannibaal he bred the grandfather of  The Van Helden’s ‘Kannibalina’. 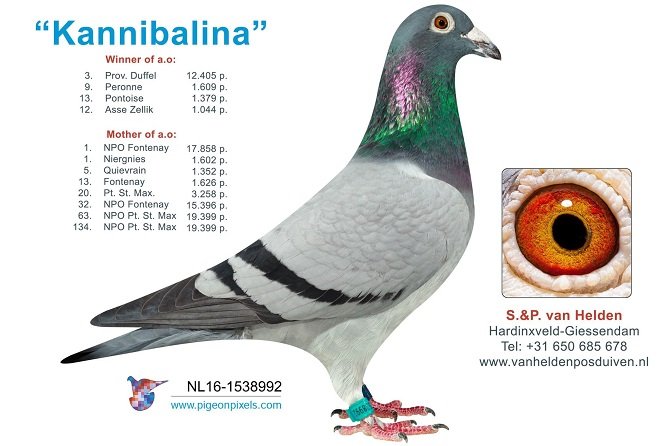 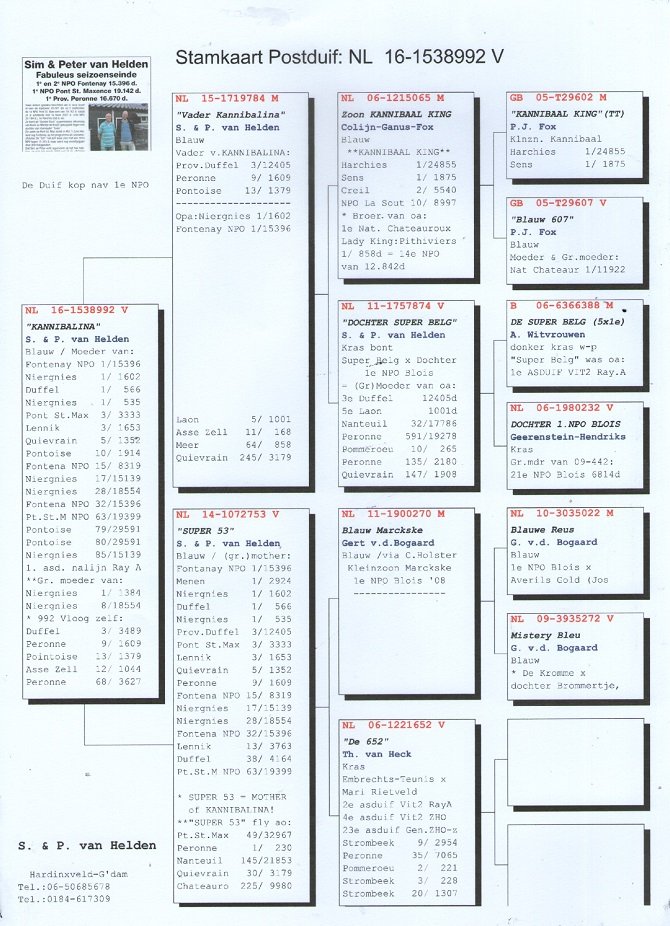 Some other gift youngsters and eggs to Sim van Helden resulted in ‘Sven’ the base pigeon of the Van Heldens. His is also descended from ‘Kras 393’ that became the mother amongst others of 1st As Duif Mid Fond ZHO. She was bred from a ‘Zoon Foxy Lady’ (Again not be mistaken for the current Foxy Lady of 2014) and she was from the magnificent Ludo Claessens blood paired to a daughter of ‘Majestic’ son of Ikon winner of 1st Dutch National Ace Mid fond owned by Mike Ganus. 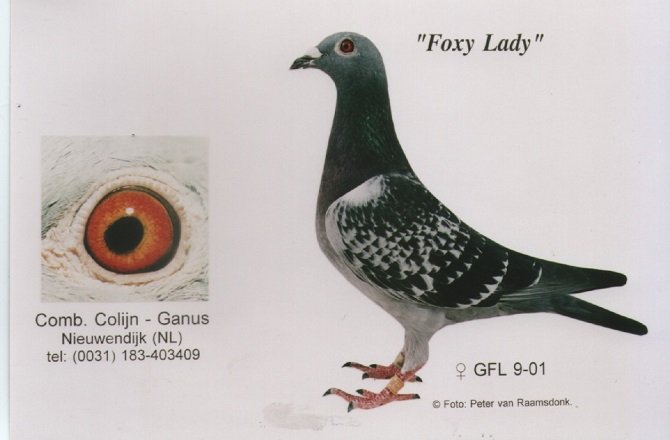 Foxy Lady of 2001 (Not to be confused with the current Foxy Lady) . She was a daughter of the ‘Vos 77’ the super breeder of Ludo Claessens. 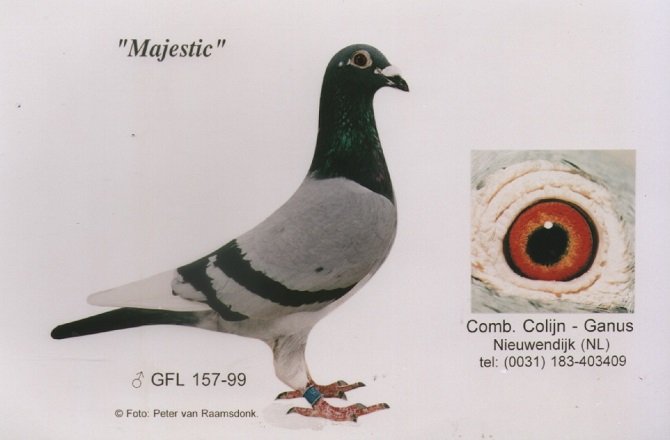 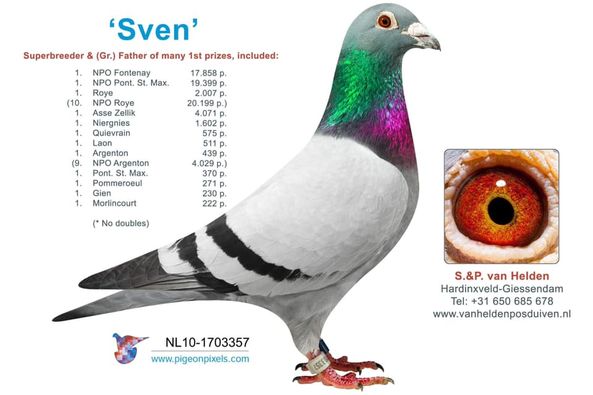 Sven the basic breeder of the current Van Helden Loft. 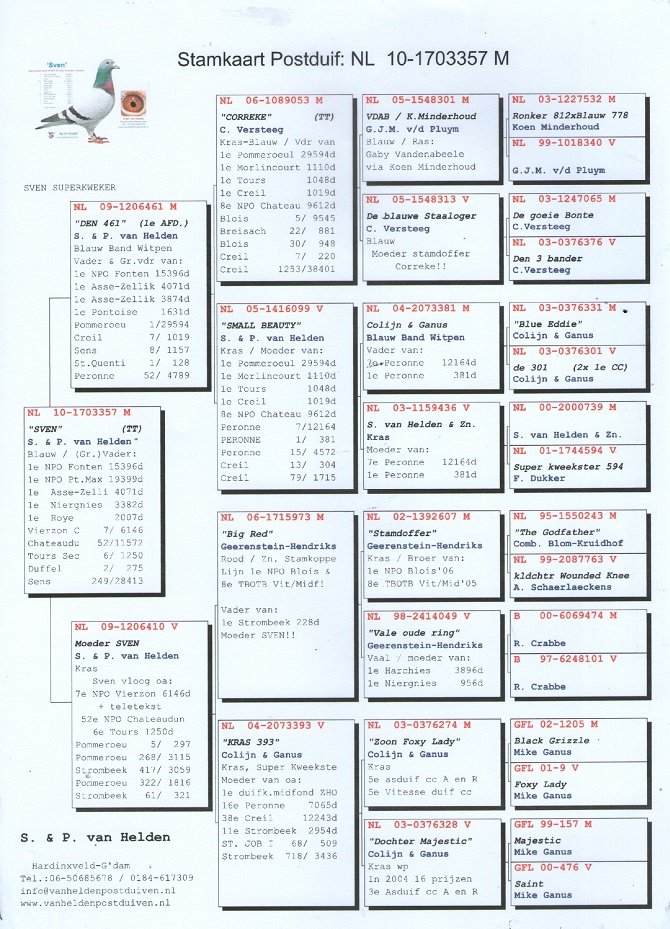 Pedigree for Sven, please note the Van Heldens have also carefully  blended in other very successful lines like they have with Kannibalina to form the high performance level of their current team 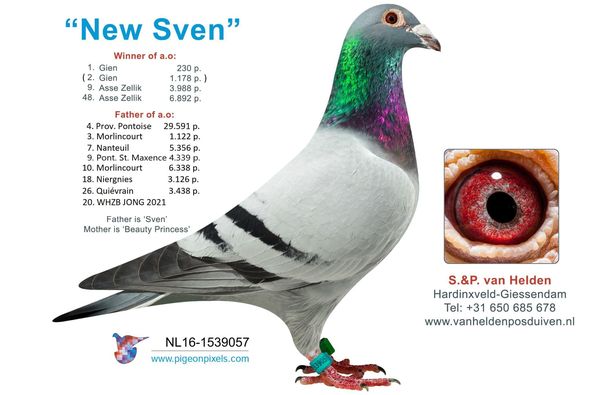 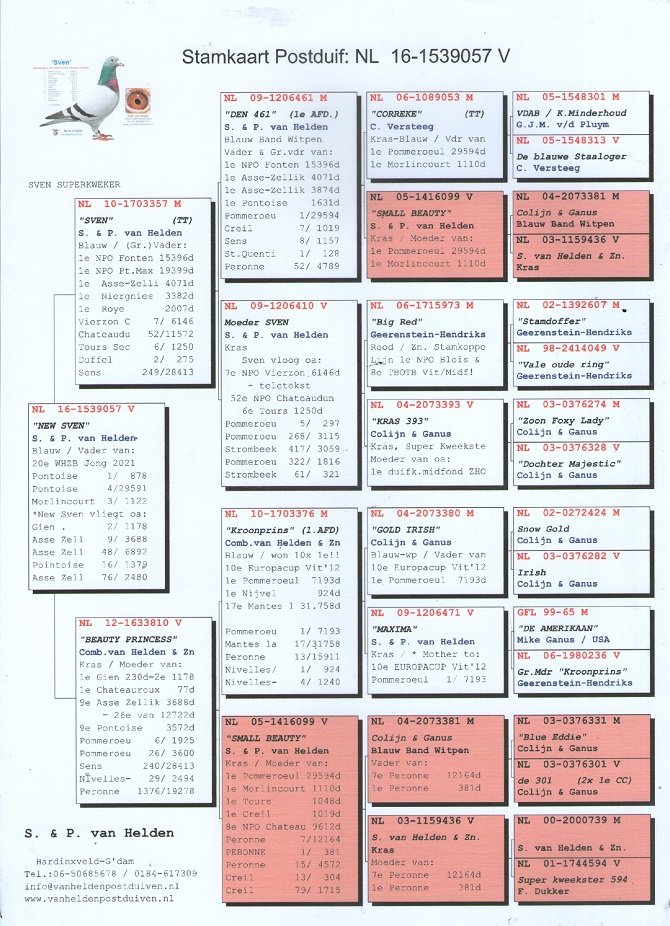 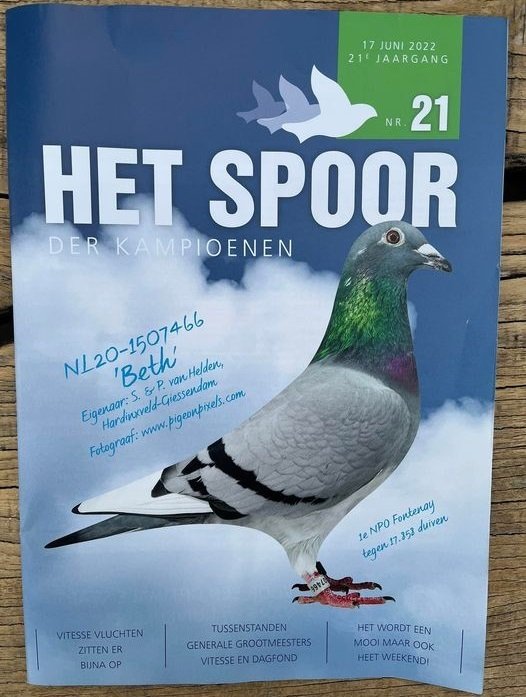 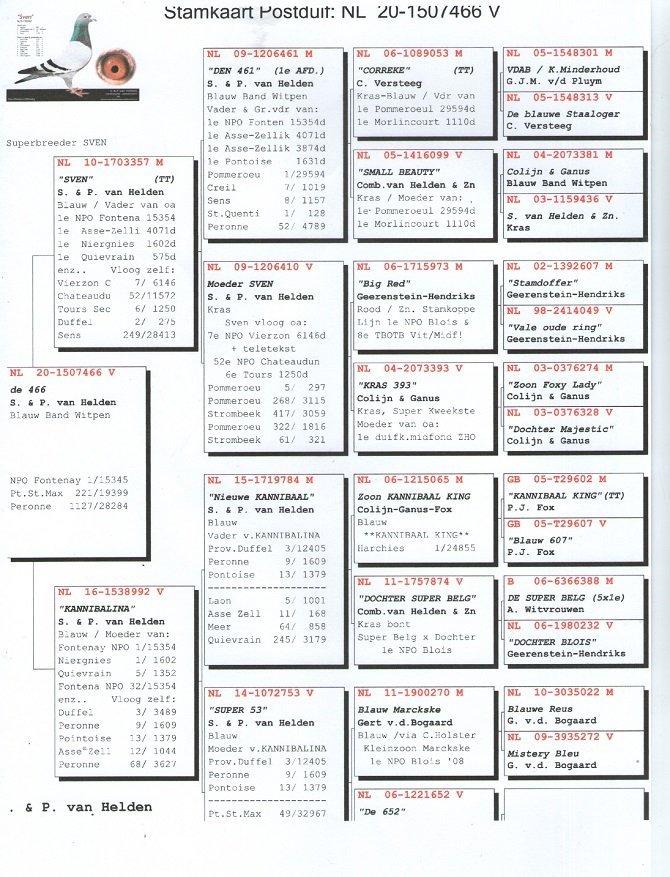 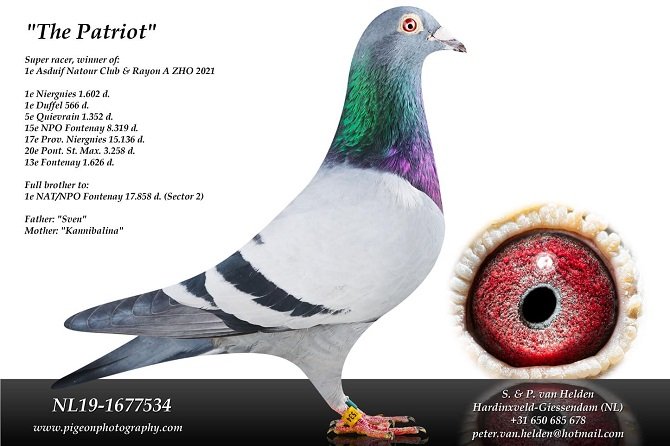 The Patriot another super racing son of Sven x Kannibalina top prize winner and developing into a very good breeder. 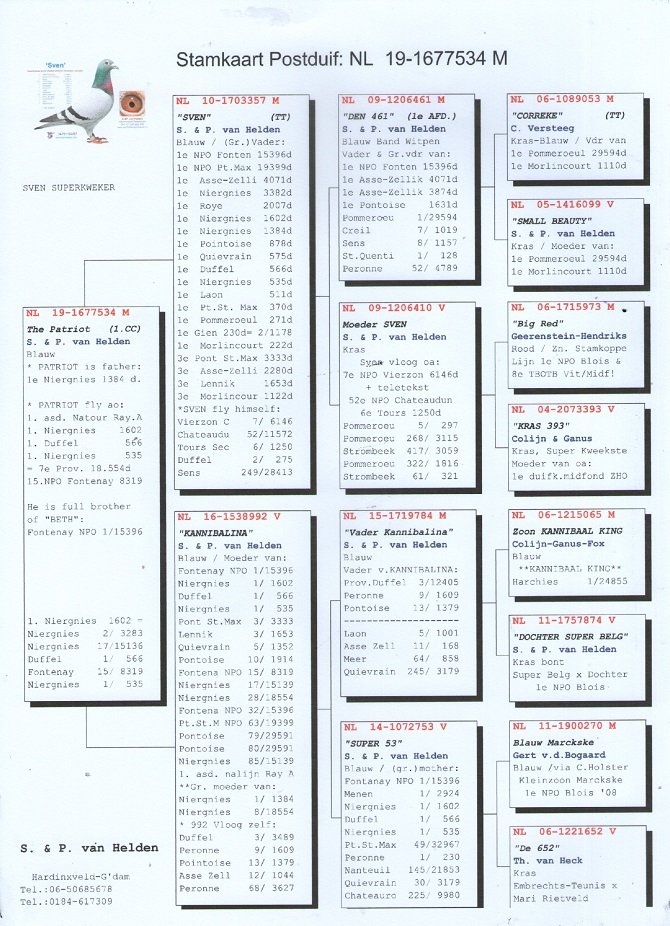 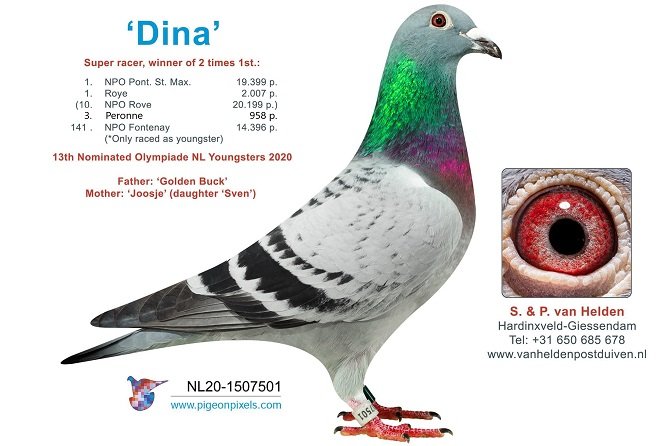 Dina granddaughter of Sven (With a not bad pigeon from Martin and Buck de Krijf!) winner of 1st NPO Pont St Max 19,399 birds.

“Hi Peter and Peter,
Summer 2020 we shared with you that our BETH won the 1st National Fontenay! Beth was a decendant of your Kannibaal King family.
We are happy to share something more about the breeding performance of our hen KANNIBALINA.
As the name already suggests, Kannibalina is a descendant of your Kannibaal King. Better said, a grandchild of a Son Kannibaal King. Kannibalina was a good flyer, after 3 years on the racing loft, she has been on the breeding loft since 2019!
In 2019 she was in the late spring paired for the first time to our Super breeder SVEN. We bred 2 youngsters, 1 became our super cock, Patriot 534. As a late youngster nothing special as he was undisturbed.. but we liked him very much as he was always perfect, muscled etc. So we decided to breed 2 rounds from Sven and Kannibalina in the early 2020. We bred 4 beautiful youngster and raced them on the young bird flights. 1 of this youngsters was “Beth”, se fly 1st NPO Fontenay 17.858 (National – Sector 2). Other one is 20-483, this cock is also performing very well in 2022, together with his brother Patriot 534! They were almost every flight in the first drop.
Also last Saturday, we had 1 till 5 against 535 pigeons in the club. Our first was Patriot 534, 2nd was a son of BETH! and 5th was brother of Patriot and Beth, the 20-483! Provincial Afdeling 5, we achieved also a very good performance with 7th, 8th, 11nd, 12th and 28th against 18.554 pigeons!
All 5 were children or grandchildren of SVEN!
SVEN is our foundation cock! Incredible the results we have with him on the breedingloft and other people have with his descendants.
As a racing cock he was very good on the hard races. He raced 7e NPO on a very hard Vierzon (NO wind, sunny and hot, <1080 mpm)
Unfortunately Sven died in September 2021, but we are happy to have good breeding children and grandchildren of him on our breeding loft, as New Sven, Joosje, Olieman 771, Beth, Dina, etc.Also we still have a few children from him on the racing loft. He is a grandson of our basecouple Correke x Small Beauty.
Small Beauty is bred from a direct Colijn cock, we get from Peter as an egg in 2004. He is from 03-331 Blue Eddy x 03-301
The mother of Sven is bred from also a direct Colijn hen, we get a an egg in 2004. She is from 03-274 Son Foxy Lady x 03-328 dochter Majestic
So SVEN is 25+12.5% Colijn-Ganus origin.
Also when you have a look at the pedigree of our promising breeder “New Sven”, you see he is a son of SVEN and little inbred to our foundation hen “Small Beauty” together with the “Kroonprins”, who was a very good racer, 75% Colijn-Ganus-Fox blood.
So, the old Colijn-Ganus-Fox pigeons belong to the basis of our currently built strain of pigeons. Almost every weekend we enjoyed the performance of this pigeons. Happy to share this info with you both. Thank you Peter and Peter!
Please find attached some information.
Kind regards,
Sim & Peter van Helden “

Well quite a long post but I think quite interesting. Once again I must ‘tip my hat’ to the Van Veldens, Top pigeon fanciers and really good people. They are amongst the very top of the Netherlands with a small loft. Skillful fanciers and a great eye for new blood to enhance what they have worked on for many years . Improving as they move ahead.