Well its not everyday we have a hand in producing a National winner from over 15,000 birds and its very welcome when it happens.

Yesterday S & P van Helden of Hardinxveld won 1st NPO Fontenay in Rayon 5 that is the entire South Holland against some of the biggest names in the pigeon sport with blue white flight hen NL20-1507466 ‘De 466’.

Mr van Helden used to live in Nieuwendijk before moving to Hardinxveld and is a friend of Hans Colijn. This resulted in a few gift birds and one was a direct son of our great cock ‘Kannibaal King’ a son of our ‘Young Couple’ and a terrific racer and breeder. This cock was hatched in 2006 when Kannibal King was at the height of his racing power. He was coupled to our top hen ‘Blauw 607’ a daughter of Kleine Gerard a youngster we bought from Gerard Koopman in the Autumn of 2002 being bred direct from Amore the hen that would subsequently win 1st Dutch National Ace and become very famous as a world breeder including her daughter Dirkje who later became the mother of ‘Harry’ of Jan Hooymans. Mother of ‘Blauw 607’ was ‘Poppy’ one of our very best direct daughters of ‘Kannibaal’ Dirk Van Dyck.

‘Kannibal King’ with ‘Blauw 607’ in 2006 also bred our ‘Lady King’ (Not to be confused with Lady King of 2011)  another fantastic race hen that would become a fantastic breeder after winning 1st Pithiviers 858 birds and 14th National NPO against 12,842 birds as a youngster.

‘The gift ‘Zoon Kannibal King’ bred for the Van Heldens ‘Nieuwe Kannibaal’ a cock that scored himself and bred ‘Kannibalina’ a winner of 3rd Provincial Duffel against 12,405 birds and she bred yesterday National NPO Fontenay winner.

The attached pedigree also shows ‘Sven’ the father of the Fontenay winner and he is the base pigeon from the Van Heldens. His is also descended from another gift ‘Kras 393’ that became the mother amongst others of 1st As Duif Mid Fond ZHO. She was bred from a ‘Zoon Foxy Lady’ (Again not be mistaken for the current Foxy Lady of 2014) and she was from the magnificent Ludo Claessens blood paired to a daughter of ‘Majestic’ winner of 1st Dutch National Ace Mid fond owned by Mike Ganus.

Nothing is new other than fashions. Yesterday S & P Van Helden won 1st National NPO Fontenay against more than 15,000 entries with a bird from generations of tried and tested performers that continue to produce top performers. 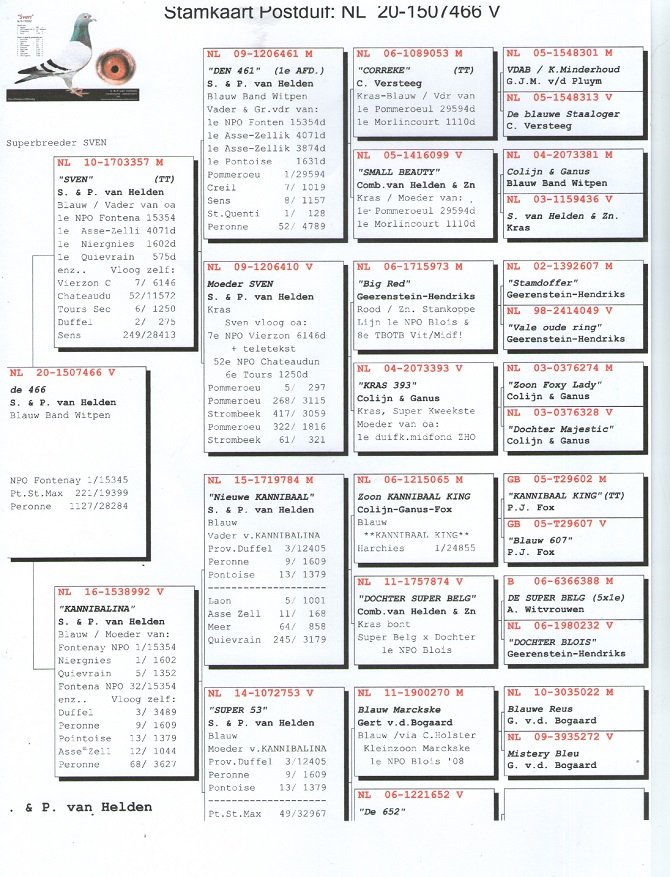