When suddenly Siebe Eyckmans from Grobbendonk was standing at the top the provincial result, many fanciers raised their eyebrows because that was a name they had never heard of. Siebe, however, turns out to be the 3-year-old son of Ronnie Eyckmans and Sarah Huysmans, and Sarah is the daughter of Paul Huysmans and Marina Van de Velde.

We had an extremely proud grandfather on the phone.

Paul: “Ronnie and Sarah live 100 meters from us as the bird flies. They live in Marina’s childhood home, although the old house has been completely demolished and they have built a completely new house.

Sarah is still secretary at Duivenbond Vorselaar, and also has her own loft in the garden. There she has raced for a few years, but time is lacking. They both work for the police. Shifts, night shifts, you name it, not easy.

Marina had to put more time into managing the pigeons as Sarah herself had so little time. So they stopped racing there for the time being, but that was not what her son Siebe (three years old) wanted. As young as he is, he is already crazy about pigeons. He’s with us six days out of seven, and in the holidays for almost two months. You can’t imagine, if he has the chance to be in the pigeon loft he is there. Every time he comes to get us because voke and moeke have to go to the pigeons. So we made him a member of the pigeon federation and he has his own pigeons among ours. Especially white and reds, but also some others. He knows them by the colour or by the clip rings.

So he’s not just like Sarah in appearance, because she was always among the pigeons at the age of three! Siebe likes to come along training, we drive regularly to Mechelen and then he must come with us, but he asks before we go if he can definitely let them go.

Some time back we bought an electric car for him. I regularly put 1 or 2 youngsters in the basket and say go and train them. Then he drives to the gate and lets them go there. 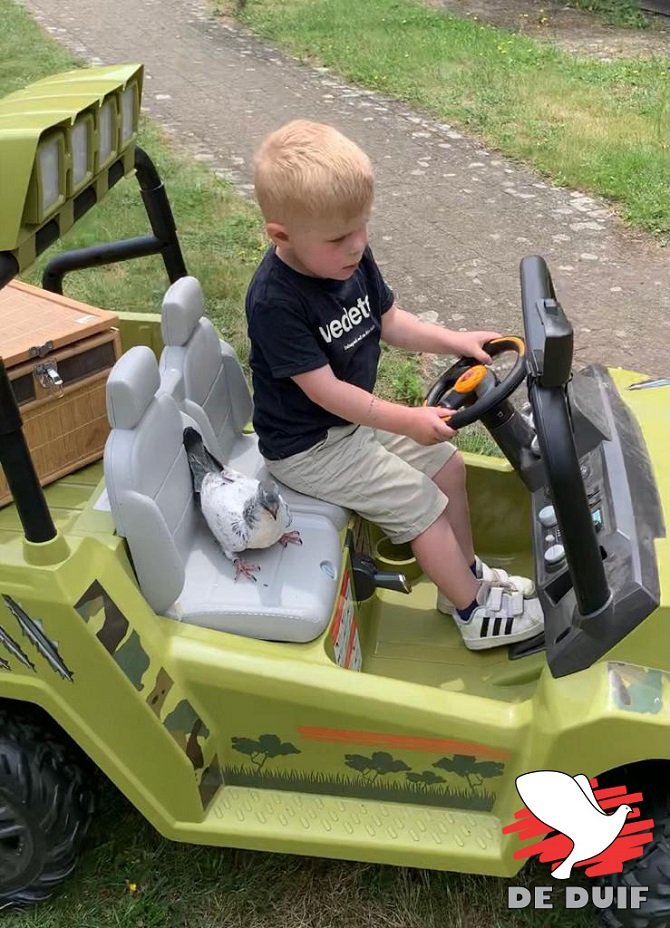 If Sarah has time, she will come here and help with the pigeons. I’m old and worn out, and have said it before that I’m getting rid of them, but she will not allow me to.

This year it went completely wrong with the youngsters. I had a month where I could not go to the loft myself, and then my brother also died. The pigeons have been a bit left to sit around. However most youngsters have now done 3 x Quievrain in a week, and yesterday (Sunday) their first Noyon. So we know they are well.

We have raced a number of pigeons a bit further including 21-050, a hen brooding on 14 days eggs for Siebe. She raced 4 x Quievrain (only one time early), 1 x Noyon and the week before Argenton she went to Sermaises. We named her “Marie”. Twenty years ago we won 1st Nat. Argenton with “Samson” (name given by Sarah) so this seemed appropriate to us.

Her father is 860-16, a grandson of “Gilbert” of Leo Heremans. And the mother comes from a son of “De Jan” x “Granddaughter Olympiad”.

As mentioned, the youngsters are mixed up. They are darkened but not parted. There are a lot of them now on eggs. The intention is to race them once more from Noyon and Melun to prepare for the last Chateauroux.

What Siebe wants to do with his “Marie”, we do not know yet!”