Some Reinforcements For Our Breeding Lofts… from Luc and Hilde Sioen, Moorslede….

Some Reinforcements For Our Breeding Lofts… from Luc and Hilde Sioen, Moorslede…. 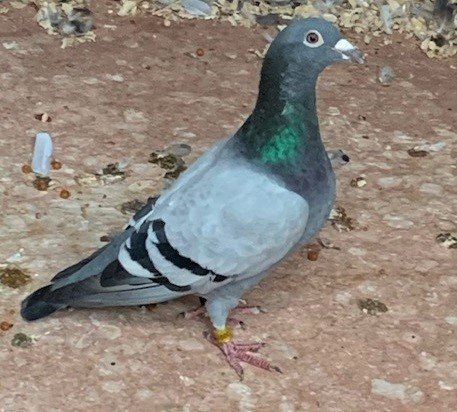 ‘Blue Spider’ a new introduction from Luc and Hilde Sioen, a direct son of the incredible breeder ‘Spidey’. Luc selected him for me as a yearling as he had matured into a typical example of his current winners and contained the ‘Spidey’ and ‘Anouk’ bloodline I asked for. 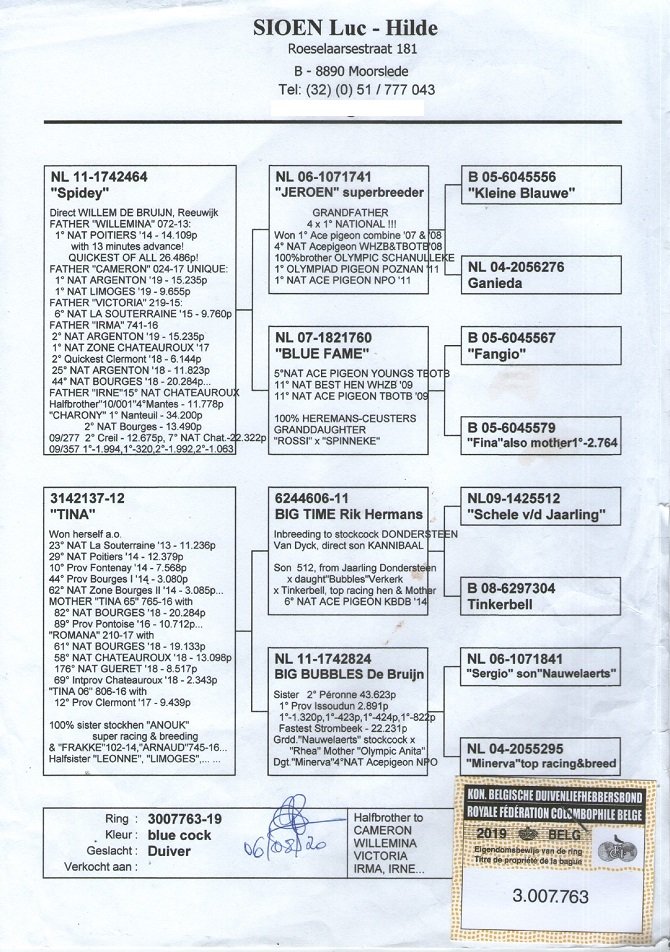 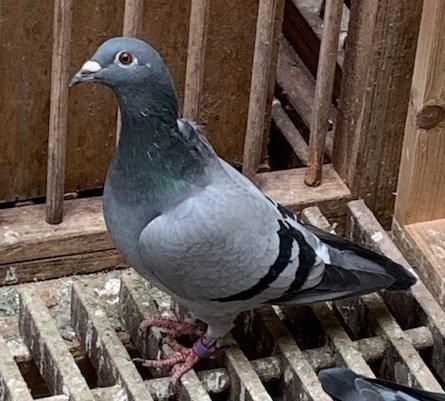 ‘Annika’ another new introduction to our breeding loft from Luc and Hilde Sioen. She is just perfect and is just the type and bloodling we were looking for. 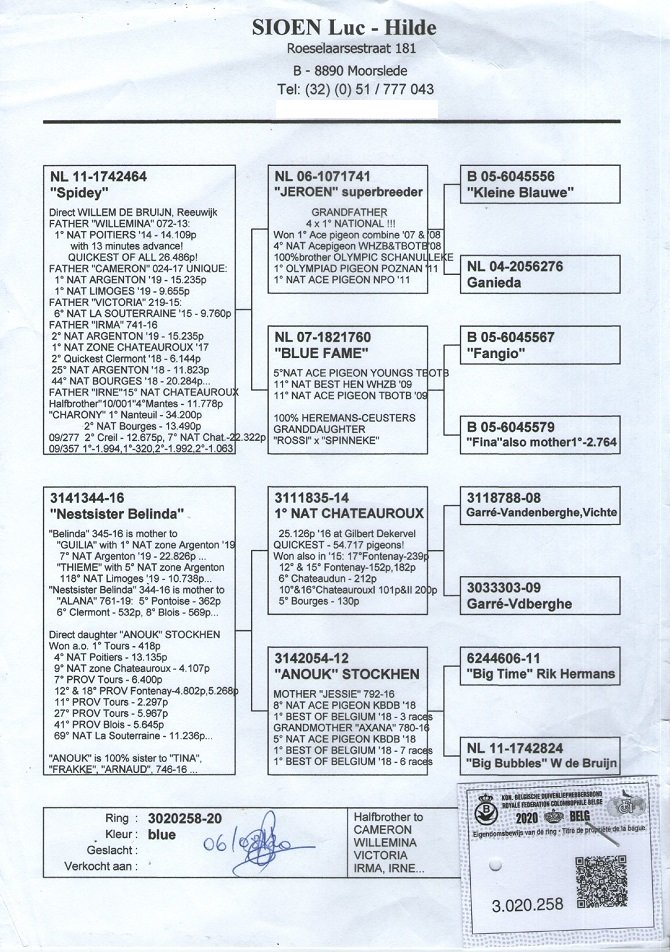 ‘Treasure’ a direct daughter of ‘Spidey’ this time with a daughter of ‘Anouk’ when she was paired to 1st National Chateauroux against 54,717 birds. His bloodline is Garre-Van den Berghe renowned local fanciers that specialised in 500 to 900 km National racing over many years.

Luc Sioen and his wife Hilde from Moorslede, West Flanders are what can only be described as ‘Dyed in the wool’ pigeon fanciers. Any fancier meeting them either ast their lofts or at any of the award ceremonies they have to attend , can only be impressed by their enthusiasm , dedication and passion for their sport.

Luc is of course from a long traditional pigeon fancying family, and I was reminded of his great history when we translated and published a two part article by the excellent journalist  Michel Bommerez for the ‘Duif Chronicles’ on our website. They are a comprehensive and compelling story of a family with the Pigeon Sport in their blood.  If any fancier is feeling not as enthusiastic about the sport as they once did, I would recommend you visit our site and read the articles for a reminder of why we love this sport in the first place. I have included a few articles in the posts below.

Since we published those articles five years ago, Luc and Hilde have simply ‘Flown the stars from the sky’ as the Belgians put it, with their stratospheric National results.

Luc and Hilde have two main bloodline threads running through their team and that is ‘Spidey’ probably the best breeding cock in the current pigeon sport and ‘Anouk’ their foundation hen.

‘Spidey’ was bred by Willem de Bruijn (That name again!) and as his name implies he is descended on his dams side from the world famous ‘Rossi’ and ‘Spinneke’ of Hermans Ceusters from a time they were at their brilliant best. The sire of ‘Spidey’ is ‘Jeroen’ a grandfather of 4 x 1st National winners and a full brother to Willem de Bruijn’s famous ‘Olympic Schanulleke’ winner of 1st Dutch National Ace NPO in 2011 and 1st Olympic Ace Pigeon in Poznan 2011. They are from the ‘Kleine Blauwe’ bred by Heremans Ceusters and a foundation breeder of De Bruijn’s current world class bloodline.

The breeding record of ‘Spidey’ is astonishing having bred into the second and third generations multiple performance Ace Pigeons KBDB and National winners.

Then in 2019 Luc and Hilde shocked the pigeon world with ‘Cameron’ another daughter of ‘Spidey’ in fact a full sister to ‘Willemina’ when she won 1st National Argenton 15,235 birds beating another daughter of ‘Spidey’ into 2nd National, then two weeks later 1st National Limoges 9,578 birds! The question was asked ‘Is she the best ever racer in Belgium’ and most could of think of any better, especially as her previous record as a yearling was also really good including 28th National Chateauroux 13,098 birds.She was subsequently sold to a Far East fancier for an astonishing sum (rumored from good sources €800,000).

Another very important reason we wanted these lines is ‘Blue Flame’ the dam of ‘Spidey’  is also dam of the mother of ‘Murphy’s Law’ the new standard bearer for Willem de Bruijn and in our view one of the strongest performance bloodline available at the moment at all levels and for many fanciers. 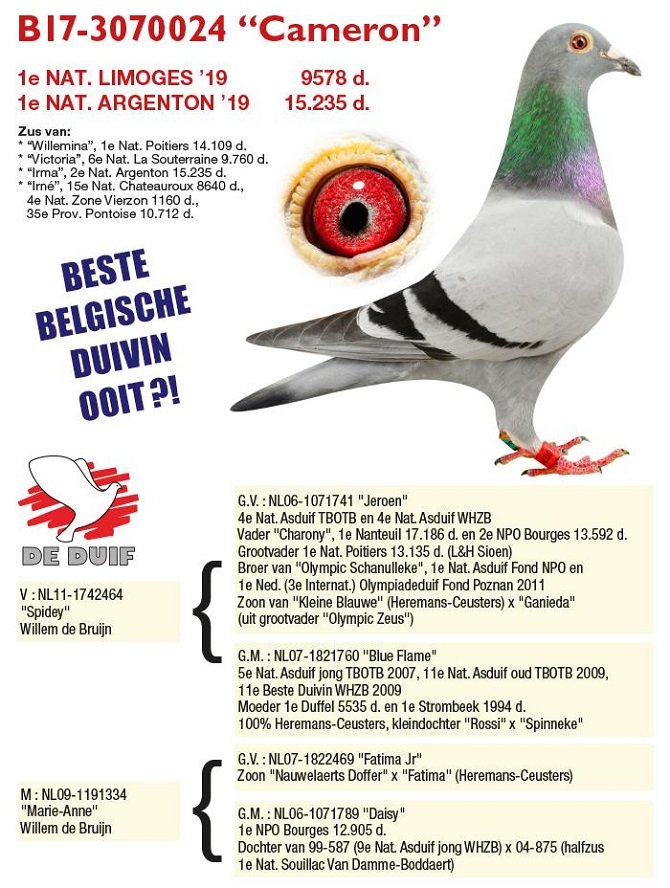 The other great bloodline of Luc and Hilde is the incredible ‘Anouk’ a top National and Provincial racing hen and she became a foundation hen for them. Apart from ‘Anouk’s direct children with many cocks being top fliers, she also had three fantastic sisters. Again the bloodline is Willem de Bruijn but this time crossed with the inbred ‘Dondersteen’ bloodline  through Jan and Rik Hermans Schele van de Jarring and Tinky. Absolutely fits our future breeding plans to a ‘T’. 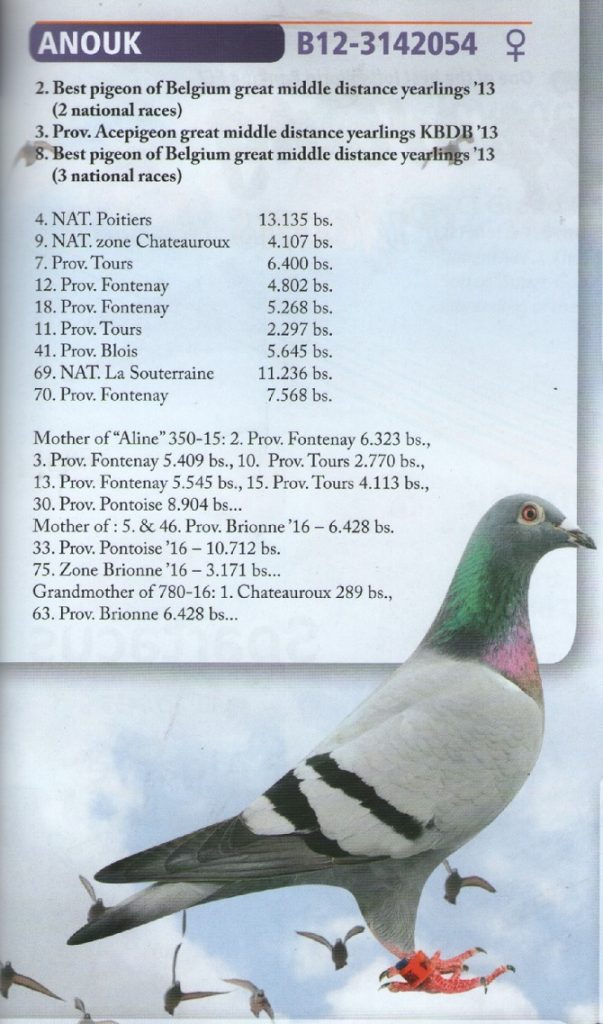 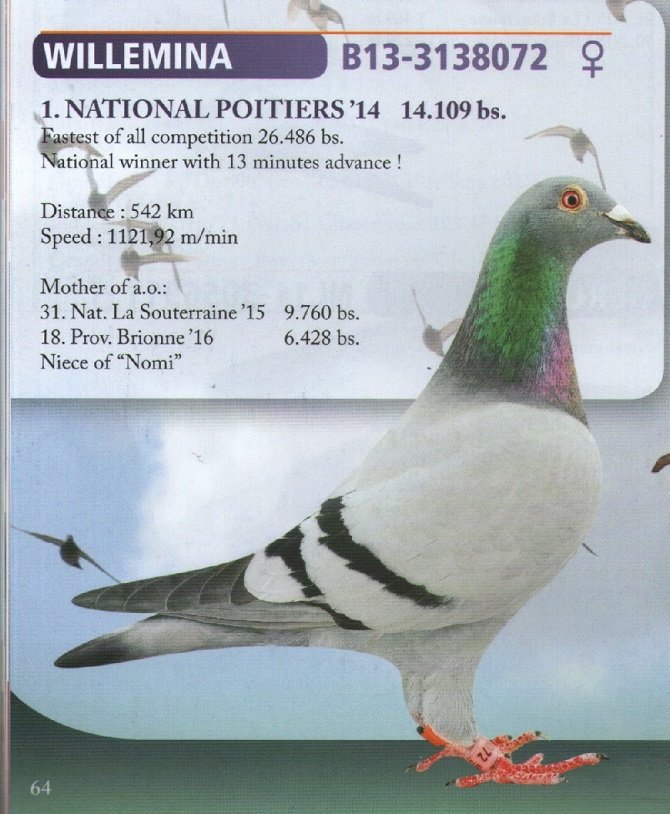 ‘Willemina’ 1st National Poitiers 14,109 birds by 13 minutes in advance and 1st overall liberation against over 26,000 entries. She is another daughter of ‘Spidey’. 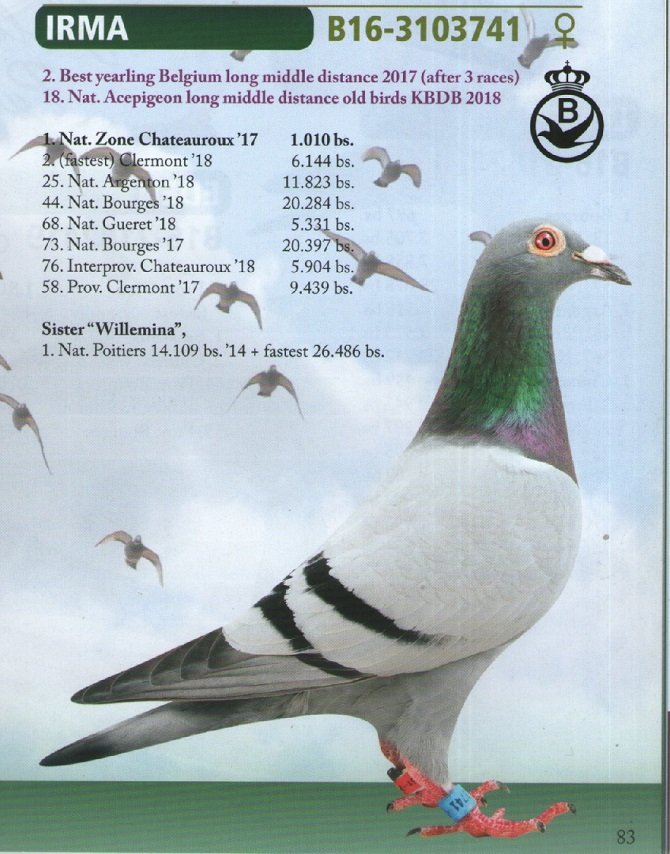 ‘Irma’ another daughter of ‘Spidey’…

‘Nomi’ another 1st National Poitiers winner against 13,134 birds bred from a half bother of ‘Spidey’ again a direct son of ‘Jeroen’. 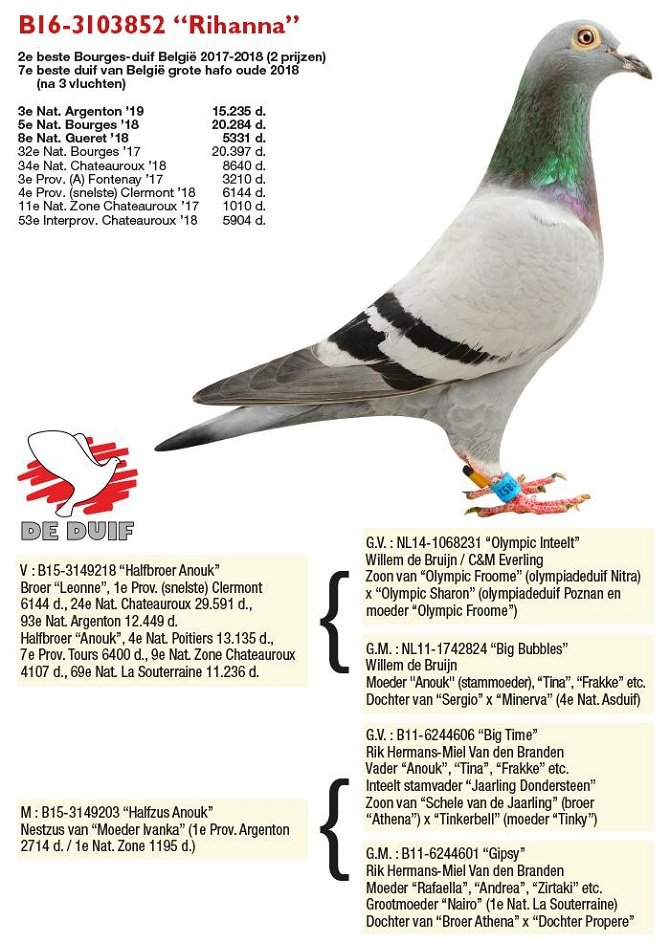 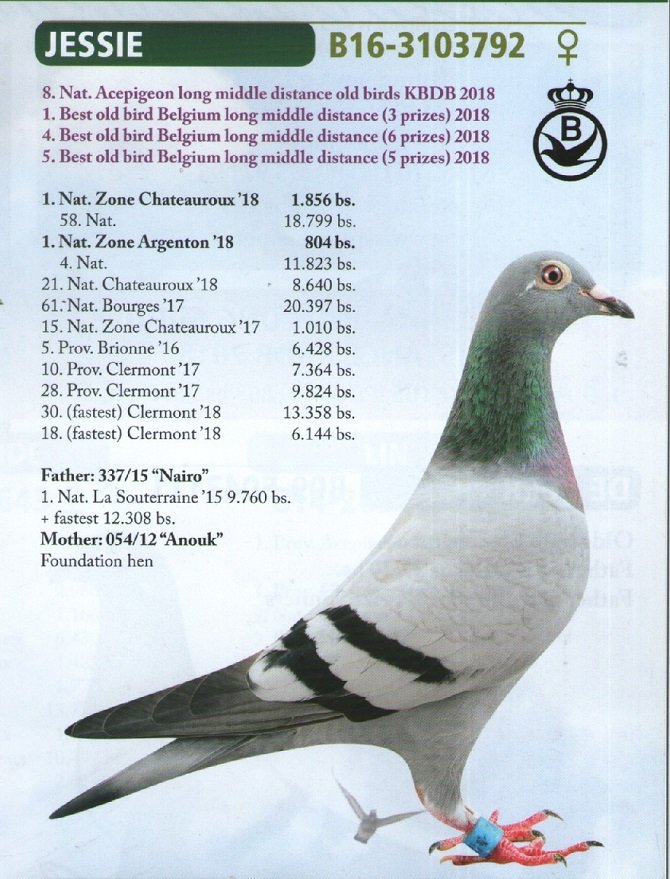 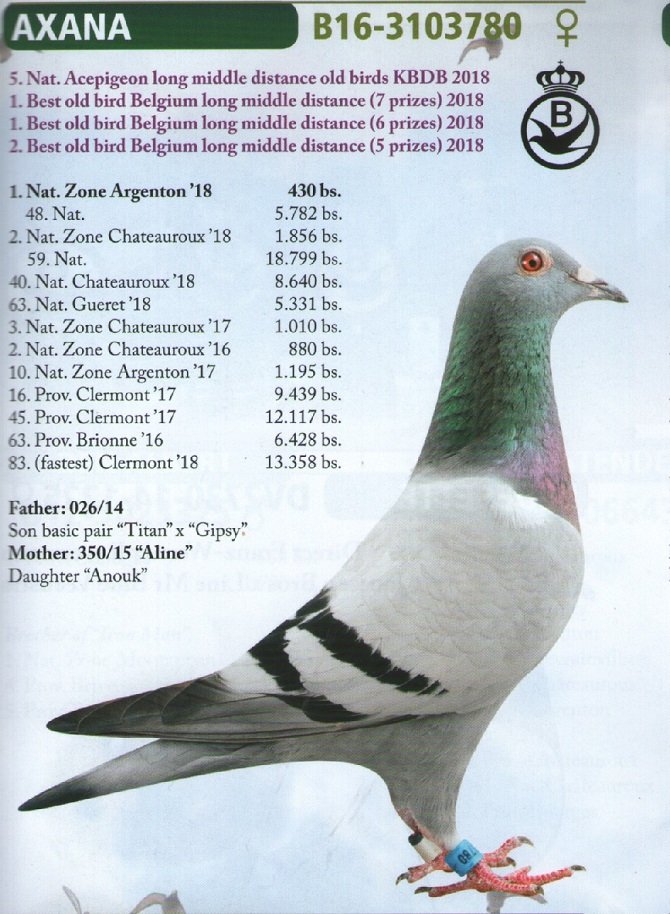 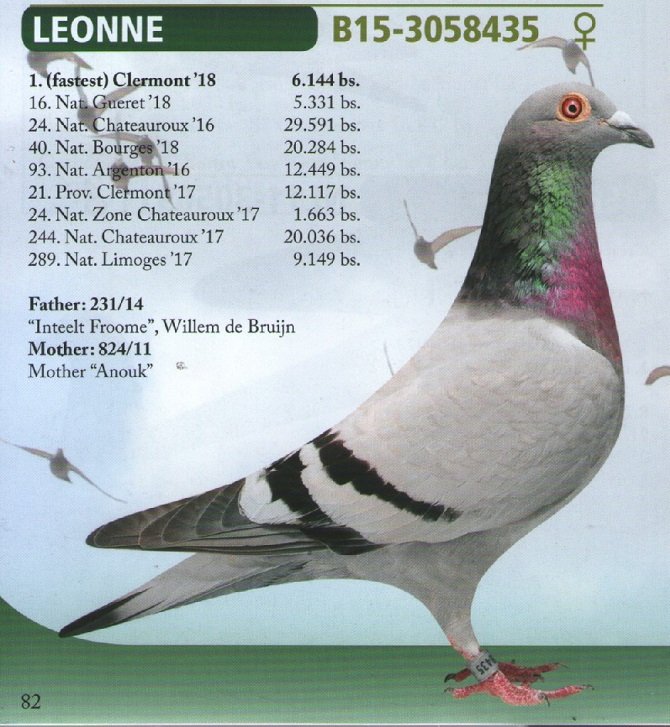