Tim Atkin ~ Having An Outstanding Season!

Tim Atkin ~ Having An Outstanding Season!

Tim Atkin of Warwickshire is a fancier of the very highest ambition. His results in the last few seasons have been nothing short of ‘fantastic’ in the Warwickshire and District Federation with regular drops of 5 or 6 or 10 or even 14 birds to win the Federation comprehensively.

Tim is renowned as a fearless buyer to obtain the very best of the best lines for his breeding loft that includes many top birds from Jan and Rik Hermans, Danny Van Dyck, Ullrich Lemmens as an example and these lines he uses with devastating effect with the foundation breeders of his loft that are direct children of ‘Propere Rik’, ‘Propere 10’ and ‘Foxy Lady’.

This season Tim can report winning in his Federation Old Bird program only against an average of 1700 entries 4 x 1st, 3 x 2nd,1 x 3rd,1 x 5th,and 1 x 7th. These are the results of his first birds only with many more loft mates often queuing behind for the remaining positions. Plus topping the Fed in his first Young Bird race with a grandchild of Propere 10 x Foxy Lady.

Tim has an exceptional two year old cock this year that having scored well as a youngster and yearling has hit top form this season winning 1st Fed 1008 birds, 1st Fed 1537 birds, 2nd Fed 2103 birds, 3rd Fed 1725 birds and 7th Fed 1316 birds.  This super cock was bred from a direct son of one of our very top breeders ‘Propere Rik’ x ‘Eleven’ (Daughter of Hannibal x Genie) when coupled to a direct daughter of ‘Kanon’ of Danny Van Dyck’s.

Tim’s results can only get better and better in the coming seasons as he not only has a very well thought out  and well resourced breeding strategy, but also a single minded focus on winning! 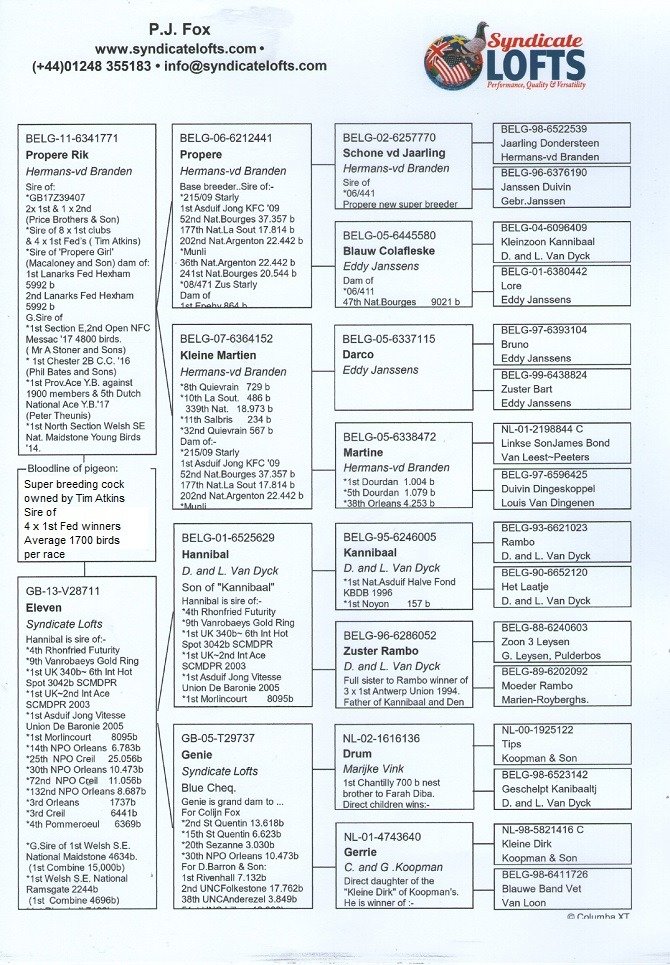 This is the pedigree of Tim’s good young breeding son of ‘Propere Rik and ‘Eleven’ that is sire of his sensational two year old racer this season! 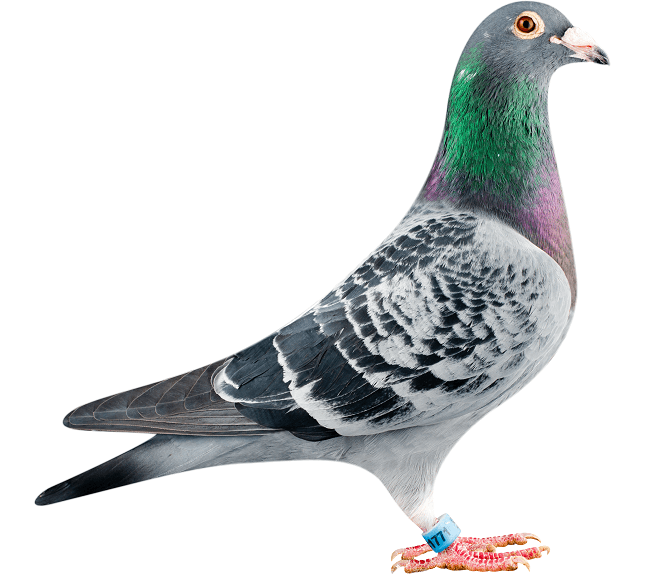 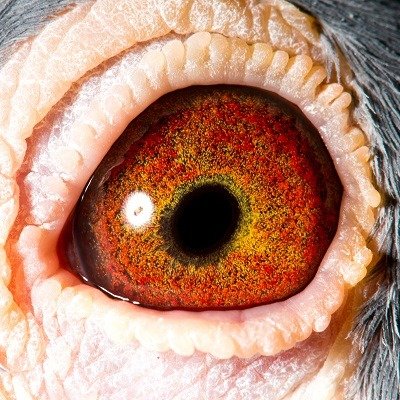 He was retained by Hermans/ Van den Branden for their own stock loft because of his obvious top quality and was destined to be coupled to one of Riks many World Class racing hens and it was only through our great friendship and Jan’s generosity that we managed to transfer this cock to our own breeding loft in North Wales.

He has now had five full breeding seasons with us and he has produced some really top performers in Federation,Combine,National and Classic races. Justifying the confidence that Jan Hermans had in him as a young cock.

Propere Rik has establishing himself as one of the very best in our breeding loft…The sire of Propere Rik is Propere one of the greatest breeding cocks in the Pigeon Sport of the recent generation.

Many  Club , Federation, National, Classic and One Loft race prize winners have been reported in a short time. One of his first youngsters when he was paired to ‘Athenas Best’ was a late 2013 hen that Phil and Neil Bates  of Bagillt bought at our Blackpool auction and in her first nest bred their 1st North Section Welsh South East National Flying Club from Maidstone in 2014.

‘Jennifer Lopez’ also bred ‘Handsome Harry’ that as a youngster in 2015 won 1st Club,2nd North East Wales and West Wirral Fed and 2nd Flint Gold Ring race from West Bay only beaten by a fancier flying 14 miles shorter and in the east.

Yet another daughter from ‘Propere Rik’ paired with ‘Sunday Girl’ is ‘Propere Girl’ a late bred from 2017 now owned by the Macaloney Family in Scotland. It was in 2019 that they first raced the offspring of her as yearlings with great success including winning 1st and 2nd Lanarkshire Fed from Hexham against 5,992 birds with ‘Hercules’ and his sister ‘Next Time’!

In 2017 we coupled ‘Propere Rik’ to ‘Foxy Lady’ the incredible racing hen and in their first nest only one hatched. This was gifted to Price Brothers and Son of Stourport who raced ‘Foxy Lady’ and the youngster became the first one ever raced directly from her. The results in that years tough young bird season was inevitable!! The young hen’Double First’ won Two x First in the club against and average 260 birds plus a Second prize timed behind her loft mate. She would have won another three prize cards except for the two bird clocking limit.

A son bred direct from ‘Propere Rik’ when paired to ‘Foxy Lady’ is now owned by Howard Jackson from Yorkshire and when coupled to a daughter of our Johannesburg x Maxine bred Six x firsts clubs in two seasons!

The final of the 2019 South Africa Million Dollar Pigeon race that turned into a tough affair with just over 300 birds home on the day of the 2,531 entries from 531 km. Kevin Hibbert of Hibbert Brothers , Rotherham reported a quite fantastic performance with two of their entries , in the Paul Smith Syndicate. They won 33rd and 49th Open with the second arrival (First arrival was from our Tempo x Little Star lines) ‘Stanstead Gold Bullet’. We bred her mother from ‘Propere Rik’ with ‘Carmen’ a top breeding daughter of Drum and Gerrie.

This is just a selection  of results for various fanciers ‘Propere Rik’ who has had an immediate impact on our breeding plans in a very short space of time, when he was coupled to various hens!!  Just like his brothers and sisters from the super pair ‘Propere x Kleine Martien’…