‘The Duif Chronicles Online’ …by   www.syndicatelofts.com

Berlaar – It was a disastrous pigeon weekend. Many partners of pigeon fanciers aren’t going to be happy this week, their other half won’t be the happiest in the house. Also for Walter Roziers (62) and his pigeon companion Jan Fierens (62) Brive was a tough race. They had entered seven pigeons and at the time of this article (Tuesday afternoon) there were four not yet home. Yet these two gentlemen had reason to pop the champagne corks.

Berlaar, is located on the Nete between Lier and Heist-op-den-Berg. It is therefore safe to say that ‘Balder’ is at the epicentre of Nation and therefore also the International pigeon sport. The number of top fanciers in this region is immense. So whoever’s the best here is really good. The competition is strong, but Walter, a retired welder, and Jan, a retired diamond worker, certainly don’t do too badly; in 2016 they already made the front page of the Duif newspaper with a National victory from Agen.

Father August “Gust” Roziers started back in 1965 with the pigeons. Grandpa was also a fancier. The Roziers are therefore a real pigeon family, Jelle Roziers (Itegem) also belongs to this pigeon clan. From within its “solemn community” is Walter, de Wakke, also inspired by the pigeons and in recent years he and pigeon friend Jan have been racing from the parental house. Roger: “I’ve raced elsewhere, too, but after a divorce, I came here to be able to race with the pigeons.” 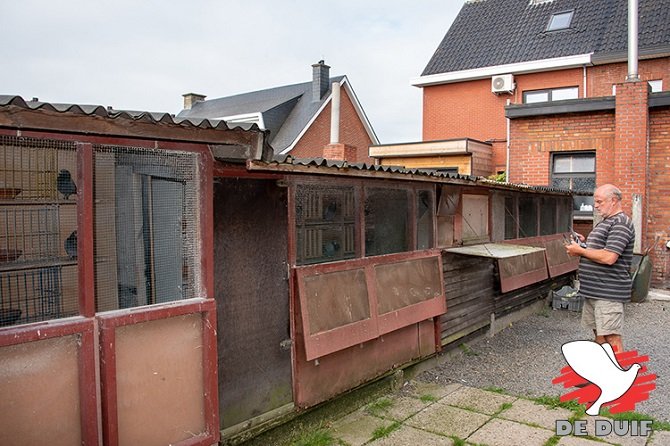 Father Gust’s pigeons still form the base of the colony in Berlaar. These were supplemented with blood from other renowned fanciers such as Walter De Rijck, Jos Thoné and Jef Houben, names that you can count on. The winning bird also had some Gaston Van de Wouwer in the pedigree. Walter and Jan clearly know where they have to go get the right pigeons, meanwhile others also come to get pigeons in Berlaar. Peeters-Van Crombruggen (Nijlen) were among others already successful with what they have purchased from Walter and Jan.

In the loft in Berlaar there are 25 breeding couples and every year about 100 youngsters are bred. Walter races classic widowhood with 25 hens and 50 widowers with a permanent partner at home. Only the youngsters get to see the partner before the flight, the older ones may only return to their partner. The hens started the season as widows and now they are raced on the nest.

For example, there are now 8 hens in the basket for Agen. Only the young hens are darkened until the end of June. Since the last Quiévrain they have been in the light for a week now, all this to be ready for the nationals. The cocks, and so also the winner, will be in the light by the end of July

Walter says:”We drive with the youngsters once, twice or three times, not too far, Vilvoorde or something. The old birds are hardly trained by road, only exercise around home in Berlaar and sometimes they go once training by car at the beginning of the week to Brussels. 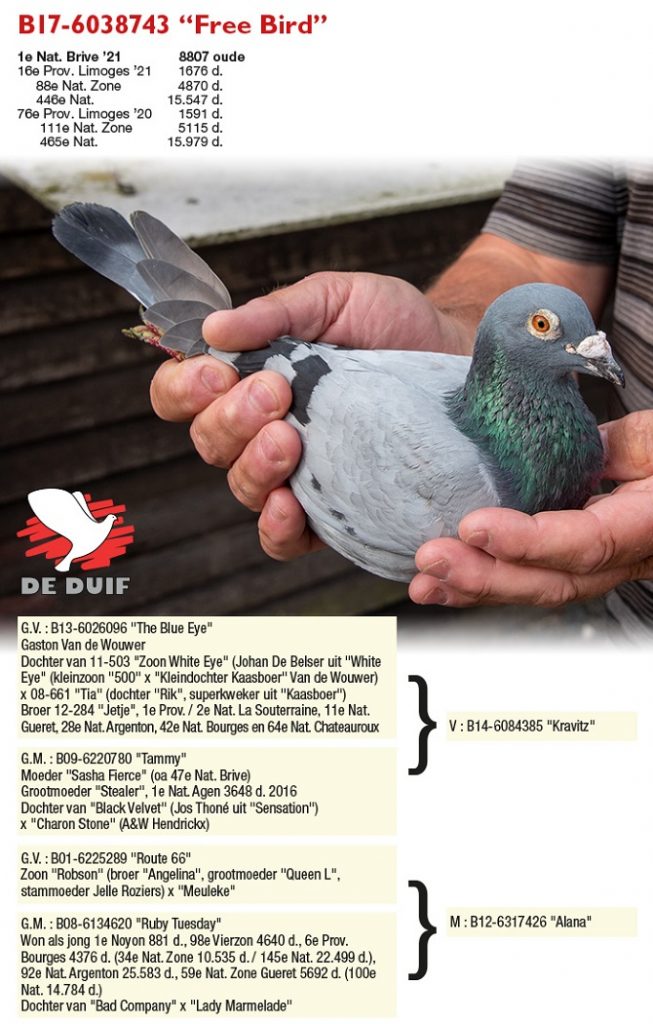 Walter and Jan are very down-to-earth “no nonsense” guys like you find here in the area. Just be normal, that’s enough! This is reflected in their pigeon game. No extra motivation, no complicated feeding schedules, no shopping list of by-products, everything just very ordinary.

There is a cure against the respiratory and the pigeons of course receive the mandatory vaccinations. They are certainly not blindly cured. Twice per year they go to the vet. They have enough experience and of course keep a close eye on the health of the pigeons, but as long as nothing is wrong, there is no need to do anything, and that is their down-to-earth motto.

Also in terms of feed, you don’t have to expect any surprises from the Berlarenaren. Upon the question of whether he gives a specific brand and feed type, Walter answers quite firmly: “No! I buy some bags of food, something simple cheap and I mix myself. My father already did it this way. He mixed everything into a big zinc barrel and I actually still follow the “recipe” of the Gust feeding. At the beginning of the week we feed lighter and as the competitions are getting tougher the feed is heavier.

After a nerve wracking weekend and an even more nerve wracking Monday the gentlemen saw “Free Bird” arrive. Walter “My brother saw him first, as usual with a pigeon that wins he came from the right direction and hit the landing board like a spear”.

There are already several interested buyers and it is likely that the winner will leave the loft in Berlaar soon, the flying career of “Free Bird” is over, that of Walter and Jan are far from over. Those born and are located in a pigeon’s nest in the valhalla of the pigeon sport and are successful in the sport, never stops. He’s just looking forward to the next big flight!