Berlaar – We saw a nice piece of wing work in Berlaar! Father Wim and son Steven De Troy recorded the second national victory of this season on their list of results.

They built up their colony with the “Kaasboer” bloodline of Jozef and Swa Goovaerts, Beerzel and the “Boxer” of René Renders, Beerse. There were also pigeons from Jos and Jules Engels, Putte; Van Eynde-Goovaerts, Putte and Gaston Van de Wouwer, Berlaar. 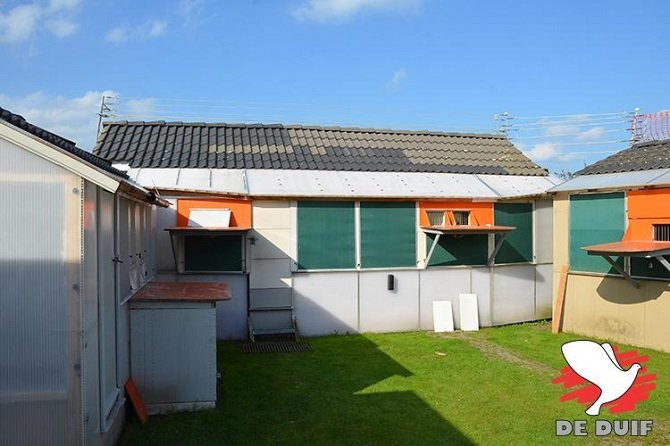 Wim and Steven started off the 2021 season with 28 widowers on classic widowhood, 60 pigeons on total widowhood and 15 pigeons for the long distance. The National winner is a hen that is raced on total widowhood. Before the start of the race season they were put together for 4 days but did not rear. Before basketing the partners meet for half an hour. After arrival from a race they can usually stay together until the evening. There is only 1 x exercise session a day.

The National winner answers to the name “Nafi” B20/6181050. It is a blue hen that has currently dropped two flights. It’s a small but nice bodied hen and she was the favourite of Father Wim. 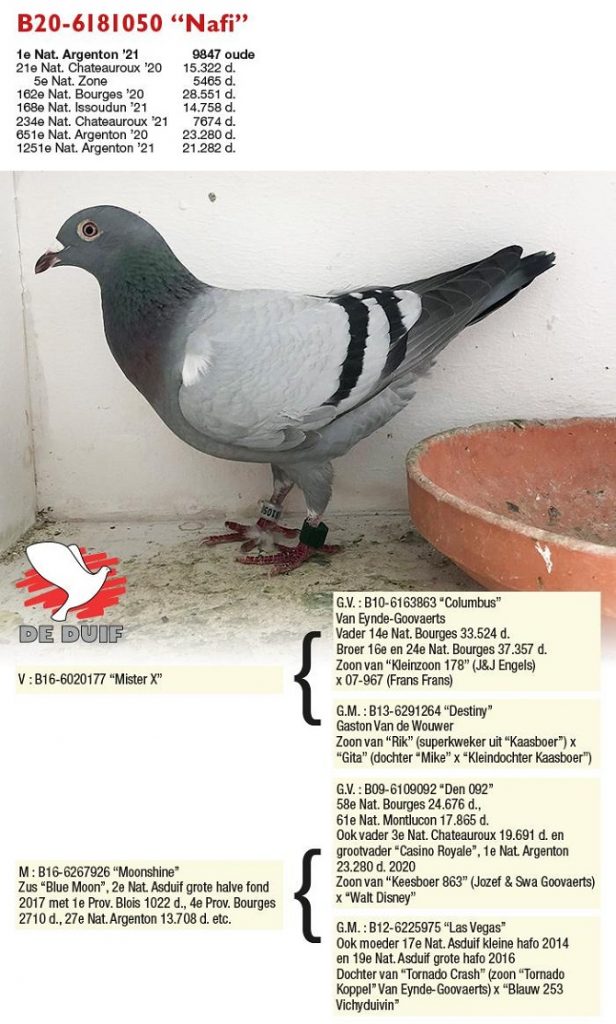 The preparatory races were 2 x Noyon and she has participated in all National competitions afterwards. Upon arrival from a competition there is “Recup” from AIDI in the drinking water. The pigeons then find a sport mixture from Houbrechts, Heers in their feeding trough.

The medical guidance is kept limited. Before the start of the racing season, in March they were treated against respiratory infections. In the course of the season they were treated twice against trichomonas. The last time it was three weeks ago. Both the widowers on the classic widowhood and the pigeons on the total widowhood need to get their motivation from being together with their partner. In the loft of the youngsters, sometimes a nest box is opened and perches are hung.

Together with the youngsters the old birds also get training flights in between races. Thus, the old birds were trained three times at 50 km in the week before basketing for Argenton.

Both old and youngsters are given quite a lot of chances when it comes to selection. Those who do not perform on the Greater Middle Distance are sent further in the one day long distance races. If this isn’t a success then this pigeon can leave.

Argenton was the last race of the season for the old birds.

Wim and Steven think the 2021 season is a lucky windfall for them. “When you get two national victories in one season, it’s hard not to think it’s a season you did well.

But we have also lost a number of good pigeons, both old and young pigeons.

The secret to two National victories in a row is difficult to explain. The pigeons get very good care. Medically, it is also looked at but we find the road training in between races of both old and youngsters is very important”.